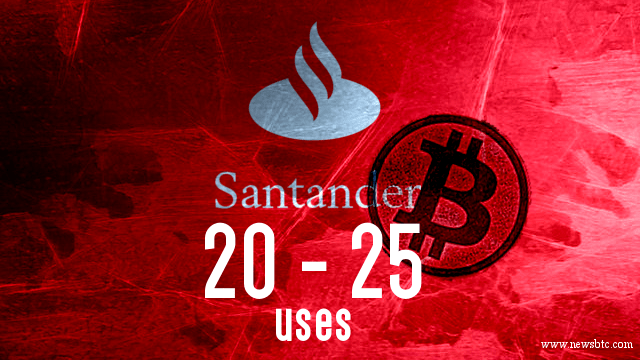 In its recently released research paper, European bank Santander claimed to have listed 20 to 25 potential uses of bitcoin. These span various areas such as international money transfers, trade finance, syndicated lending and collateral management as some of the areas where blockchain technology could be applied.

In fact, the institution has claimed that banks could save as much as $20 billion with these uses of bitcoin in their regular operations. Other banks have also been looking into the technology, with some Australian financial institutions already integrating bitcoin applications in their internal activities.

“For us, the first obvious space to explore all of this in is payments, particularly international payments. Later on we think smart contracts have the potential to transform many of the other things we do,” said Julio Fora, head of innovations at Santander. “We still haven’t made anything official, we haven’t announced anything publicly, but we have an internal team working on this. We’ve done some proof of concepts.”

This has been the main product of the bank’s InnoVentures initiative, which comprises a $100 million fintech investment fund. Insiders say that most of these funds have been channeled into blockchain-related ventures that explore the various practical uses of bitcoin.

“We’re very excited about distributed ledgers and blockchain technology. They really have the potential to disrupt many of the basic processes we have underlying our transactional products,” said Mariano Belinkey, head of Santander InnoVentures. “What we see as the foundation use case, which is international payments, we don’t really need a coalition of 50 banks to make it work. We have ten major geographies. Just us connecting our ten major geographies will allow 100 million customers to make instant payments worldwide. If we partner with two or three banks similar to us we’ve got pretty much global coverage.”

Tags: bitcoin applicationsbitcoin usesblockchain applicationsblockchain technologyNews
TweetShare
BitStarz Player Lands $2,459,124 Record Win! Could you be next big winner? Win up to $1,000,000 in One Spin at CryptoSlots