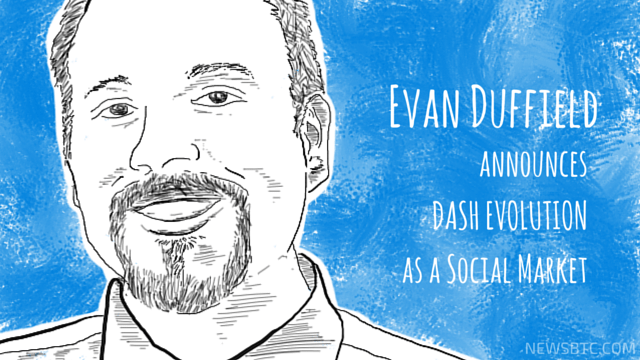 During an interview with DisrupTek.info at LaBitconf 2015, Evan Duffield got into depth about the future of DASH development, aimed to bring “Paypal-like” functionality to the digital currency with notable advancements in ease of use.

Below are some off the highlighted features announced and a general idea of how they work.

One of the main features of DASH Evolution is its decentralized API. According to Duffield, this is a “mobile interface where you can talk to the network [in a way] that acts like a centralized API, except it is not.”

The API is only accessible and executable by DASH Masternodes—these are collateralized nodes that must lock in 1000 DASH to function, and have the authority to use and profit from the tier 2 DASH services. This effectively brings a proof-of-stake security structure to DASH on top of its x11 proof-of-work. It is also arguably Sybil-proof, given the high cost of owning a large enough amount of Masternodes.

When explaining how the security model of this API works, he said:

“When you do a decentralized API request, it gets executed in 7 [Masternodes] at the same time, and these are deterministically picked by the proof-of-work hash, so you can’t fake that portion. . . They all get the same result and sign it with their private keys, and they return the same results. So you know it wasn’t tampered with.”

Another notable feature announced is that of DASH identities. These are meta data that can be chosen by users, such as any username as well as an email address. These, Duffield explains, allow users to share public keys in an end-to-end encrypted fashion without having to deal with public keys. Lists of public keys are shared in the background, making it much easier for users and bringing them DASH’s privacy by default.

He explains that users can be searched by username or email if they want to be publicly searchable, adding that “I think it will make it so easy to use that we’ll actually get some normal people that don’t have any experience with crypto, and I think that is kind of the point.”

This metadata is stored on a decentralized, encrypted and shared data storage network on top of the Masternodes—unlike prominent cryptocurrencies like Bitshares or NXT, which store the identities on the blockchain directly—which brings us to the next feature.

This, he agrees, builds the infrastructure to turn DASH into a the latest silicon valley buzz word, a “social market.”

When it comes to decentralized storage, DASH is hardly the only team in the space. Major contenders like Storj, Maidsafe and Scia have been working on this problem for months, if not years. When asked if DASH was entering the decentralized storage market, Duffield responded:

“I would say no; the idea here is to store people’s metadata, which they can store in an encrypted way on our network.”

He added that DASH already has enough on their plate, and the development of these technologies will take over a year to reach production level. However, he expects “others to fork DASH” to enter the market.

When it comes to the ETA of DASH Evolution, Duffield explained that a proof of concept should be ready about two months from now, with production quality software out a year to a year and a half from now, adding “it is a massive project.”

Check out the full interview for details and answers to other questions, like Duffield’s thoughts on the Bitcoin scalability debate, the state of Bitcoin privacy compared to DASH, whether DASH could be implemented on a Bitcoin sidechain and more.

Disclaimer: The writer is Juan S. Galt, the CEO of DisrupTek.info, in media partnership with NewsBTC