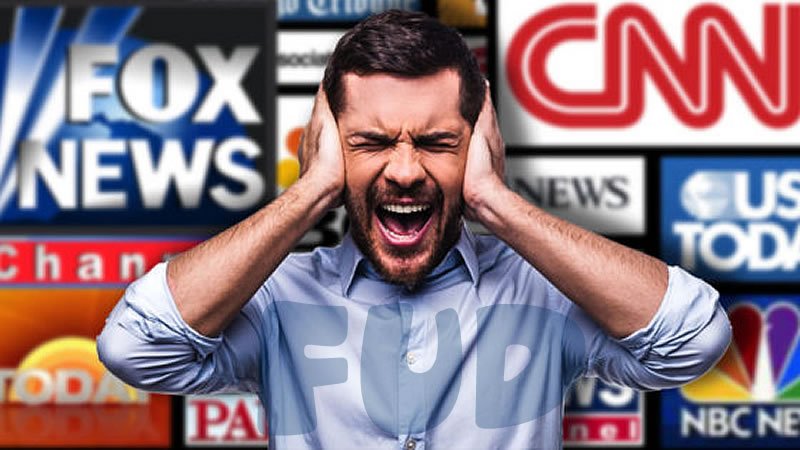 It only took a day for the Bitcoin bashers to emerge from their caves and start spreading fear, uncertainty and doubt again. After four months of inactivity crypto markets came alive again this week and headed upwards to reach new 2019 highs. This was enough it seems for the mainstream media dogs to start spewing their vitriol on crypto assets once again.

When markets are on the floor and very little is going on, mainstream media tends to stay quiet. The fact that the ridiculous headlines are emerging again means that they’re paying attention at least and crypto is back in people’s minds. CNBC, which has been previously noted for its completely inaccurate predictions on market movements, was back with a headline claiming that cryptocurrencies will all collapse because one fund manager thinks so. According to Peter Mallouk, president of wealth management firm Creative Planning;

“What we’re going to see, most likely, is, we’re going to see cryptocurrencies collapse … there’s no way that even a fraction of them can survive,” before adding that buying crypto “you get no income. It’s not a real investment. It’s speculation.”

What he fails to acknowledge is that all investments are speculative; when you buy you are speculating that the price will be higher when you sell, whether it be a property, stock, or commodity. Crypto is no different and Bitcoin, until it is used daily for its intended purpose as decentralized money, will remain speculative. Those of a similar ilk such as CNBC’s Jim Cramer called Bitcoin monopoly money back in 2017.

As NewsBTC’s Joseph Young pointed out, the scene has been reminiscent of the headlines spouted during the 2017 bull run.

Even the headlines are back to 2017 crypto bull market https://t.co/uvszVudQli

Fake Money, Fraud, Scam … Heard it All Before

Entertainment website Gizmodo went one better with a vitriolic rant the moment after Bitcoin broke resistance;

“To be clear, Bitcoin is absolutely worthless by any real measure. It’s fake money that’s about as practical to use in the real world as Monopoly bills … Bitcoin is little more than a speculator’s death cult at this point.”

The FUD did not stop there, even Bloomberg, which has been fairly balanced when it comes to the industry, jumped on the bandwagon of loathing as FUD headlines get traffic. Mocking the euphoria that many in the crypto world have been expressing recently, the article said “But have no fear of missing out: Whatever the explanation, there’s no good reason to turn bullish on crypto.”

It added that there has been no good news for crypto lately and most of it has been bad, highlighting the recent exchange hacks. One wonders if Bloomberg would take the same stance on fiat currencies when major banks get caught laundering money.

The piece added that Bitcoin was a tiny market compared to forex with trading volumes of $5 trillion per day. Very true, so this alone should serve as a testament to the potential of digital currencies which the mainstream media still appears to be very afraid of.

Tags: bitcoinbloombergbtccnbcFUDmainstreammediamsm
Tweet123Share246ShareSend
Win up to $1,000,000 in One Spin at CryptoSlots