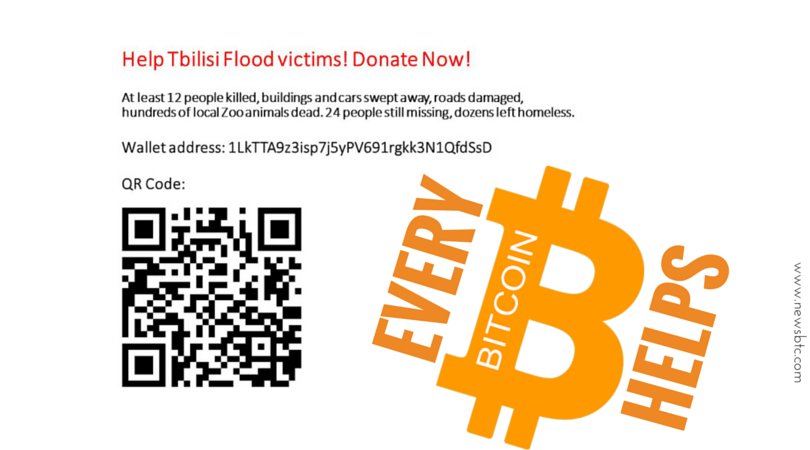 An intense downpour along with high winds on Sunday gave birth to a sweeping torrent that killed at least 12 people, tore up roads, destroyed houses, threw vehicles into the mangled trees, and left dozens homeless. There is still no count of how many local zoo animals survived the nature’s fury.

CEO of BitFury Group, Mr. Valery Vavilov said: “Our deepest condolences go to the families of those who suffered as a result of devastating flooding in Tbilisi, on June 13-14. On behalf of BitFury, we would like to donate Bitcoins to support the victims and also enable everyone willing to help from all over the world to make donations. In partnership with Georgian Co-Investment Fund, we opened a joint Bitcoin wallet where Bitcoin donations are now accepted.”

Interested donors can donate their Bitcoin at wallet address: 1LkTTA9z3isp7j5yPV691rgkk3N1QfdSsD

The QR code given in the image above can also be scanned to transfer Bitcoins.

The Chief Executive Officer of Georgian Co-Investment Fund, Mr. George Bachiashvili commented that: “In these moments of deep sorrow, our thoughts are with those affected by disastrous flooding in Tbilisi. Georgian Co-Investment Fund together with BitFury Group will raise money in Bitcoins, giving an opportunity for the Bitcoin community to support flood victims. We hope that our joint fundraising campaign will provide some disaster relief to the survivors.”

The Bitcoin community had earlier pitched in for the Nepal earthquake victims. The 7.9 magnitude calamity killed more than 10,000 people and left the nation reeling under intense sorrow, pain, and a severe financial loss. The Bitcoin community has another opportunity to make wonderful use of their Bitcoin by helping the devastated, dislocated citizens rebuild their lives. Donate your Bitcoin for a great cause!