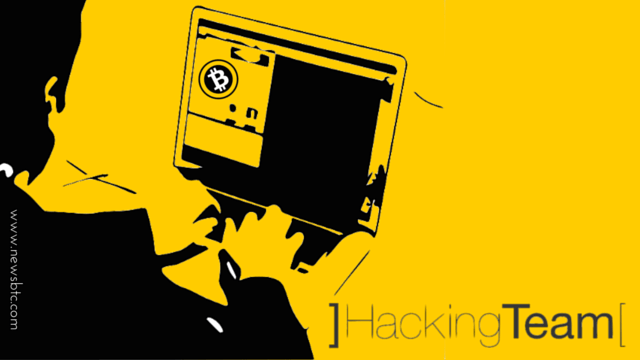 According to a news report from eWEEK, the recently hacked Hacking Team specifically targeted Bitcoin and other cryptocurrencies to allow government officials and law-enforcement agencies to follow the money trail.

Milan-based Hacking Team provides intrusion and surveillance software to governments and law enforcement agencies around the world. In early July, the group was publically dismantled as around 400GB of stolen internal company documents were distributed online.

According to an email message that was posted on Wikileaks, Daniele Milan, Operations Manager of the Hacking Team said,

“Cryptocurrencies are a way to make untraceable transactions, and we all know that criminals love to easily launder, move, and invest black money. LEAs, by using our Intelligence module combined with this new capability, can correlate the usage of cryptocurrencies, defeating the financial opacity they provide.”

The remote-access and surveillance platform particularly focused on tracking the use of Bitcoin, Litecoin, Feathercoin and Namecoin using its newly developed functionality called the Remote Control System Galileo. With this software, the company hacked the users’ wallets, waited for the passwords to be entered, and gained complete access to their details (transaction history and contact information), depriving them of the anonymity feature that the cryptocurrencies are known for.

The software is invisible to the user, evades antivirus and firewalls, and tracks all the transactions and information without draining the device battery. It hacks into the device with the most advanced infection vectors available.

Bitcoin and other cryptocurrencies have been rumored to be involved in illegal operations and the law agencies have been pressing hard to clamp down on their use. Andrew Conway, a research analyst with messaging security firm Cloudmark, told eWEEK,

“Drug purchases, illegal goods purchases, unlicensed gambling, and one that we see all the time, ransomware, is facilitated by Bitcoin. Obviously, if you are in law enforcement, you are interested in these transactions, because Bitcoin is an annoyance and will end up being more than an annoyance.”

Tags: bitcoincryptocurrenciesData BreachFeathercoinHackedhacking teamLaw enforcementLitecoinnamecoinprivacy
Tweet123Share196ShareSend
BitStarz Player Lands $2,459,124 Record Win! Could you be next big winner? Win up to $1,000,000 in One Spin at CryptoSlots