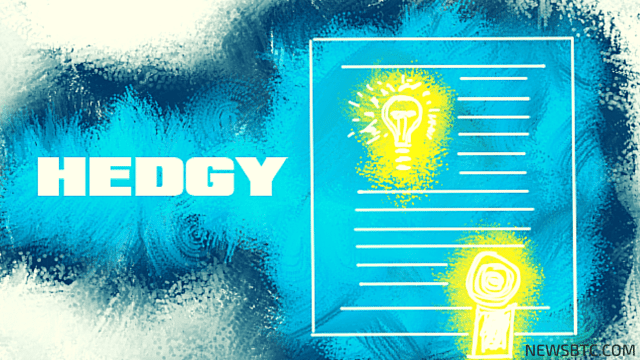 A forward contract, which is also known to be the backbone of derivatives, is a type of a derivative instrument which acts as a bilateral agreement between two counterparties looking to buy or sell an asset or commodity for a fixed price at a specified date in the future.

For centuries, businesses have utilized forward contracts to protect their assets and commercial interests against financial risk, such as currency volatility. However, such contract is often manipulated and left unsettled, due to one party’s failure to meet the contractual obligation and deadline of the payment stated in the contract.

Hedgy aims to offer a “less toxic OTC trading experience” by introducing the blockchain technology to the traditional over-the-counter financial market to allow the deployment of irrefutable, irreversible and unalterable smart contracts to authenticate and verify the contractual obligations between two parties involved in a forward contract.

“The genesis of our thesis was simple. If we could utilize Bitcoin’s P2P network combined with the blockchain, then maybe we could create a safer OTC forward contract, which would lead to a more open, accountable and distributed financial world,” the Hedgy team wrote in its newly published report.

Hedgy software implements the multi-sig technology, a relatively new feature of the Bitcoin protocol to prevent funds from being released to other outlets without the approval of three parties – two individuals or organizations involved in the contract and a single independent trusted third party called an oracle.

“An oracle can be a single independent trusted third-party (TTP) or a collection of distributed entities, which programmatically sign claims about the state of the world using information sourced through external data feeds. Oracles then combine that information with contract code for execution,” explained the Hedgy team.

Using the principles of the International Swaps and Derivatives Association (ISDA), Hedgy’s team has also created a cryptographically signed and immutable smart contract template which imitates the function of the Master Agreement, to allow commercial traders worldwide to enforce and settle OTC forward contracts on the blockchain.