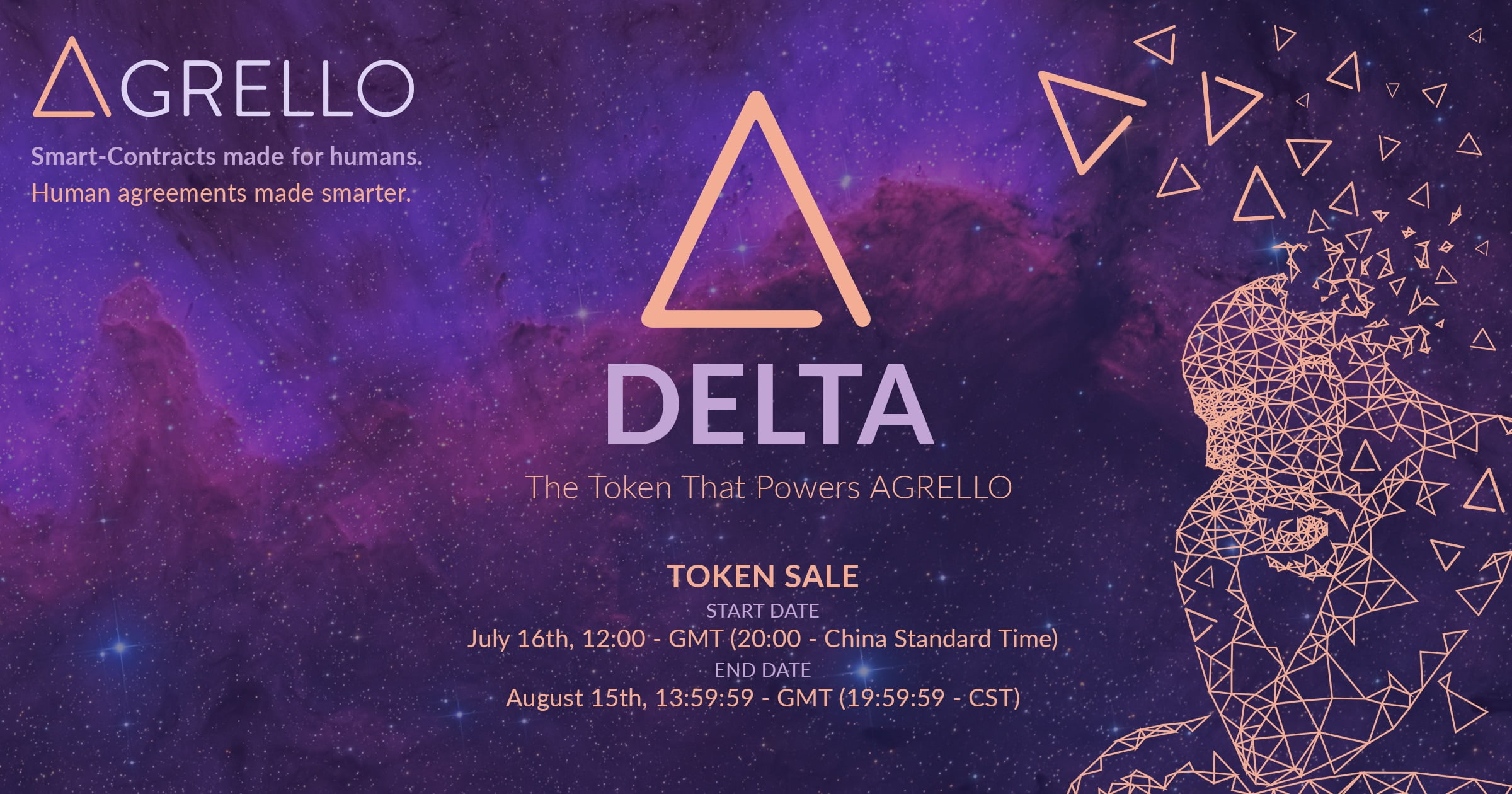 Agrello, a blockchain startup developing “smart agreements”, announced a token sale for July 16 to fund its “Self-Aware Contracts”. Based on blockchain technology, Agrello’s mission is to allow those  “without coding or legal skills to form legally-binding agreements on the blockchain”.

The Estonia-based startup developed a graphical interface enabling individuals to assemble their own contracts based on the system’s offered templates. The Agrello system turns these contracts into code and AI agents then manage and execute the contracts for the users.

Agrello’s smart agreement solution entails a smart contract management system wherein both sides of an agreement are represented by autonomous intelligent agents, which execute the party’s obligation and notify them of any tasks that need humans.

Agrello describes in its paper how it used intelligent agents based on belief-desire-intention software models (BDIs), which are used to program intelligent agents by implementing beliefs, desires and intentions in an agent. Agrello’s intelligent agents operate “off-chain”, so they are not hardcoded onto any blockchain. Instead, they run client side. The Ethereum blockchain makes AI agent’s operations immutable, and also facilitate payments and fulfill obligations on the basis of blockchain smart contracts.

The off-chain AI management system, paired with smart contracts, enable the creation of formal and complex agreements that enable users to update contracts terms in the case that contract terms change or are renegotiated. Agrello’s AI system enables the smart contracts that empower users.

“Agrello Smart agreements are assembled on the basis of a declarative high-level contract language, which we have developed for this purpose,” Professor Alex Norta, Agrello’s Chief Scientist stated. “Agrello’s contracting language treats the parties obligations and rights as its basic building blocks, which allows us to digitize contracts and treat them as executable programs.”

Agrello’s smart agreement solution, designed to be compatible with standard legal procedures so that they are legally binding, will interface with multiple blockchain-coding platforms, including Metaverse, AntShares, Lisk, Qtum, RSK, Ethereum Classic and NEM.

Agrello’s trying to solve the problem of inefficiency in the world of contracts, which the company calls “restrictively slow.”  The startup calls its self-aware contracts legally enforceable, machine readable and supportable by blockchain technology.

“The traditional understanding of a conventional contract (CC) is an exchange of commitments by identied parties that are enforceable by law,” states the white paper. “An important prerequisite for a contract that most commonly exists as a written document as evidence, is that the parties involved voluntarily engage to establish a consensus.In most business cases, CCs are documents that identify the contracting parties uniquely and state explicitly the commitments of the latter. When those commitments are performed, their status changes over time.”

The white paper adds: “Another problem with the traditional form of setting up and managing CCs is that they are often underspecied and the ability to manually track their status is restricted.”

Agrello’s “cross-organizational blockchain-agnostic framework for peer-to-peer collaboration” is made possible due to the “emergence of cyber-physical systems,” such as the Internet of Things.

The token sale follows on the heels of many startups taking a similar route. Hundreds of millions has been raised by a wide array of technology companies working in the blockchain space. Well-known blockchain investors like Erik Voorhees and South African entrepreneur Vinny Lingham have even launched their own token sales.

Tags: Agrelloblockchain technologycrowdsaleNewssmart agreements
TweetShare
BitStarz Player Lands $2,459,124 Record Win! Could you be next big winner? Win up to $1,000,000 in One Spin at CryptoSlots