In the top 10, Litecoin is one of the top performers, surging 16.5 percent at the time of writing. Even so, we expect more gains in days ahead of August halving.

After a brutal 2018, Litecoin prices are once again, rallying. It’s pure bliss for traders as well as investors who had to persevere the biting “crypto winter.” At the time of writing, Litecoin is trading at $117, leaping more than four folds five months after sinking to $22.

Behind this resurgence are supportive technical and fundamental factors. That’s apart from the direct correlation LTC has with Bitcoin, expanding as BTC close higher. However, and from dominant topics, the optimism has to do with August 19th, 2019 halving where supply-demand dynamics will kick in fairly valuing the asset.

Then, as hard-coded in the Litecoin source code, miner rewards will be slashed from 25 LTC to 12.5 LTC. Therefore, if what investors are expecting is true, then the resulting squeeze could renew interest in the medium of exchange coin, lifting prices towards $150 and even $200.

It is perhaps this anticipation that LTC is vibrant as buyers flock, thrusting prices above the psychological $100 mark. 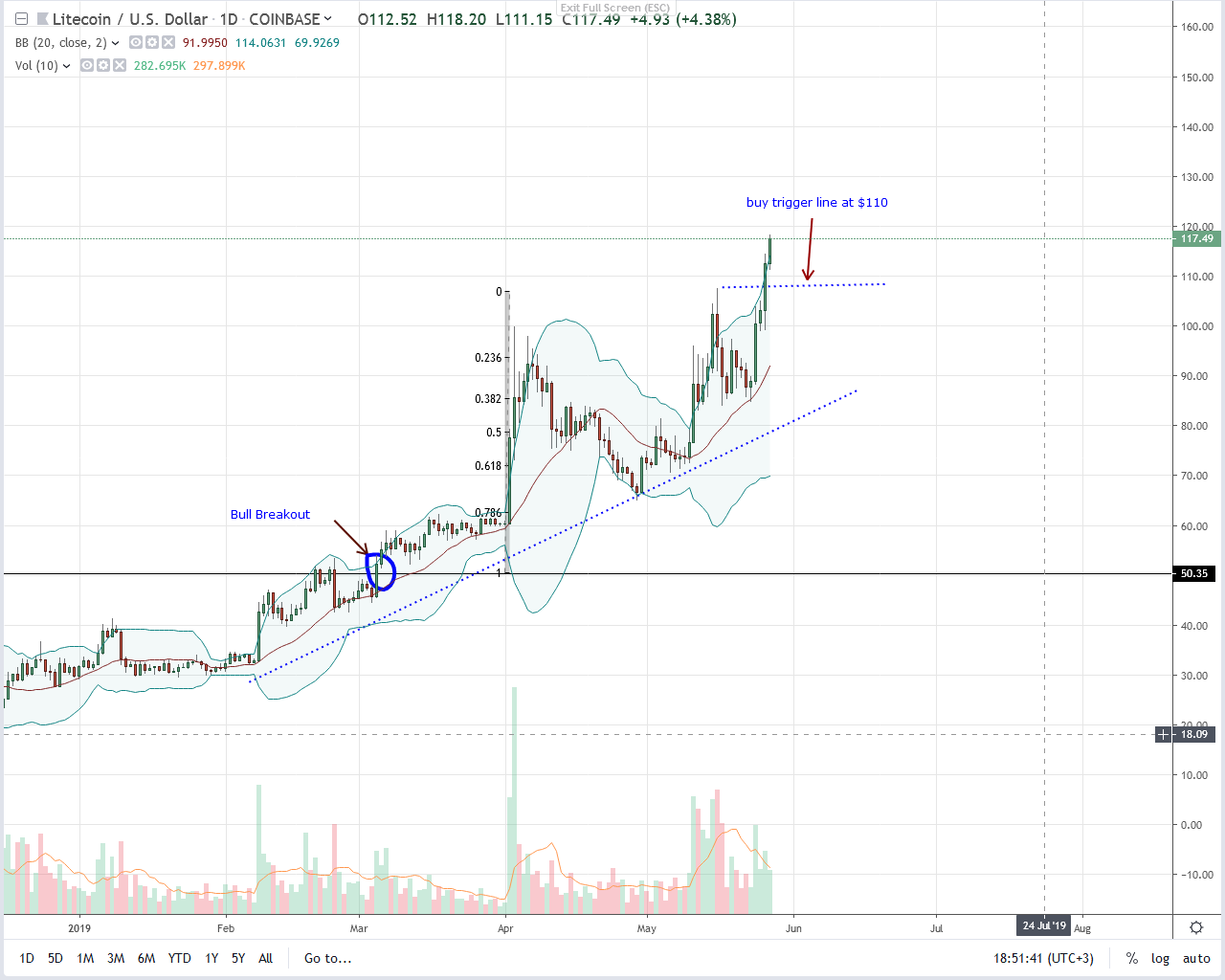 At the time of press, LTC is up 16.5 and 23 percent in the last day and week respectively. If anything, this is impressive. At the moment, the foundation of the next wave of higher highs that could see LTC spike as buyers flow ahead of halving is being laid.

Notice that from the daily chart, Litecoin is not only trading within a bullish breakout pattern after clearing $110, but after bouncing off 78.6 percent Fibonacci retracement level, it is at new 2019 highs.

Because of this, LTC prices are above Q2 2018 lows. That’s not all. Bull bars band along the upper Bollinger Band (BB) as visible in the weekly chart. That is a mark of demand. Therefore, although the breakout bar was at the back of low trading volumes, every low is a buying opportunity. The first target will be $120 and later $180 or April 2018 peaks.

In a bullish breakout, May 26th bull bar will anchor this trade plan. It is wide-ranging, and in a trend continuation phase, prices broke above $110 with above-average trading volumes of 410k versus 328k. Since bulls are in charge, it is vital that today close higher. Consequent bars should confirm underlying demand. That mean volumes should ideally be higher than 410k or even 803k of May 16th.

Tags: LitecoinLitecoin Halvingltc
TweetShare78
BitStarz Player Lands $2,459,124 Record Win! Could you be next big winner? Win up to $1,000,000 in One Spin at CryptoSlots