Six weeks to halving, LTC is up one spot to fourth as market cap exceeds $8 billion. At the time of writing, LTC is down 4.4 percent. Regardless, the announcement of a new debit card with Ternio and Bibox could support bulls.

At $8.4 billion, LTC’s market cap is around its all-time highs. As the first half of the year concludes, Litecoin is clearly one of the top performers. It is leading Bitcoin and other liquid crypto assets. But there is more. The anticipation of a scarcity shock as a result of early August halving could be the basis of another rally.

Importantly, investors accustomed to large price swings; this halving is a significant event. Scheduled every after 840,000 blocks, LTC is setting the impetus, drawing demand for BTC and other coins with similar supply slashing functions.

Because of this, the investor community is ecstatic expecting an across the board revival. Capitalizing on the positivity around the currency, the Litecoin Foundation plans to issue out a physical LTC Debit Card.

Announced on June 18, the foundation will work closely with Bibox as well as the blockchain firm, Ternio. The card, BlockCard, will open up LTC, allowing coin expenditure. 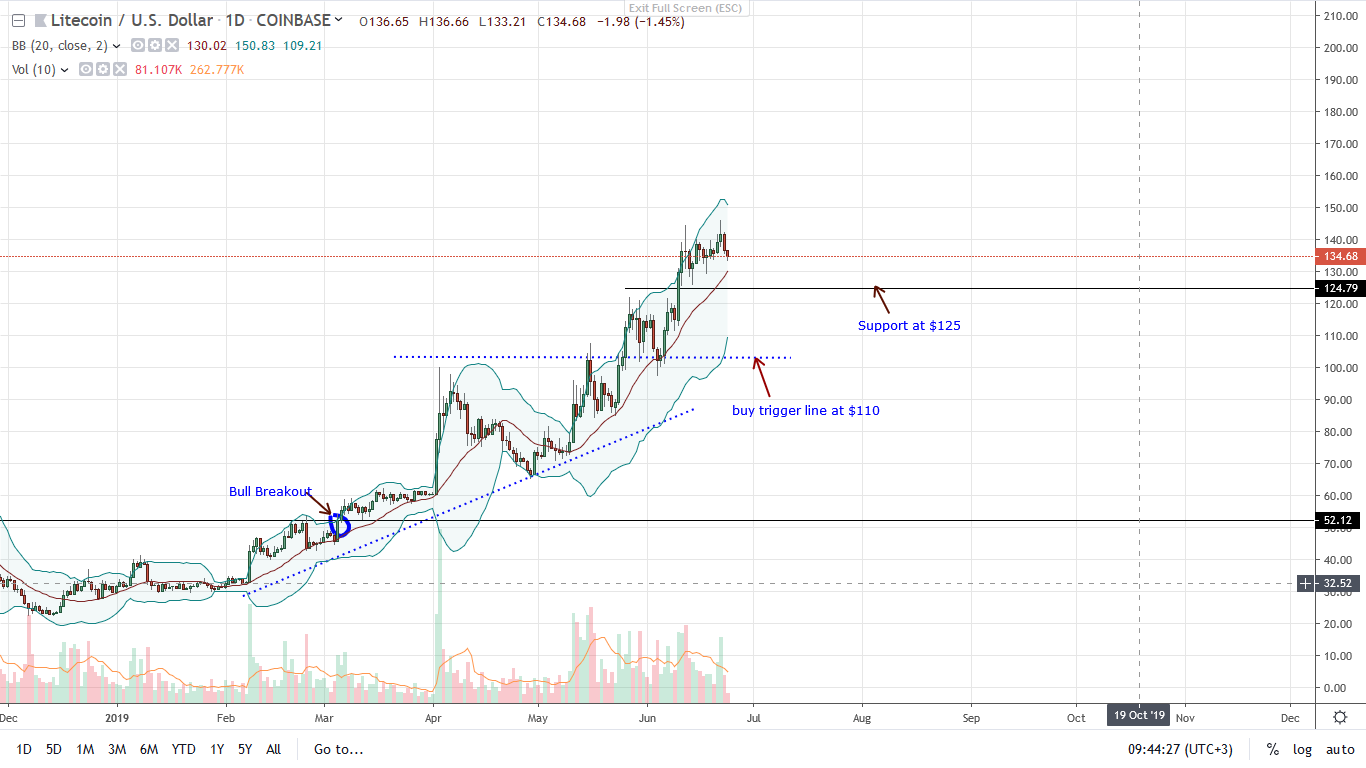 Generally, the LTC market is cooling off. Trading at $135, LTC is up two spots to fourth with a market cap of $8.4 billion but down 4.4 percent in the last day. Technically, buyers are in charge. If we factor in the hype element, then it is evident that bulls are in control and every dip is an entry point. From a top-down approach, the path of least resistance is up.

Nonetheless, there is resistance for higher highs. Relative to the upper Bollinger Bands (BB), prices are pointing lower. In a series of lower lows, immediate support is the middle BB and $125.

That is where prices could bounce back from with increasing volumes as demand flows back ahead of August. Still, if sellers press lower as LTC drop below $125, there is opportunity above $100 as long as the snap-back is with high participation. In that case, the first target will be at $150 and later $180.

Litecoin Breezes Past $64 Level As LTC Picks Up Speed