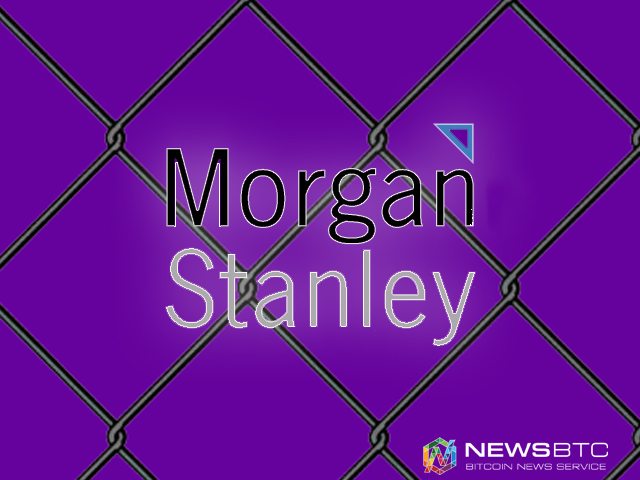 The giant corporation Morgan Stanley, a multinational financial service provider who focuses on wealth & asset management, has recently released a paper on blockchain technology. The report titled Global Insight: Blockchain in banking – disruptive threat or tool? explains the protocol will be a disruptive economic tool in the future. Despite knowing this, the firm says it will be quite some time before it affects legacy institutions.

Global Insight is directed mainly at “sophisticated investors only” and gives a detailed description of a vast array of market analysis and financial insight. This particular report concentrates on distributed ledger technology and what this means to companies like Morgan Stanley. The firm gives way to explaining the technology has promise, yet the financial management provider believes they have nothing to worry about for the time being. The blockchain industry is very young the paper details, and it has a lot to overcome before it gains mass attention. The Global Insight report reads:

“Blockchains could have widespread potential to disrupt financial intermediaries. Our in-depth study suggests several misconceptions & identifies 10 hurdles to overcome to make blockchain a reality in banking. The opportunity is clear, but the blue sky is too far off to impact our 2017/18e.”

Morgan Stanley says the it’s the early days of the distributed ledger game and the “heavyweights” in this environment are “industry-supported consortia rather than [venture capital]-sponsored startups will have the edge.” Within this realm of bank-sponsored technology creators, they mention IBM and R3 CEV. Another bold statement by the authors says blockchains with no central authority like Bitcoin will not be allowed to be as fruitful as permissioned blockchains. The paper explains:

“Not a single policymaker we met with for this note would allow an ‘unpermissioned’ distributed ledger, Nor would the banks, given concerns on [anti-money laundering and ‘know your client’ laws].”

Nevertheless, the financial titan is certain blockchain technology will transform finances. Distributed ledgers can reshape IT architecture, accessible profit pools and reduce inefficiencies in capital markets. Some key areas of finance that were also included in the report are post-trade settlement, trade finance, international payments, reference data, and even regulation of institutions themselves. Morgan Stanley highlights how blockchain data could hold information for regulators to assess giving the technology the advantage of transparency for capital and liquidity charges. A few things still hold people back from investing the paper states which include, scalability, and a universal standard.

The paper also contains a conversation with Blythe Masters CEO of Digital Asset Holdings (DAH). Masters the company expresses is running a well-known blockchain experiment she gives Morgan Stanley her insight to some of the challenges ahead. Within the discussion, Masters says to forget about Bitcoin and its “associated noise” and tells the interviewer to focus on the very basics of the underpinning technology. Masters says:

Morgan Stanley says they expect proof of concepts to bud in 2017-18, but widespread adoption will be 5-10 years from now. The report says it’s too early to pick “winners and losers or breadth of adoption” but they believe their roadmap is fairly accurate. When Masters is asked where she thinks DAH will be in 5-10 years she responds:

“Well, we will have operating products in the real world deployed by major financial services, banks, and infrastructure providers on multiple continents and we’ll be bigger than we are now.”