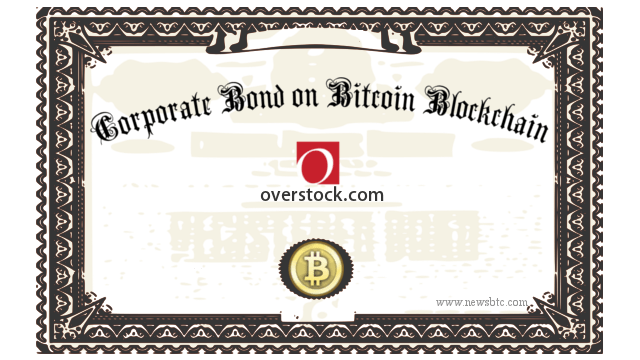 Online shopping retailer overstock.com recently announced the issue of a $25 million corporate bond on the Bitcoin’s underlying technology, the blockchain.

As indicated in its press release, the Nasdaq company plans to attract hedge funds, private equity groups and other potential investors towards purchasing the “first-ever” blockchain bond, roughly titled as cryptosecurity. With the launch, Overstock aims to settle Wall Street transactions on the same day of their inceptions. Presently, it takes a maximum of three days for securities to reach settlement, which most Wall Street people refers to as T+3.

Cryptosecurity, as explained by Overstock’s CEO Patrick Byrne, is traded on a a cryptographically-protected distributed ledger — based on their newly founded TØ.com technology — which can settle payments on the same day. Due to its distinctive approach, Byrne believes this technology to impact the capital markets in the same way internet impacted consumership.

He told Wired that Overstock is ready to issue the $25 million bond even before raising the sum, for they just want “to get it out the door.” This is probably due to the fact that other Wall Street firms are also heading towards incorporating the Bitcoin technology to their respective platforms. They include the Nasdaq OMX and Digital Assets Holdings, both of which are reportedly working on  creating their own blockchain-based systems.

Coincidentally (or not), Overstock’s announcement has also come right after Nasdaq’s very own decision to increase Bitcoin blockchain trials last month. Back then, the American stock exchange had decided to boost the aforementioned experiments in order to improve the sluggish settlement procedures of the US securities. Overstock, in its press release, has somewhat reworded the quotes by Nasdaq.

BitStarz Player Lands $2,459,124 Record Win! Could you be next big winner?
Get 110 USDT Futures Bonus for FREE!
Tags: bitcoinbitcoin technologyblockchaindistributed ledgerNASDAQNewsoverstockoverstock.comPatrick ByrneWall Street Bitcoin
Tweet123Share196ShareSend
Win up to $1,000,000 in One Spin at CryptoSlots