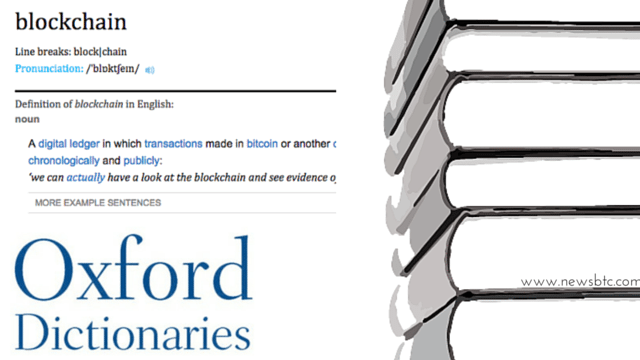 Two years after adding the term ‘bitcoin’ to its dictionaries, Oxford University Press added new definitions for related words “blockchain” and “miner”. The online language resource (oxforddictionaries.com) highlighted its latest additions in a blog post, which also featured a list that including “hangry”, “butt-dial”, “Redditor”, “rage-quit” and “bants”, among others.

OxfordDictionaries.com is distinct from the Oxford English Dictionary. The former “focuses on the current language and practical usage” while the latter is aimed at portraying “how words and meanings have changed over time”, according to its publisher.

Blockchain is defined as “a digital ledger in which transactions made in bitcoin or another cryptocurrency are recorded chronologically and publicly.” Meanwhile, the definition for a miner is “a person who obtains units of a cryptocurrency by running computer processes to solve specific mathematical problems.”

According to Katherine Connor Martin, head of US dictionaries for the Oxford University Press, the resource added definitions in relation to bitcoin mining as well. The verb “mine” also had an updated definition that is to “obtain units of (a cryptocurrency) by running a computer process to solve specific mathematical problems.”

Back in 2013, Oxford Dictionaries added the term “bitcoin” defined as “a digital currency in which transactions can be performed without the need for a central bank.” At that time, Angus Stevenson, head of dictionary projects at Oxford Dictionaries, said that their team found that bitcoin was becoming a common word and there was a lot of use of it on the internet.

Now that blockchain technology is gaining traction among several banks and financial institutions, it’s about time that its definition be added on mainstream language. Industry experts say that blockchain could be the next big technology, similar to the internet, and might be used in various practical and day-to-day applications later on.

Tags: bitcoin minerbitcoin miningblockchainNewsOtheroxford dictionary updatewhat is blockchain
TweetShare
BitStarz Player Lands $2,459,124 Record Win! Could you be next big winner? Win up to $1,000,000 in One Spin at CryptoSlots