Even With Money Tap, Ripple (XRP) Is Struggling, Slides 6.4%

Noticeably, the altcoin season is far from impressive. XRP is under pressure and liquidating encouragingly above support levels. Good news is that fundamentals are solid. Bullishly, Money Tap, which use xCurrent, replaced Resona Group with seven more Japanese banks meaning there is demand for Ripple’s solutions in South East Asia.

The buzz around the so-called “altcoin season” is dying off. Bitcoin prices are rocketing. Meanwhile, XRP and altcoins in general are struggling to register inspiring gains. In the top-5, XRP is bogged down with whipsaws quickly erasing gains. Worse still, fundamentals are mixed.

While Money Tap attracted six more Japanese banks pouring cold water of skepticism that the alliance will disintegrate with time, Bitrue lost coins in a hack.

“SBI Group announces that SEVEN additional Japanese banks (20 in the aggregate as of today) have agreed to invest in Money Tap, Co. Ltd, a brand-new company operating a domestic settlement system for digital payments that Run on Ripple.”

Bullish as it is, XRP would have the extra energy to soldier on if Money Tap used xRapid as a medium of exchange.

On the other hand, Bitrue suffered a security breach when attackers had access to the exchange’s hot wallet, making away with 9.3 million XRP coins and 2.5 million ADA coins respectively. Taking to Twitter, the exchange said:

“The hacker used what they learned from this breach to then access the Bitrue hot wallet and move 9.3 million XRP and 2.5 million ADA to different exchanges.” 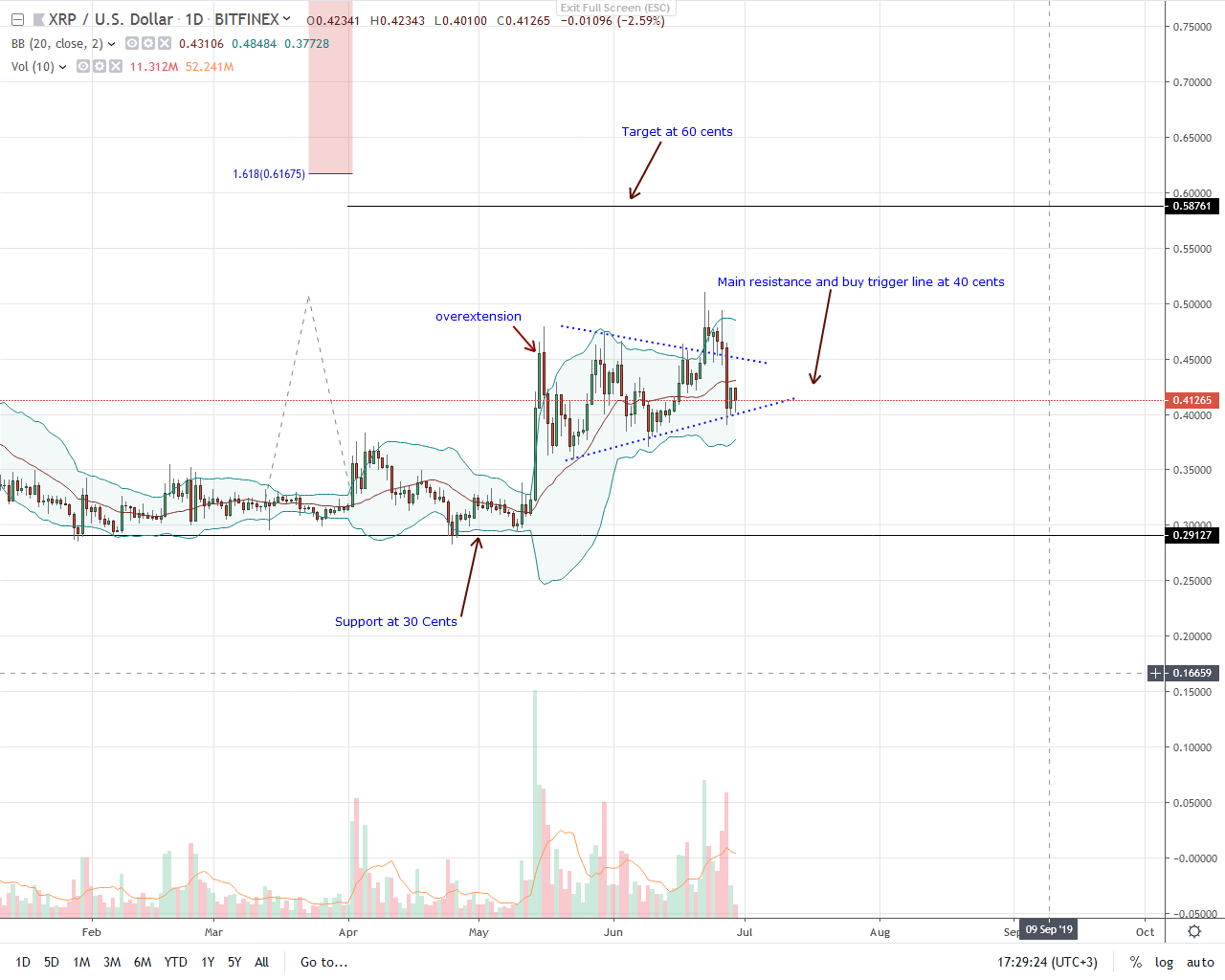 Thus far, there is the decimation of XRP bulls. Lacking the momentum to maintain further upside, XRP is consolidation above 34 cents. Overly, and in line with previous XRP/USD trade plans, that is bullish by all accounts.  Optimists may consider this a retest of support following the free fall of June 27.

However, for doubters, XRP prices may fall. All the same, bulls have a chance. While aggressive traders can buy the dips above 34 cents, it is vital for bulls to break and close above June 2019 highs at 50 cents. Accompanying this revival must be a spike in participation comprehensively reversing losses of June 27.

As aforementioned, price spikes above 50 cents ought to be with high trading volumes exceeding 113 million of June 22. Still, it would be better if that candlestick, signaling bull trend reversal, is extensive with strong support surpassing volumes of May 14 at 187 million. Only then will conservative traders initiate longs as they aim at 80 cents and later $1.40.

Tags: BitrueMoney TapRipplexrp
Tweet123Share196ShareSend
BitStarz Player Lands $2,459,124 Record Win! Could you be next big winner? Win up to $1,000,000 in One Spin at CryptoSlots