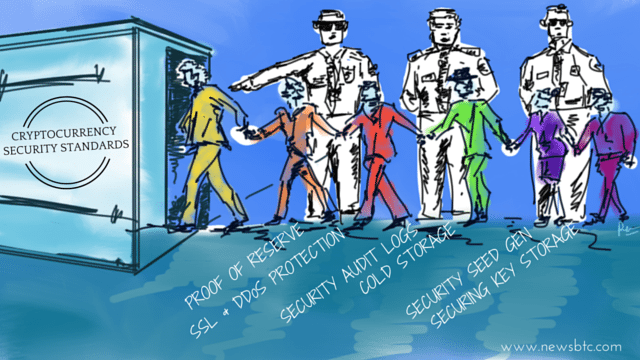 The blockchain technology is now sitting at a stage of evolution that is somehow similar to the that of the internet in the 1990s; No one can overlook the millions of dollars invested, the hefty merchant adoption and the large number of businesses inspired by bitcoin and the blockchain technology. Nevertheless, the lack of standardized security models has rendered most of today’s bitcoin exchanges & businesses vulnerable to hack attacks, especially when basic security measures are overlooked.

The aftermath of this immature and inconsistent handling of security issues has unfolded many security breaches that struck a number of major bitcoin exchanges and businesses (see part 1 of this article). Accordingly, we will look through the most sophisticated security standards that should be adopted by exchanges and other forms of bitcoin online businesses to avoid hack attacks, theft, fraud and other forms of security breaches.

Every financial institution in the world has its specialized security standards to protect its physical and digital assets including banks, brokerages, payment processors and e-commerce businesses. Unfortunately, no formal security standards have ever been formulated for bitcoin exchanges and other forms of online businesses relying on the blockchain technology.

After doing some research, I have formulated a step-by-step guide that can represent a nucleus for future cryptocurrency standards that can immunize online cryptocurrency businesses against theft and fraud.

Cryptocurrency security standards can be collectively summarized into the following points:

What are SSL Certificates?

A visitor of a website with an SSL certificate, will notice an “https” protocol on the browser’s address bar, instead of the usual “http” protocol, along with a “lock” image appearing beside the website’s favicon.

Collectively, any website accepting payments, whether in the form of Fiat, cryptos, or any other digital currency, need to implement an SSL certificate. According to the standards of the Payment Card Industry (PCI), for a website to start accepting credit card payments it has to implement an SSL certificate with an encryption key size of at least 128 bits. Similarly, exchanges and other online businesses accepting cryptocurrency payments should also go along the same path (1).

How can SSL Certificates Boost the Security of Bitcoin Exchanges?:

What are DDoS Attacks?

DDoS stands for “disturbed denial of service attack”. It is a form of “denial of service” attacks that takes place when a group of compromised systems, usually infected by a Trojan, attempt to make a server, a machine or a website unavailable to its users.

Usually, hackers code a Trojan and spread it through forums, social media, spammy emails…etc. This Trojan will send large numbers of users to the target website of a “DDoS” attack. On the other hand, sometimes users intentionally participate in DDoS attacks against high-profile companies, especially when they think that these companies exercise actions that  they believe are illegal, unfair or repressing. This took place in 2010, when big companies such as Visa, Mastercard and Paypal were hit by DDoS attacks when these companies decided to cut off their services to Wikileaks (2).

Consequences of a DDoS Attack on a Bitcoin Exchange:

The cost of outages secondary to DDoS attacks on a bitcoin exchange can be drastic, especially that not only operational costs increase, but also revenue declines as a consequence to high-impact DDoS attacks. The following represents the financial impact of a DDoS attack on a cryptocurrency exchange:

– Cessation of trading which is usually followed by a chaotic market pattern  ignited by users’ panic.

– Increased flow of tickets received by “help desk” which can increase its expenses.

– Degradation of the exchange’s reputation which stunts the overall business growth.

Although DDoS defense systems can safeguard the trading operations that take place on a cryptocurrency exchange’s trading platform, the high cost of the most available DDoS defense systems implies that one should always weigh the cost of implementation of DDoS protection services against the return on investment (ROI).

Most of the defense tactics used today are centered on mitigation and assuring the continuity services offered by the website. Blackholing is a DDoS defensive tactic that involves blocking all web traffic to the attacked website via redirecting it to a “block hole” in an attempt to save the website and its customers. Routers utilize access control lists (ACLs) to sieve “undesirable traffic”, during a DDoS attack. Although routers can shield a website against simple DDoS attacks, such as ping attacks, they can’t protect a website against most of today’s more sophisticated forms of DDoS attacks (3).

Creation of keys/seeds that are used within a cryptocurrency exchange should be an encrypted process to endorse the security of the trading platform. It is crucial to ensure that any newly generated keys cannot be phished by unintended parties. Privacy can be guaranteed when encrypted keys and seeds are only generated by the user who will use it. A Deterministic Random Bit Generator (DRBG) is a perfect algorithm to generate encrypted keys and seeds. Alternatively, a True Random Number Generator can also be used regarding that it is compliant with the current industry standards for statistical randomness.

The private keys of various cryptocurrency wallets on an exchange should be safely stored when the user is not actively using them on the trading platform. The confidentiality of private keys should be boosted via the utilization of encryption algorithms, physical locks and secret sharing whenever appropriate.

At least one backup of the generated cryptographic keys (paper, digital…etc) should be created. The backup should be protected against various environmental hazards including fire, floods and other forms natural disasters.

Audit logs provide a record of all informational changes and transactions taking place across the trading platform. Whenever a security breach is encountered, audit logs are indispensable tools that can aid investigators in diagnosing the cause and handling such incidents. This can be achieved via:

– Partial audit logs: which include records of all deposits and withdrawals taking place across the exchange’s trading platform.

– Full audit backup: all audits should be backed up regularly to a server other than that hosting the exchange (4).

Cold storage refers to the process of storing the private keys of bitcoin, or any other cruptocurrency, offline using a paper wallet, physical hard drive…etc. Although cold storage can undermine an exchange’s “proof of reserve”, it can be used in instances when users would use their exchange’s wallets for long term savings. Also, cold storage should be used during non-trading hours and server maintenance periods.

Securing a cryptocurrency exchange is a challenging task that should be continuously reviewed and assessed. Regular penetration testing should be part of the continuous assessment process of the security of any online business involving cryptocurrency. Recruitment of ethical hackers whom are enthusiastic about bitcoin can serve as a valuable tool in the inventory of a secure bitcoin exchange.

The ‪blockchain technology is by far the most innovative financial creation in the past 500 years. It is like a genetic mutation that will survive despite how hard all the world’s big “Central Banks” would try to destroy it. However, security breaches and hacking attacks represent an eminent danger that can threaten the future of the “bitcoin economy”. Internet security protocols, top notch encryption algorithms, regular penetration testing and adopting bitcoin enthusiastic, ethical hackers can help secure the world’s favorite non-decentralized digital currency.