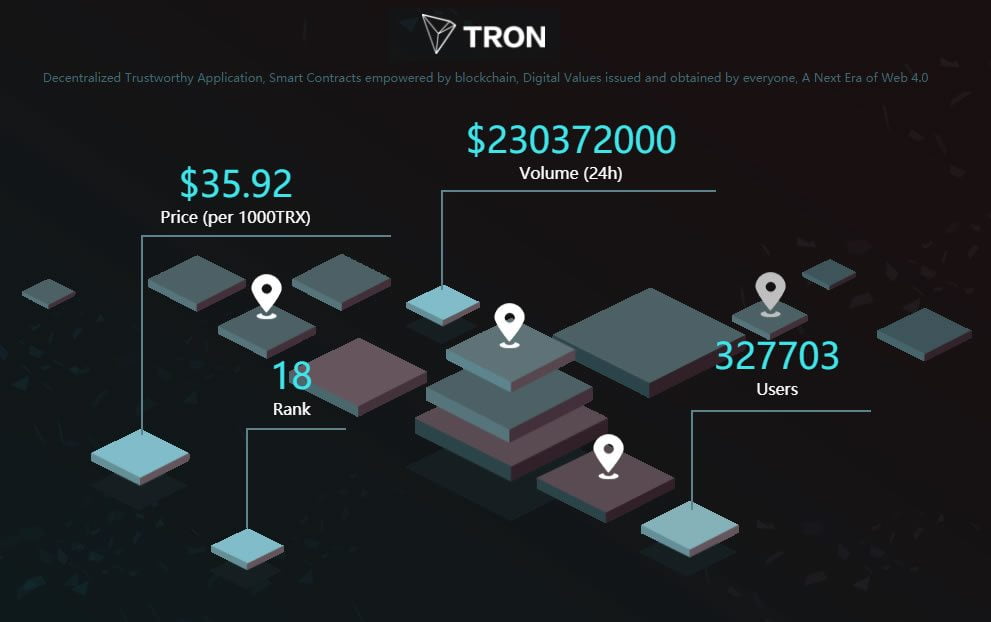 News of big partnerships are always a lift for undervalued altcoins. With Bitcoin stealing the show, and most of the capital time after time, alternative cryptocurrencies need a bigger boost. Relatively unknown Tron is about to get that as a partnership has just been announced.

According to a Medium post and the founder’s own Twitter feed rumours were flying that Tron could be partnering up with Chinese e-commerce giant Alibaba. Tron’s brainchild is Justin Sun the former Chief Representative of Ripple in Greater China and the CEO of Peiwo, the leading audio content community of China. Sun made the Forbes 30 under 30 list twice at the age of 26 and was hand-picked by Alibaba chief Jack Ma himself to study at the Jack Ma Hupan University for entrepreneurs. The two Chinese tech gurus have close ties already. 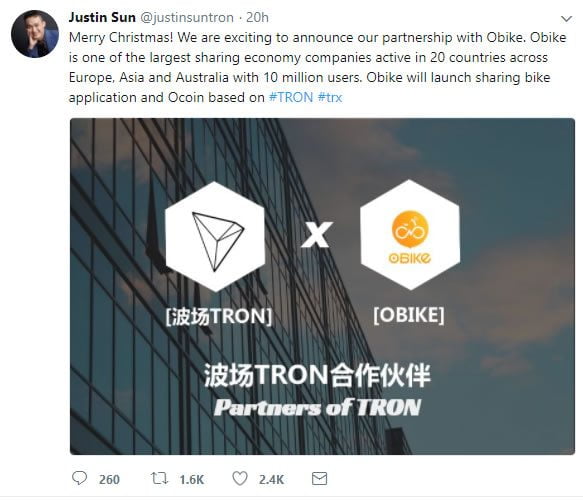 However the partnership actually announced on Twitter was with oBike, one of the largest sharing economy companies in the world. It is still an impressive announcement from the relatively new entry into the cryptocurrency market. oBike is Singapore’s first homegrown stationless bicycle-sharing system with operations in several countries in Europe and Asia and over ten million users. According to the post oBike will be launching its own Ocoin for Bluetooth bike sharing applications; this will be based on the Tron network.

“aims to construct a worldwide free content entertainment system with the blockchain and distributed storage technology. The protocol allows each user to freely publish, store and own data, and in the decentralized autonomous form, decides the distribution, subscription and push of contents and enables content creators by releasing, circulating and dealing with digital assets, thus forming a decentralized content entertainment ecosystem.”

The Tron token, TRX, has a current market capacity of $2.6 billion at the time of writing. According to CoinMarketCap.com it is ranked 18 in the list of cryptocurrencies. This month alone it has jumped from $0.002 to an all-time high of $0.067 representing an increase of over 3000%. TRX is currently trading at $0.04 after a relatively flat week.

The majority of the trade is made on Binance and Korean exchange Coinnest and it has had $318 million in volume in the past 24 hours. There are 100 billion TRX coins with 65.7 billion in circulation which makes this altcoin extremely undervalued at the present time. Should bigger partnerships such as Alibaba come in the future this cryptocurrency could go a long way.

[Disclosure: The author of this article is a Tron (TRX) holder]

Tags: AlibabaoBikeTRONTRX
TweetShare
BitStarz Player Lands $2,459,124 Record Win! Could you be next big winner? Win up to $1,000,000 in One Spin at CryptoSlots