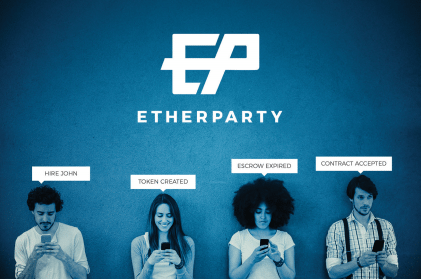 If your business isn’t already looking to blockchain technology to help streamline your company, it’s already falling behind the competition.

On October 6, Vancouver based technology company Etherparty launched its beta program for a smart contract creation tool. It allows users to create their own smart contracts on the Ethereum and Bitcoin blockchains.

The platform means that anyone can harness the power of distributed computing without fear of hacking. A blockchain is a type of distributed ledger that is comprised of digitally recorded data in packages called blocks.

These blocks of data are stored in a linear chain, which cannot be tampered with and remains unchanged. It’s ideal for companies that need to distribute sensitive documents such as contracts.

Enter the smart contact. A self-executing digital agreement that is pre-programmed, enforceable using data, and accessed through the blockchain. This groundbreaking technology allows two parties to trade and do business with each other, with no third party to verify or uphold the terms of the deal.

Etherparty launched the platform with over 500 pre-registered users and currently has smart contact templates available for beta testers. The platform is clean and easy to use, especially by those who don’t have programming experience or knowledge.

“We believe the demand for smart contracts will continue to grow as applications that automate peer interactions or facilitate coordinated group actions become more prevalent in everyday society,” reads the company whitepaper. “To meet this demand, Etherparty intends to create a platform and value-add services that allow any user to access smart contract and blockchain technology, without requiring specific technical knowledge of either.”

Etherparty removes the difficulty and offers a simple to use program that is free of potential loopholes. Helping companies save time and money, while reducing corporate risk is at the heart of the platform.

The cost of creating a smart contract can be timely and expensive, but thanks to this new technology, users can launch a variety of smart contracts in a matter of minutes, not months.

The program is still in its infancy, but it already enables users to create their own ERC20-compliant Ethereum tokens. Users can use the platform for crowdfunding and multi-party escrow agreements.

The beta program is currently free to access and the full version will be released in 2018. The platform’s in-app currency, FUEL is eligible to anyone with an Ethereum wallet that supports the ERC-20 tokens.

Etherparty promises to do for smart contracts what content management systems like WordPress did for web development. The company is well positioned to take blockchain and smart-contract technology to the next level.

Companies who choose Etherparty will not need to install other systems to run smart contracts and will always have drafts available and ready to execute from anywhere in the world. Since Etherparty works directly with the Ethereum network there is no delay for software to sync which means no execution time lost.

The best part of Etherparty is how it allows companies to integrate and upload their own documents and turn them into smart contracts instantly. There’s no need to change their current infrastructure.

Etherparty plans to be the trailblazer when it comes to providing such tools so that the next wave of users can take advantage of blockchain and smart contract technology.

The company launched the FUEL ICO at the beginning of October, which means tokens are being sold at a discounted price. And people are grabbing them up with more than $33 million raised already.

Early adopters will receive the greatest purchasing discount. The ICO is scheduled to end on Oct. 29, but with more than 50% of the goal already achieved, it’s expected to close sooner.

Once the crowd sale ends, any unsold tokens will be available to the public, and any remaining tokens will stay on the Etherparty platform, and held by the company.

Jump on board and be a part of this new movement, and get the edge on your competition.