What Is The Difference Between BTC, FOREX & Gold? 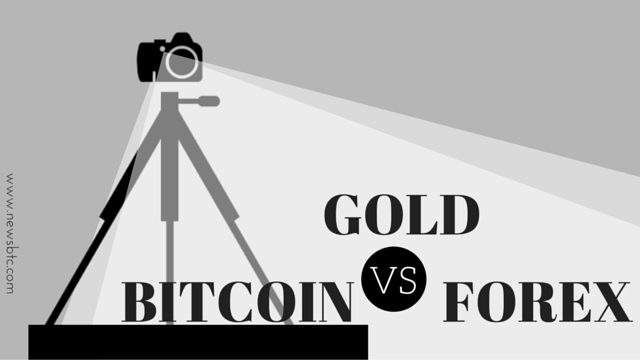 What Is The Difference Between Bitcoin, FOREX & Gold? ‘A Tripod Theory’ [Revised]

As Bitcoin and it’s counterparties known as “altcoins” enter the mainstream many investors are seeking information on the mechanics of trading these revolutionary peer-to-peer niche oriented decentralized global cryptocurrencies.

Bitcoin, forex and gold have many similar yet distinct differences that make each a unique and viable investment vehicle. Bitcoin is a “hybrid” of both forex and gold structured to trade like a stock with stop loss protections and profit objective orders which help preserve capital and ensure profits through forex like market volatility.

Bitcoin like gold is viewed by some as a viable long-term storage of wealth with many enthusiasts dubbing it “digital gold” due to the mining aspects involved that reward virtual miners Bitcoin for solving encrypted mathematical equations while keeping the underlying network (the blockchain) in sync. In theory, “Like gold as the supply becomes more and more limited the demand can increase value over time.” Bitcoin has a cap in place that will only allow 21 million coins ever to be mined giving it a controlled supply and rarity unlike the never ending printing of US Dollars.

“Because the monetary base of Bitcoins cannot be expanded, the currency would be subject to severe deflation if it becomes widely used.”

At the time of this writing exactly 14,594,075 Bitcoins were in the hands of the public leaving only 6,425,925 left for mining. Analyst’s believe the true value of Bitcoin will be recognized when the very last coin is rewarded. Chris Dixon a Silicon Valley Bitcoin enthusiast and VC thinks a single Bitcoin could be worth $100,000 USD while some have predicted $1,000,000 USD. Learn More>

NOTE: One must remember to avoid confusion that Bitcoin first is a “currency” recognized by the US Government quoted as such, “decentralized virtual currency” with all US transactions subject to taxation by the IRS. It is designed to be a “decentralized” peer-to-peer monetary network that is disruptive to the traditional “centralized” money system. Much like Uber has disrupted the taxi industry, blockchain technology has disrupted the financial sector. Initially, the US Government tried disruption of Bitcoin but the underlying algorithm is open-source making it available to anyone in the world with an internet connection who chooses adoption. So just like forex and gold who both share Bitcoins “decentralized” nature they were forced to recognize, tax, and enforce regulation initially in The State Of New York State with Ben Lawsky, NYS’s former financial regulator leading the pack.

So what truly differentiates Bitcoin from Forex and Gold?

There is no real difference between Bitcoin and forex trading. Like Forex, The price of Bitcoin is determined by supply-and-demand factors of the currency markets. With forex you can trade leveraged contracts increasing your potential of gain and risk utilizing margin trading ratios. Bitcoin can be margined, it is structured identical to stock market trading with the extreme price swings and volatility that come with currency speculation.

The Winklevoss twins have recently announced their upcoming launch of “Gemini” the NASDAQ of Bitcoin. As the demand for Bitcoin or forex increases, the underlying price rises, and when the demand decreases the price declines. Unlike forex, Bitcoin has a limited supply in circulation with new Bitcoins being created at a predictable and decreasing rate as referenced above.

The main difference between Bitcoin and forex is liquidity factors. Forex is an estimated 5 trillion market depending on who is reporting the daily turnover figures while Bitcoin is a relatively new and smaller market valued at 3 billion. Bitcoin demand must follow this level of inflation to keep the price stabilized. Bitcoin value is based off the macroeconomics of the underlying cryptocurrency eco-system while forex pairs work off the economic fundamentals of individual countries traded. Due to Bitcoins relatively small market compared to forex and existing models, the market price may go up or down in response to relatively insignificant amounts of volume creating a volatile trading atmosphere.

“Bitcoins” are a form of digital or virtual currency stored in an encrypted wallet which may be bought, held, sold or traded via peer-to-peer and/or established cryptocurrency exchange services. Bitcoin has a value which is determined by the normal supply-and-demand factors of the currency markets and represents a form of currency which is “decentralized” meaning it is outside the control of governments and central banks. The value is “directly” pegged to the US Dollar and can be converted to $USD just like $CAD, $EUR, $JPY or any other traditional fiat currency.

All alternative cryptocurrencies or “altcoins” are pegged directly to the value of Bitcoin making it the $USD of the cryptocurrency market. The underlying success of any cryptocurrency is determined by geographical and mainstream adoption combined with consumer confidence, merchant acceptance and real-world use thus creating a viable payment platform and true storage of wealth with trading market capabilities fueled by a thriving and innovative decentralized economy.

NOTE: Bitcoin is “virtual” in form and “not” a physical instrument such as gold. Bitcoin is more like forex compared to gold minus the enormous leverage provided through FX contracts. Many are confused due to cryptocurrency enthusiasts posting photos all over the internet of actual physical Bitcoins which are nothing more than pictures. Some choose to engrave their wallet addresses on gold coins or other types of precious metals merging both values into one unit.

Bitcoin wallets are controlled by two addresses: “Your public and private keys.”

I once met an early adopter of Bitcoin who had his public key (address) tattooed on his right forearm and his private key (address) on his left. So Bitcoin can basically be stored anywhere users choose. Your safest and securest bet is offline “cold storage” also known as a paper wallet which should be stored in a secure and moisture free area to avoid water damage of your keys. Offline cold storage protects your Bitcoins from online theft and hack attacks which have be duly noted in the media lately.

Public Key (Incoming Deposits & Sales) – Your public key is also known as your “address” or “addy”. This is a unique set of numbers or QR code that you show to people in order for them to send you Bitcoin payments.

Private Key (Outgoing Withdrawals & Payments) – Your private key is what shows the blockchain network that you own the Bitcoin in your wallet.

“Your private key needs to be kept safe, show it to no one!” If you lose it or someone acquires it your Bitcoins are lost with absolutely “no” recourse like losing a traditional hand purse or wallet full of $USD on the street.

Owning a Bitcoin wallet is consistant with controlling your own “personal decentralized bank” without all of the restrictions and centralized controls put in place by the forefathers of finance.

To sum things up… Bitcoin is a virtual floating exchange rate pegged to the $USD like forex with “no” underlying physical asset to base its price off and gold is a tangible currency backed by a physical commodity. Anyhow, both investments price valuations are dictated by investor confidence and overall market sentiment. In regards to Bitcoin or gold, stability should be one of the first aspects considered. While some believe Bitcoins offer the ability for a better currency, others prefer to rely on gold’s historical track record.

Bitcoins are still in their infancy and have many more years to go before investors will see a reliable track record while gold has been accepted the world over for thousands of years. This planet only has so much gold and it’s difficult to locate, mine and refine. These factors make it a rare commodity and therefore give gold its value. Modeled after the process of gold mining, Bitcoin has a controlled and limited supply with “electronic” mining capabilities. Gold has long been the smartest choice to represent “money” due to its durability, rarity and ease of divisibility. Gold is known to provide safety, security and stability against inflation and a struggling economy.

Is Bitcoin viable? Only time will tell…

COYOTE AFTER THOUGHT??? The world is in for a huge surprise!