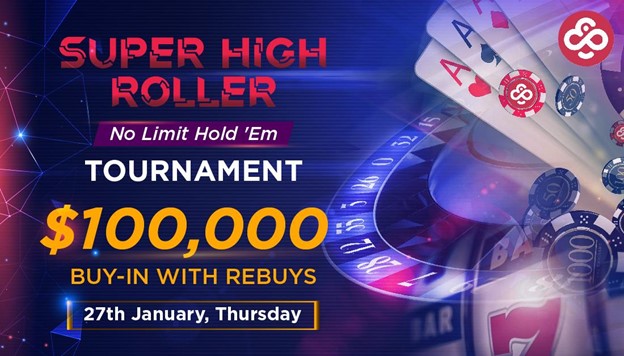 Big shout out to all the poker fans out there to get ready for one of the biggest poker tournaments of the year 2022 on CoinPoker.

The platform has announced a No-Limit Hold’Em tournament on 27th January, Thursday hosted by the all-time poker legend – Tony G (Tw: @TonyGuoga). The platform has come out all guns blazing since this new year with Multi-Table Tournaments (MTT) events and cash games and now rolling out a grand event with a $100,000 Rebuy tournament.

To take part, you need to first register on the platform

Earlier this week, Tony G and Leon Tsoukernik played a pot of a record-breaking $ 2,000,000 on the CoinPoker platform, breaking the previous record of $ 1,300,000 million in online poker.

Earlier this month, Tony G hosted a $50,000 Buy-in event which garnered a thumping response from players and viewers alike and has since created uproars in the online poker world with active users on the platform now crossing 5,000 / month and a daily addition of ~ 200 players from around the world.

Highlights of the $100K Buy-in Tournament!

Participation date and criteria for this Tournament!

What is an MTT?

MTT stands for multi-table tournament and offers players around the world to be a part and pay a buy-in fee and get a stack of chips. When those chips are gone, they are out of the tournament. But that’s not the end, in a rebuy tournament, you can buy another stack of chips if you bust all within a certain time period from the beginning.

Manifested by an ambitious team of poker lovers, CoinPoker brings a fresh, transparent and fun poker experience to players worldwide. Using the revolutionary blockchain technology, it uses USDT stable coin as the primary in-game currency and $CHP as a utility token

Players can do instant and secure transactions via $CHP, USDT, ETH, or BTC. Plus, there are no KYC checks – the privileges our players get, together with massive promotions giving away thousands in fiat value each week.

$CHP is the native currency of the CoinPoker platform. Players get exclusive benefits and support future developments delivered to our community.