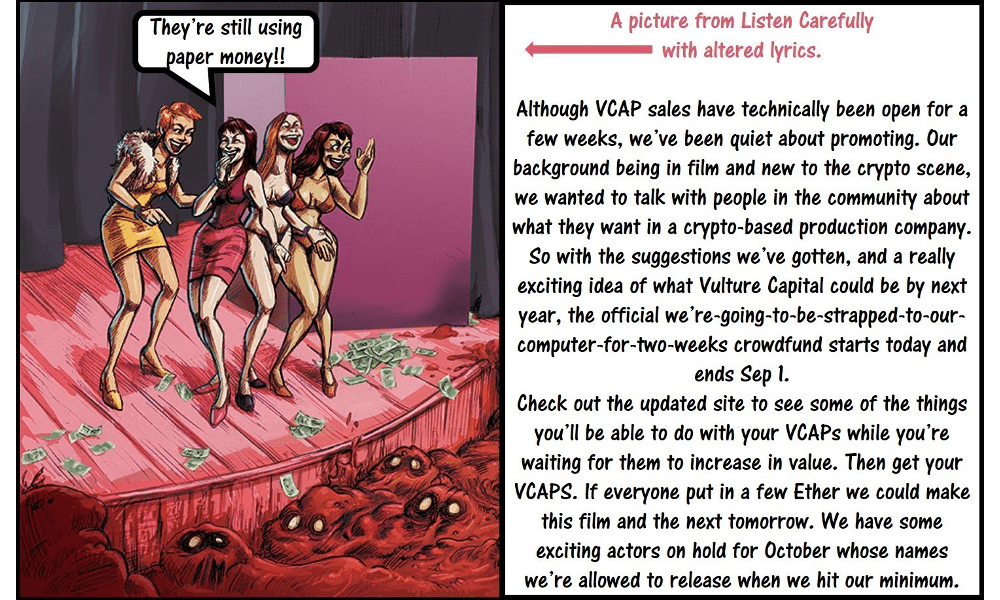 Hedley Productions is running the crowdfunding campaign to not only raise funds for the upcoming feature film titled “Listen Carefully” but to also raise awareness about the potential use of cryptocurrency among the masses. The company, through its cryptocurrency arm Vulture Capital, has been a strong proponent of distributed economy and digital currencies.

Shira Zimbeck, Writer and Artistic Director of Hedley Productions shares her excitement about the new project by saying,

“When I listen to the crypto community talk about decentralization, I feel like I’m listening to independent filmmakers. We have the same issues on a creative level. We all got into film because we grew up on John Waters and David Lynch and early Tim Burton. These guys could never get a film made now because the people funding film aren’t people, they’re huge industries that are trying to measure art with statistics. It doesn’t make sense. Bringing cryptocurrency into the film world could usher in a wave of really exciting films.”

The production company describes Listen Carefully as a smart, sinister comedy that gleefully takes on big businesses, the cult of self-improvement and government paranoia. The filming of Listen Carefully will begin in fall 2016. Its release is set for summer 2017.

Vulture Capital has set a target of raising a minimum of 45,000 ETH through the ongoing VCAP crowd sale towards funding at least a part of the project. According to Hedley Productions, they need $3.5 million to produce Listen Carefully. While speaking about the reasoning behind the budget, Benjamin Padua, President and Producer with Hedley Productions says,

“We’ve heard people say that you can’t make a film for under 5M. But actually, with horror and comedy, the most successful films have been made for just that. Garden State was made for 2.5M and grossed 35.8M, Juno was made for a bit more – 7.5M and grossed 231.4M. We’re right in the middle of those budgets, adding that we have festival credit, name actors and a ballsy as hell producer, I think we’re going to do alright.”

As the total funds raised through the crowd sale may fall short of the actual budget, Hedley Productions has plans to raise funds from other investors as well.Vulture Capital will ensure transparency at each step of the filmmaking process. Upon release of Listen Carefully, the revenue generated from the film will be used to repay VCAP token holders and other investors. Any remaining profits will then be distributed equally among producers and VCAP holders. Benjamin Padua continues saying,

“We don’t want to just make our film with crypto and run. We want to convert our company towards running completely on the blockchain with each project until we’re funding, paying and even streaming our films using ether. Plus, our token holders aren’t just funders, they’re choosing the content. Our next project is going to be greenlit by token holders. Obviously, we want the company to become big a profitable, but we want our contact with token holders to remain personal and community oriented. We’d like to make you and us studio-sized money, but without sacrificing our love of film. By being funded by the viewers themselves, we’re counting on them to keep us creative and daring,”

VCAP token holders will have a dedicated portion of the website inaccessible to the general public. In this section they can:

VCAP crowd sale is still open and interested investors can buy the tokens with either ETH, BTC, or BLK on the Vulture Capital website.

Vulture Capital is a cryptocurrency token used by Hedley Productions. The VCAP is built upon Ethereum and it is being used to raise funds for the company’s upcoming project ‘Listen Carefully’ through the ongoing crowd sale. Vulture Capital is the source of this content. Virtual currency is not legal tender, is not backed by the government, and accounts and value balances are not subject to FDIC and other consumer protections. This press release is for informational purposes only.

Tags: altcoinbitcoincryptocurrencyvcap
TweetShare
BitStarz Player Lands $2,459,124 Record Win! Could you be next big winner? Win up to $1,000,000 in One Spin at CryptoSlots