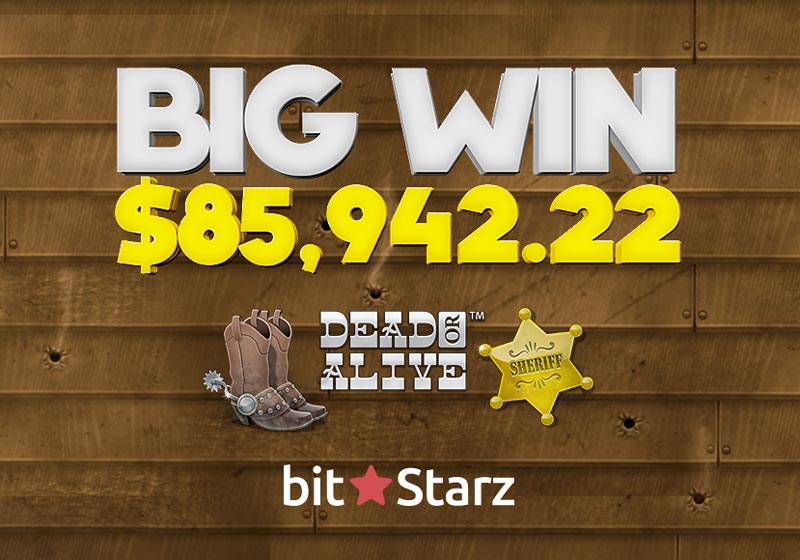 If you’re familiar with old spaghetti western movies, we’re sure you’ve heard the title “A Fistfull of Dollars” before. Well, while playing the cowboy themed slot Dead or Alive slot at BitStarz, one lucky player was able to get a little more than that as he landed a mirage like $85,942 in two separate spins, enough to even make Clint Eastwood say “Yee-haw!”.

Dead or Alive is as volatile as a raging bull, and it’s one of those typical games that will either pay quite a substantial amount of dinero, or nothing what so ever. Well, this particular player at BitStarz got to experience the first mentioned scenario as he first hit a 3,639x multiplier and then a 2,500x multiplier just an hour after.

This is not the first time this machine is paying out big at BitStarz as one lucky player hit a $21,266 payout in a single spin in the past. But don’t think for a second that it can’t pay out big twice in a short time, as again, today’s big winner managed to land two big wins in an hour!

In other words, if you want to try to hit that mega payout with a relatively small wager, this is the slot game for you. It’s time to saddle up, grab your 6-shooter, and see if your casino balance will be “Dead or Alive” when you’re done with it!

A video of the biggest of the two single wins can be found via this link: http://bit.ly/2gvvIa9

Bitstarz.io offers games of several different providers in a hybrid multi-currency environment and is one of the leading bitcoin casinos on the market, always on the front line of releasing new and exciting games. They’re also top-ranked among over a thousand casinos on the world renowned casino review site AskGamblers.

“This particular slot is a favorite among “Old Timers” in the casino, and is notorious for big wins with a low stake. Very happy to see that this player was able to win big, twice in a row, and I’m thrilled to see how far he can go!”.

BitStarz, is a well-established boutique casino and was first to offer to wager in both Bitcoin and major international currencies. BitStarz has more than 850 games in its portfolio and is most known for their lightning speed cashouts with an average payout time of 10 minutes, as well as their personal customer service agents. It holds a gaming license issued from Antillephone N.V., based in Curacao.