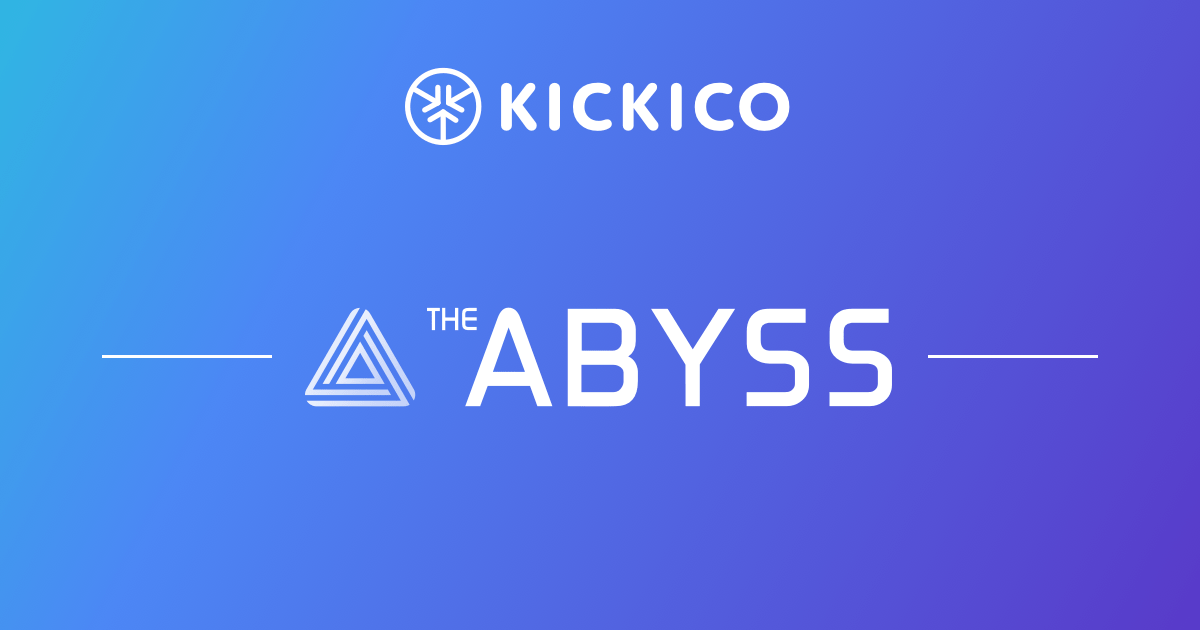 The Abyss, the next next-generation digital distribution platform, has announced that its first public offering of tokens will start on April 16, 2018, and will run until May 16, 2018. The Abyss Token Sale will be launched on the KICKICO platform and will use innovative DAICO model.

The Abyss is looking to become the world’s first project to test Vitalik Buterin’s DAICO concept. The token raise will represent an advanced and improved ICO mechanism, allowing token holders to control the fund withdrawal limit, and providing an option to vote for the refund of the remaining contributed money in case the developing team shows no progress implementing the project.

Digital distribution of games plays a significant role in the industry’s growth (over $100 billion in 2017) as it facilitates the delivery of video game content without the use of any physical media like CDs or cassettes. It is becoming increasingly common, with major publishers and retailers paying more attention to digital sales, including Steam, PlayStation Store, Amazon.com, Origin, UPlay, and others.

The Abyss, a blockchain-powered digital distribution platform, is delivering all types of video games,  from Free2play MMOs and cryptogames to AAA-titles. Unlike other platforms, The Abyss offers gamers and developers individual referral programs in which an income is paid based on a five-level referral chain comprised of friends brought in and users brought in by friends. Those who are the first to bring in users to their games, earn the maximum income.

Along with the referral system, gamers can also earn from different activities on the platform like in-game achievements, content generation (reviews, streams, guides, commentary, fan art, etc.), accomplishing developers’ tasks and other social and game activities. Developers will benefit from Internal CPA Network, allowing them to buy and sell targeted traffic to each other. The Abyss also features the auction of in-game items, Syndicates (Masternodes), and other services.

“Starting from November 2017, we’ve been thinking of designing something special, something that would separate us from other crypto projects and move The Abyss several levels up above all. The DAICO idea matched with our vision of what the ICO should be all about. It serves as contributors’ protection mechanism, while at the same moment sustains the team’s motivation. And finally, DAICO utilizes the best of blockchain’s technology features – the smart contract.” – commented Konstantin Boyko-Romanovsky, the founder of The Abyss.

To learn about The Abyss in details, please visit the project’s official website: https://www.theabyss.com/

Join KICKICO’s group and ask a question about the upcoming campaign: https://t.me/kickico

KICKICO is a blockchain platform for fundraising in cryptocurrencies, that collected more than 84 000 ETH during its ICO in September and was named “ICO of the year” by BTC CIS AWARDS. By the end of 2017, KICKICO has 55 000 people community, KICK Coin is traded on 8 exchanges, KICKICO launched more than 10 projects on its platform, that successfully completed their ICOs and raised more than 200 000 ETH of total funds. Among them: Micromoney, Hacken, Universa, Playkey, INS, Storiqa etc, our token is traded on 8 crypto exchanges. One of the main achievements is Cryptospace Moscow – one of the most global blockchain and crypto event of the year, which took place on in December 2017 and gathered more than 3000 people and 59 top blockchain and crypto experts from all over the world.