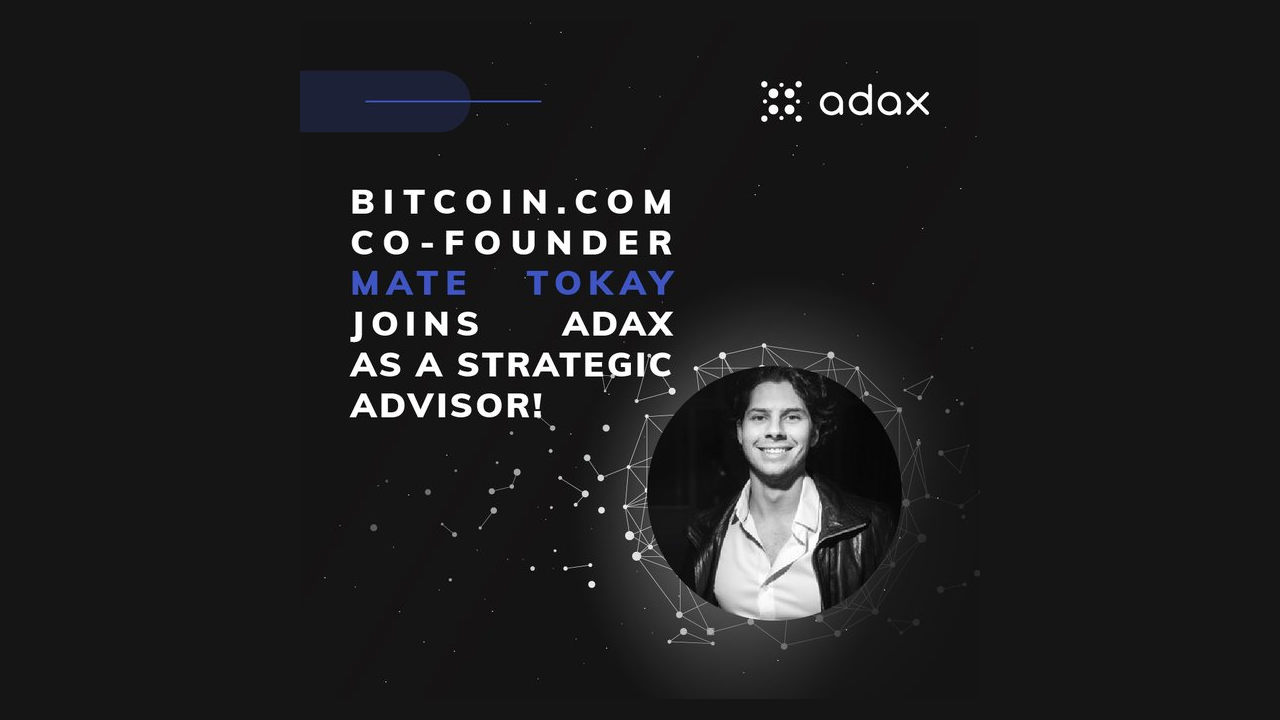 Any project must make a name for itself as it hits the consumer market. And that’s exactly why ADAX has been building their collaborations and partnerships. Most recently, ADAX added Mate Tokay, Bitcoin.com co-founder, to the roster of its partners, as both an investor and strategic advisor! The news came shortly after ADAX joined forces with Charli3, another essential participant in the ecosystem of Cardano.

In crypto and blockchain, Mate Tokay is one of the few individuals with the most considerable impact. As early as the year 2012, Mate became an early adopter of crypto through Bitcoin, and he even began mining with personalized ASIC miners in mid-2013. In addition, he established Bitcoin news and review site Bitcoinist.com to discuss advancements in this newly-formed crypto ecosystem. However, he eventually sold the site and partnered up with Roger Ver and established Bitcoin.com. His most significant objectives are to make cryptocurrencies as accessible as possible to most people and forge more and more relationships with those interested in the crypto space. Going back to Cardano, Mate has been one of its earliest supporters; he even got his first ADA bag under 0.3 cents. Up to this very day, his vision of bringing crypto to the next level remains, and he believes that ADAX has the same end goal—thus leading him to join forces with them.

By expressing his all-out support, Mate provides significant value to the project and strengthens ADAX’s standing in the industry. Furthermore, his experience with the crypto sector, user acquisition, networking, and branding will significantly enhance the platform’s reception.

Time and time again, ADAX has been a powerful advocate of providing value to the Cardano ecosystem. This project aims to facilitate and simplify decentralized swap activities and to provide liquidity for automated market makers. ADAX even collaborated with Charli3, the decentralized open-source oracle for Cardano, to broaden its reach and scope. In addition to this, Netvrk and Black Dragon, who will act as marketing, development and research partners, are also some of the company’s noteworthy collaborations.

All these drastic changes mark another significant milestone in the lifespan of the project. Coming from essentially nothing a month ago and gaining this sort of momentum has certainly not gone unnoticed. Immediately the next day after the Initial Exchange Offering finishes on the 25th, the Cardano Native Token listing of ADAX shall take place June 26th. Even if the market has been unstable, to say the least, as of late, the team still opted not to postpone the project and exhibit faith in their concept. Thus, investors who want to take part in the following biggest decentralized exchange will have their last chance to participate in the final hours of the IEO. Available on Exmarkets, the ADAX token can be purchased at $0.30. Afterwards, at the same time as the token listing, ADAX off-chain Staking will commence on June 29th. All in all, the ADAX team has done a great job in playing their cards right, and hopefully, this will carry on in the following months.

Again, since the project is currently at its early public sale stages, we must expect many more changes (i.e. more partners will be brought in, airdrops will occur, private sales will be done). So, to keep up with all this news and information, join our community.