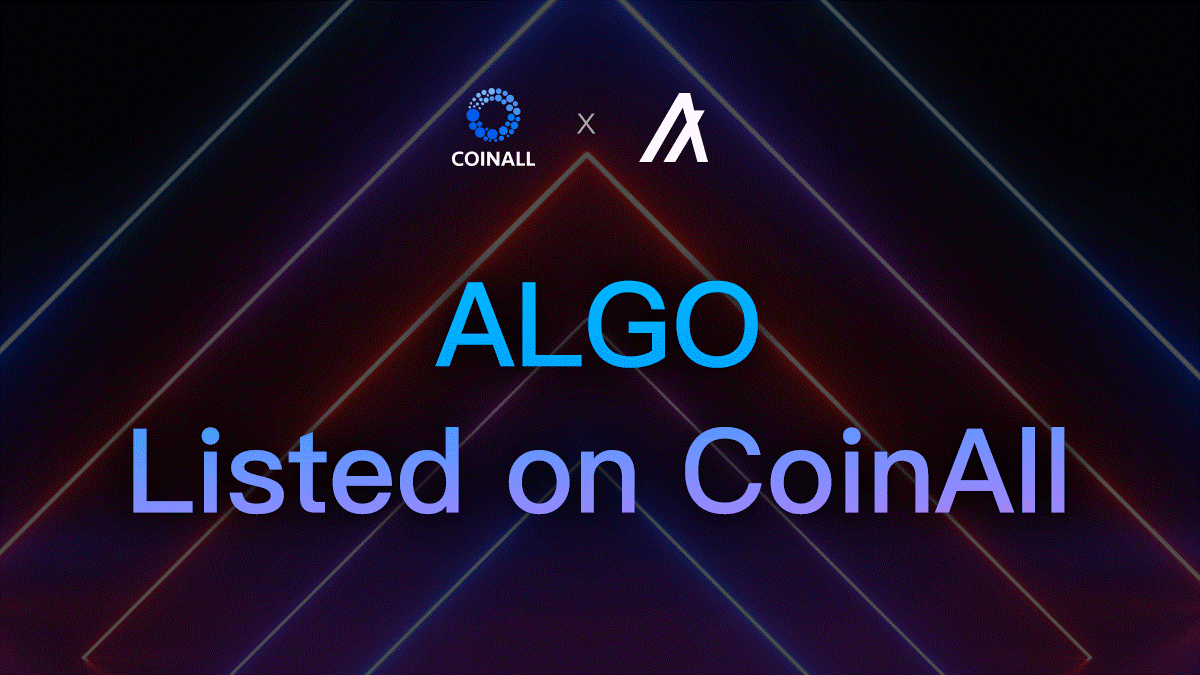 On Jun 19, well-known digital asset exchange CoinAll announced the listing of Algorand (ALGO), one of the most outstanding blockchain projects in 2019, and have opened ALGO depositing at 18:00 June 19, 2019 (CEST, UTC+2). According to the official announcement, CoinAll listed 4 trading pairs once Algorand is launched, including ALGO/BTC, ALGO/ETH, ALGO/USDT, and ALGO/USDK.

Algorand has an all-star team led by Turing Award winner, also the project founder, Silvio Micali, who is one of MIT’s renowned cryptographers and one of the co-inventors of the famous Zero-knowledge Proof. He won the Gödel Prize in 1993 (the highest honor in theoretical computer science), RSA Award in 2004 (the highest honor in cryptography) and the Turing Award in 2012 (dubbed as the Nobel Prize in computing).

With a strong academic background and cryptography foundation, the Algorand team proposed a new PurePoS (pure proof of stake) consensus mechanism, which can balance decentralization, efficiency and security and may resolve the blockchain trilemma for the first time.

In the evening of June 19, Algorand launched its mainnet, opened the first round of Dutch Auction and announced the partnership with CoinAll. CoinAll has opened ALGO deposit at 18:00 June 19.

Algorand (ALGO) is designed to eliminate the technical barriers that have been hindering mainstream blockchain development over the years. It is decentralized, large-scale and secure – the world’s first blockchain that provides real-time settlement. The Algorand system will achieve higher transaction volume comparable to that of the large payment financial networks over time.

Apart from the Turing Award-wining founder Silvio Micali, Algorand also boasts a team of world-class technology and research experts, and business leaders from tech companies worldwide. The team includes Nickolai Zeldovich, a world-class expert in system security; Chief Scientist Chen Wei, who has won the Career Award of the American Nature Foundation; Yossi Gllad, winner of the 2017 IETF/IRTF Network Research Application Award; Dr Tal Rabin, one of the 50 outstanding women in the global technology community of Forbes 2018 and member of the National Academy of Arts and Sciences; Greg Colvin, core developer of the Ethereum Virtual Machine, etc.

Algorand’s first Dutch Auction ended with USD 2.4, 25 million tokens were auctioned and raised over USD 60 million. After the first Dutch Auction, the Algorand team reserves 49% of the token to protect the ecosystem to ensure the network security. The maximum circulating supply is 25 million + 25 million * 0.49 (foundation) = 37.25 million ALGO.

According to the foundation, the total circulating supply of ALGO will reach 10 billion in the first five years of operations. Based on its sell price (USD 2.4), the total market cap of Algorand is nearly USD 24 billion, which is close to Ethereum, currently the second largest market capital (USD 28 million).

“CoinAll is committed to bringing high-quality and high-potential projects globally to facilitate in-depth partnership with the popular projects in the industry. We are happy to be the first exchange to list Algorand, and we hope to bring more quality projects like Algorand to our users,” said CoinAll representative.

CoinAll is a leading digital asset exchange and a strategic partner of OKEx, which shares OKEx’s world-leading security system, trading depth and liquidity, with over 20 million user base (OKEx users can directly login to CoinAll) and provides 24-hour worldwide customer support.