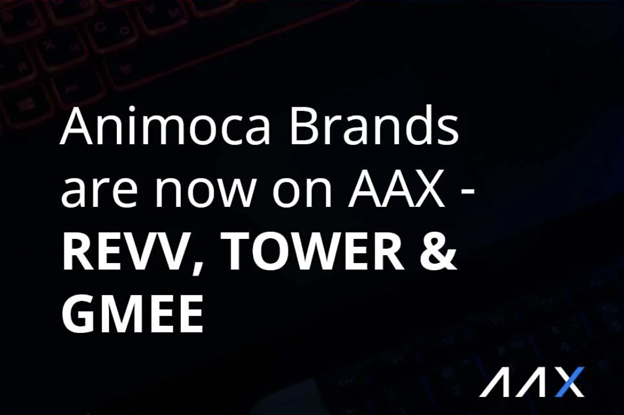 30 Dec 2021 – AAX, the institutional-grade crypto exchange, announced today it is supporting Animoca Brands to list a series of highly sought-after blockchain gaming tokens, kicking off with three coins: $REVV, $TOWER and $GMEE, as an initial step to form its GameFi ecosystem.

A global powerhouse in blockchain-based gaming, Animoca Brands is the author of hit play-to-earn titles including REVV Motorsport, REVV Racing, The Sandbox, Phantom Galaxies and Tower Experiment. This is one of AAX’s endeavors to become a major driving force pushing forward the burgeoning GameFi universe.

The three token listings on AAX:

“Animoca Brands is among the most exciting and forward-thinking brands shaping culture and practice around the idea of Web 3.0,” says Ben Caselin, AAX’s Head of Research & Strategy.

“What sets Animoca Brands apart is their proven commitment to build an environment where both established and new generations of gamers, entrepreneurs, content-creators and developers can be creative, build identity, secure ownership and participate in virtual micro-economies, with real-world applicability. We’re pleased to offer a rich and diversified exposure to their most promising projects and contribute to the development of a more sophisticated market around the emergent Metaverse.”

AAX has opened deposits and withdrawals for the $REVV, $TOWER and $GMEE. Spot trading of $GMEE/$USDT, $REVV/$USDT and $TOWER/$USDT pairs will be available at 09:00 UTC on Dec. 30.

AAX Exchange is a borderless exchange that caters to a global audience as we believe crypto is for everyone. Through an accessible range of products and by contributing to the conversation about crypto and culture, we are opening the door to Bitcoin and other digital assets for the estimated 96% of people worldwide who do not yet own them to build better and more inclusive economies.

Favored by more than two million users in over 100 countries, AAX is the first exchange to use the Satoshi Standard (SATS) to drive the adoption of Bitcoin. We are also the first to be powered by LSEG technology, and offer high-yield savings packages, 100 spot pairs, deeply liquid futures markets, regular discounts on major tokens and a range of on-ramps.