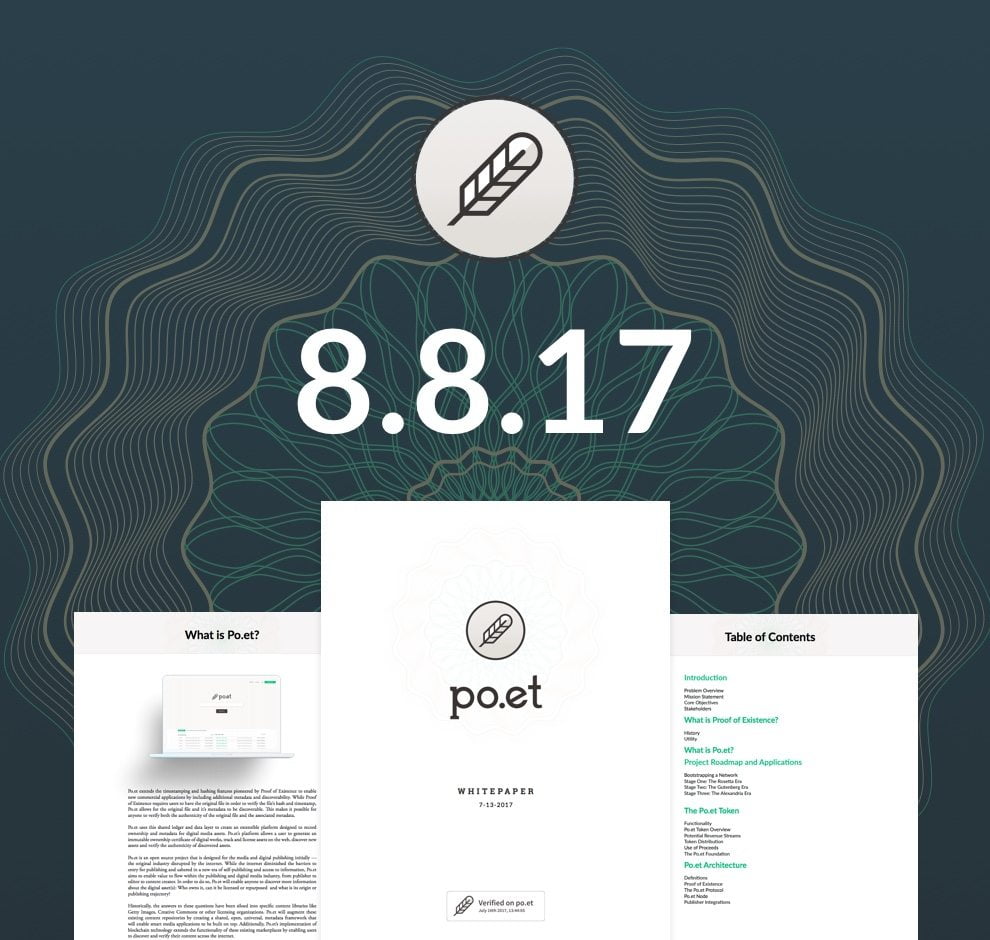 The core objectives of Po.et are to create a platform which simplifies the process for publishing, licensing and authentication of digital assets. Simplifying the publishing process necessitates solving the issues of document integrity, licensing, arbitrage, analytics, syndication and attribution of digital assets. Po.et aims to create a Bitcoin blockchain-based platform with added smart contract functionality and applications to facilitate distribution of digital creative works and remove marketplace friction for publishers, editors and content creators by solving these issues, as well as creating greater cost efficiencies in hashing metadata than previously introduced.

Po.et’s platform includes a digital media licensing marketplace and it’s core product – the immutable portfolio, an asset wallet for all creative digital assets where territory and search parameters are considered for licensing and monetization. Po.et is ultimately laying the foundation for an open, blockchain-based protocol for decentralized media applications.

The Po.et native token (POE) serves several purposes: To bootstrap the network effects of Po.et by creating a community of engaged, invested stakeholders and publishers. To raise funds for the long-term development of Po.et and to provide a mechanism to economically reward early adopters and positive contributors to the Po.et network.

“There is a foundational race right now to solve key vertical challenges for the publishing industry. Po.et is born out of a pain we felt deeply at Bitcoin Magazine and we have partnerships identified to work in tandem to create solutions through the Po.et protocol – attribution and licensing marketplaces,” said David Bailey, CEO of BTC Media.

Po.et has previously raised $1 million USD in a pre-sale of tokens from media veterans, institutional investors, and blockchain entrepreneurs. Now Po.et is aiming to raise an additional $9 million USD through the sale of the POE token, which represent a share of revenue generated from commercial activities on the Po.et network.

publishers, journalists, alpha publishing partners and others who contribute to growing the Po.et network. The Po.et Foundation will retain 22 percent of all POE tokens for long-term development, with the remaining 8 percent going to the early team and founders.

Po.et – Proof of Existence 2.0 is a Bitcoin blockchain protocol that establishes an open, universal and immutable ledger for managing the unalterable ownership, attribution and licensing of creative digital assets. Po.et builds a bridge between creators and publishers and enables the discovery of new content and verification, authenticity and authorization of generated content through a truly transparent and timestamped system of attribution. Po.et is based in Singapore and the United States, with offices in Los Angeles, CA. For more information about Po.et, please visit po.et .

For further info and the official Po.et whitepaper, visit their website at http://po.et .