Artificial Intelligence & Blockchain in Medicine Will Save People 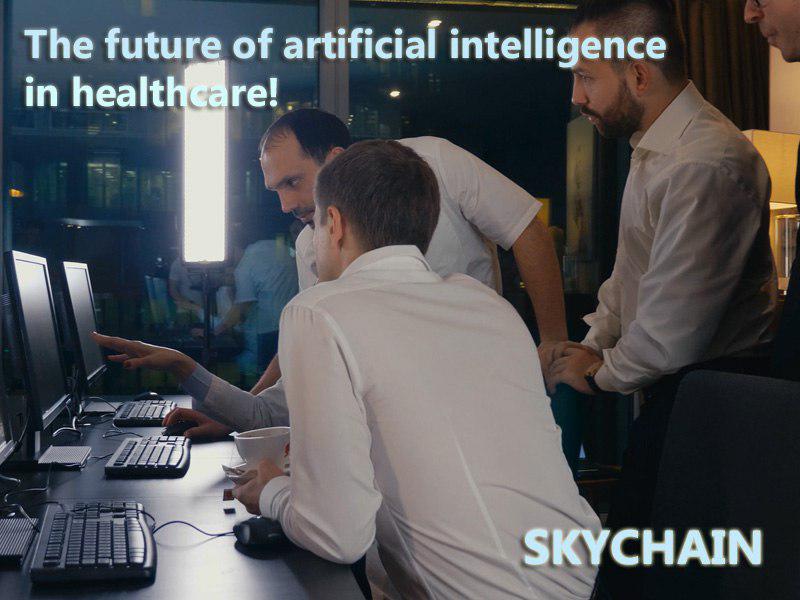 Skychain Global, for the first time in Russia, has successfully conducted a test of the artificial intelligence system for medical diagnostics, comparing the number of errors committed by the living doctors. This infrastructure blockchain project is aimed at helping doctors and patients have accurate diagnoses.

24th February 2018: Skychain Global is pleased to reveal that they have just concluded a test of their artificial intelligence system by comparing the number of errors committed by the living doctors while carrying out medical diagnostics. Interestingly, this is the first ever test of its kind to be conducted in Russia. An infrastructure blockchain project, Skychain is dedicated to providing an infrastructure to radically increase the efficiency of healthcare AI development and training.

There is no denying the fact that the field of medical sciences has experienced significant progress over the years. However, human beings are not perfect, and hence, are prone to errors. Unfortunately, just like many years ago, doctors still make mistakes in medical diagnosis. Recent statistical figures suggest that medical errors are the third most common cause of death in the US, after old age and oncology. As an example, it has been argued that doctors fail to diagnose 70% of lung cancer of the first stage on a radiograph.

Experts suggest that the groundbreaking AI technology can help detect a very high percentage of cases that even the best of human doctors fail to diagnose. Skychain Global is in the process of developing a platform on the blockbuster that promises to drastically increase the efficiency and accuracy of artificial intelligence in medicine, by securely uniting all participants in the process of building computer intelligence. The core idea of Skychain is to unite a single smart contract between the owners of big-data in the field of medicine, AI developers and consumers.

Skychain was founded by a successful businessman in the field of IT, with support from experts in the field of artificial intelligence and healthcare partners across the globe. The project team has already developed a prototype system and published its source code on GitHub. On February 20, the prototype system was tested in diagnostics. A few neural networks hosted on Skychain diagnosed melanoma, breast cancer, and heart diseases more accurately compared to the human doctors.

A short video of the event is available at https://www.youtube.com/watch?v=NeqnhaghfrI

Interestingly, the system was found to deliver wrong results for 4% to 14% of cases, compared to 18% to 32% of cases diagnosed wrongly by the doctors. Moreover, Skychain spent an average of 0.1 seconds for each diagnosis, while the doctors required around 20-30 seconds. The findings of the test clearly indicate that the advent of artificial intelligence in medicine will save the lives of millions of people every year.

The testing of the Skychain Global system was carried out under the active participation of several top-notch doctors, medical professionals, and healthcare professionals.

“Your developments are very relevant; they will be primarily useful for screening,” said Volgin Valeriy Nikolaevich, Doctor of Medical Sciences, professor, and dermatologist.

“A modern, unique project, which has no analogues in practical medicine. The project provides a preliminary assessment of the pathological process in different branches of medicine with artificial intelligence,” feels Ovsyannikova Maria Romanovna, a renowned doctor, pathologist, oncomorphologist, and forensic medical expert. “This function can be used by both patients and practitioners. The development of such technologies is necessary and inevitable in modern medicine.”

Another top-notch doctor and anaesthesiology, resuscitation, and ECG diagnostics expert Golikov Maxim Alekseevich said, “At a minimum, similar studies involving artificial intelligence are ancillary support for the doctor. The program issues a decision that can draw the doctor’s attention, and perhaps make a different decision.”

Highlighting her experience of participating in the trial, noted dermatologist Sadovskaya Maria Valeryevna said, “The competition of doctors with artificial intelligence is quite a new thing for us. For me, the assignment was not difficult, but very useful. It was nice that dermatologists responded best and at the end, I just lost 2 points to artificial intelligence.”

In its initial stage, Skychain Global is focused solely on medical diagnostics with the help of AI at the level of the doctors.  However, the accumulation of medical big-data in a single ecosystem of machine learning promises to provide unprecedented opportunities in the near future. AI can estimate the effectiveness of drugs and treatment regimens based on a billion case histories, independently discover new diseases, develop the most effective treatment regimens for a particular patient, and even, perhaps, develop new drugs and approaches. Skychain project can make this a reality by uniting all in a single ecosystem offering a huge array of medical data available for training neural networks.

Skychain is an infrastructure blockchain project aimed to host, train and use artificial neural networks (ANNs) by market participants. In its initial phase, the project will be devoted only to medicine to help doctors and patients have accurate diagnoses using this system. Each member of the ecosystem will provide his/her resources and thus create a product that is ahead of any competitor’s. In its turn, the system will reward each participant with high benefits.