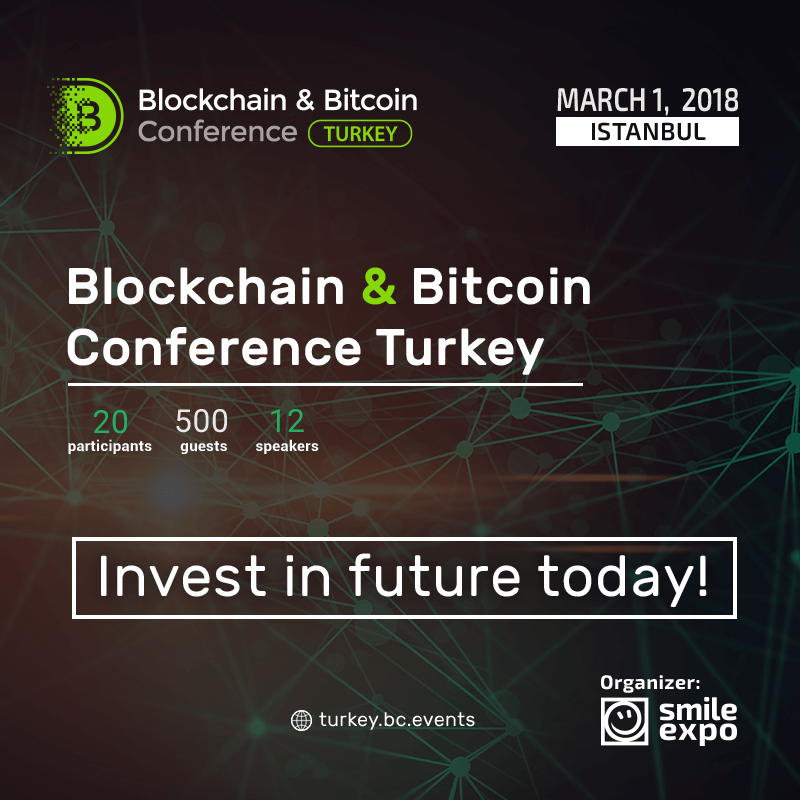 On March 1, Istanbul will host a large-scale event Blockchain & Bitcoin Conference Turkey, dedicated to the study of the role of blockchain technology and cryptocurrencies in the modern world.

Why Turkey? The country experiences an active development of the blockchain technology and cryptocurrency market. Currently, the country has successful digital assets exchanges Lira-Bitcoin and BTCTurk, and cryptocurrency payment systems Payza and Bitwala. In September, Turkey offered for sale apartments that could be purchased for bitcoins, and the main airport of Istanbul has Bitcoin ATM. According to the results of international studies, the number of Bitcoin enthusiasts in the country is growing every day.

The authorities haven’t yet developed an official position regarding the cryptocurrencies. In 2013, they announced that using digital assets is risky; however, in 2017, their narrative changed dramatically. In early November, the president of the Central Bank of Turkey (CBRT) Murat Cetinkaya said that, theoretically, with the help of cryptocurrency, it is possible to restore the country’s financial stability.

The organizer of the conference is the international company Smile-Expo, which has carried out 11 successful Blockchain & Bitcoin Conference events all over the world in 2017. These events attracted thousands of visitors, and Blockchain & Bitcoin Conference Moscow became the largest one in Russia. Now, the company enters the Turkish market, as it sees the development prospects for the cryptocurrency.

Among the speakers are representatives of the authorities, the leaders of the Turkish market in the field of blockchain and fintech, as well as the most influential people in the field of cryptocurrency.

The event will also feature an exhibition area, where companies will present their latest mining equipment, as well as innovative blockchain-based software and applications.

The official language of the conference is English.

Sale of tickets is already open. When buying tickets before January 31, 2018, you save up to 60%. More details on prices can be found on the official website of Blockchain & Bitcoin Conference Turkey: https://goo.gl/T8D9fT

Tags: Blockchain & Bitcoin Conference Turkey
TweetShare
BitStarz Player Lands $2,459,124 Record Win! Could you be next big winner? Win up to $1,000,000 in One Spin at CryptoSlots