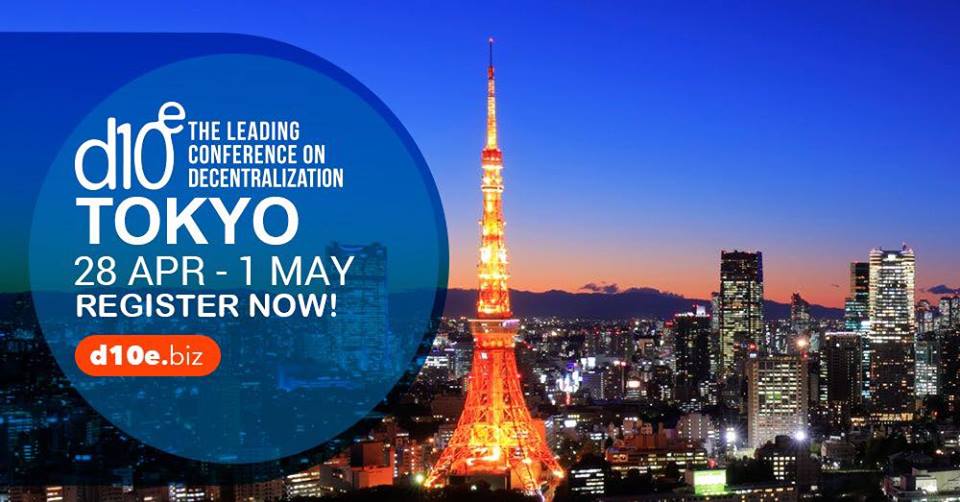 Los Angeles, CA— April 24th, 2018 — Japan, one of the world’s largest cryptocurrency markets and birthplace of bitcoin, will host d10e’s next conference from April 28 to May 1, at Hilton Tokyo Bay. D10e’s Tokyo event is the latest conference in a world-leading series on economic decentralization and this month’s 21st global edition will bring speakers of world-renown to one of cryptocurrency’s earliest adopters.

An innovator within the accelerating blockchain and cryptocurrency spaces, Japan is an established regional leader, attracting more than $4 billion in crypto capital to date. Japan has pioneered Bitcoin adoption and this year’s d10e marks one year since its government officially endorsed digital currencies as a means of payment. Recently, Japan’s ICO Business Research Group worked with the government to legalize ICOs and adopt clear industry practices that encourage growth, while also protecting investors. Once adopted, these rules will further establish Japan’s status as one of the world’s leading cryptocurrency and blockchain development centers.

Just as Japan has evolved to become a leading fintech and cryptocurrency market, d10e is no longer only a conference for learning about the latest in blockchain and ICOs. d10e is also a leading hub for investment opportunities and a PR machine for each edition’s winners. Following the success of its previous ICO pitch competitions, with investment prizes ranging from $100,000 to $400,000, d10e is running its 21st global edition on May 1st in Bitcoin’s birthplace, Tokyo. Pitching entrepreneurs will have a chance to win ⅓ of the $100,000 investment prize pool, provided by members of the Blockchain Investor Consortium (BIC).

During the weekend of April 28 and 29, d10e will provide the ideal networking space for participants to engage with crypto investors, local communities, and international thought-leaders, all while discovering the charms of Japanese culture. Pitchers may use these activities to establish valuable connections, and win the hearts of judges and other investors at the event, or lay the groundwork for more significant projects or investments.

d10e conferences have been at the heart of disruptive fintech, blockchain, and decentralized technology since 2014. With events hosted in Amsterdam, Bucharest, Davos, Gibraltar, Kyiv, Ljubljana, San Francisco, Seoul, Silicon Valley, Singapore, Tel Aviv, Vilnius and Warsaw, d10e is now the leading conference on decentralization, exploring the future of fintech, ICOs, blockchain, the sharing economy, and the future of work and culture.