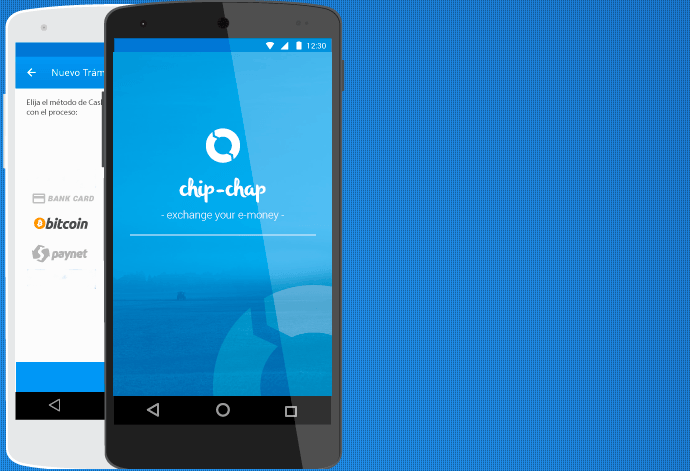 The e-wallet Chip-Chap is a digital system which allows to manage and interconnect traditional banking platforms with virtual currencies, such as Bitcoin. Not only can the user buy and store Bitcoins in the App, but also exchange them back to Euros and withdraw cash from bank ATMs

The difference to other already existent e-wallets on the market is its comprehensive and unparalleled offer which makes it one of a kind. Chip-Chap is unique in its variety of mobile options ranging from storage and exchange of digital currencies over money transfers to commerce transactions and ATM withdrawals.

This digital wallet makes decisive contributions to the challenge of financial management via mobile phone, which is why its presentation date was embedded in the context of the Mobile World Congress 2016 in Barcelona. Álvaro Gijón, Chip Chap’s CEO: Chip-Chap is a multicurrency system which will soon accept more currencies such as Faircoin and Eurocat, the future digital currency of Cataluña.

This wallet requires no intermediaries as the user can buy Bitcoins via Credit Card and send them directly in a secure and low-cost way. In case cash is needed the user can easily exchange Bitcoins into Euros and withdraw money at the next ATM of the Spanish Hal Cash system. The offer to withdraw money without Bank Card but simply by using a SMS is possible thanks to a platform developed by spanish bank network.

The spread of digital currencies allow for a more transparent and secure economy based on the technology Blockchain, which sustains Bitcoin. In addition, this technology avoids that the user’s transaction money remains with the big companies or banks, as it is in the current traditional system.

Additionally, the user can create a virtual VISA by using Bitcoin and conveniently pay in all E-commerce shops accepting common credit card payments. Finally, Chip-Chap goes beyond e-commerce and tackles the so far unresolved issue of mobile payment in physical stores. Chip-Chap allows its users to pay in any store accepting cryptocurrency transactions.

Chip-Chap is a company founded in Spain and specialized in different digital management services and money transfers. Since November 2015 Chip-Chap and Bitchain collaborate in projects linked to the cryptocurrency ecosystem. The development of the e-wallet forms a part of the business lines coordinated by both companies.

The Catalan company Bitchain is responsible for distributing the Bitcoin ATMs in different locations in Spain. The Start-Up is a Spanish pioneer in the consulting services, solutions and developments in the Bitcoin ecosystem. Also, it developed diverse business lines in order to implement the use of virtual currencies in Spain, as for example the pilot project of a POS suitable for the use of Bitcoins in physical commerce.

Tags: bitcoinBitcoin newsbitcoin walletChip-Chap
TweetShare
BitStarz Player Lands $2,459,124 Record Win! Could you be next big winner? Win up to $1,000,000 in One Spin at CryptoSlots