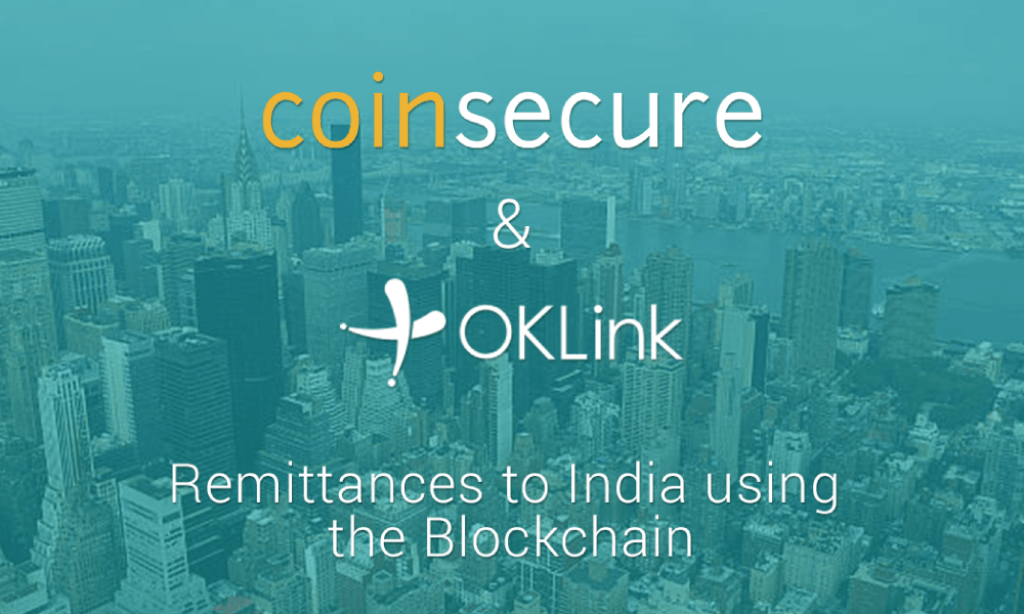 September 21, 2016, Delhi, India – Coinsecure, the Indian Bitcoin company announces a new partnership with OKLink to offer blockchain technology powered remittance services in India. The newly launched OKLink is part of OKCoin’s initiative to provide digital assets and blockchain based global transaction settlement system. With India being the largest inward remittance receiving country in the world, this partnership marks a huge milestone for Bitcoin and blockchain technology.

The partnership was first announced by Coinsecure’s co-founder and CTO, Benson Samuel and OKLink’s Chief Strategy Officer, Jack Liu at the recently held IMTC Asia Conference in Delhi. The landscape of remittance related opportunities over blockchain technology was covered in “Pioneering Remittance Opportunities & Challenges of Innovators” panel during the conference.

Both teams from Coinsecure and OKCoin’s newly created network, OKLink acknowledge the potential of blockchain to transform global remittance. Both, emerging key leaders in the Bitcoin exchange space acknowledge the need to leverage the blockchain technology to expedite and reduce the cost of daily remittance.

“We at Coinsecure not only recognize Bitcoin as the most important application of blockchain but also its potential role in alleviating global transaction woes and expedite remittance. Coinsecure is thrilled to partner with OKLink to provide faster and cheaper services to the Indian population,”

Since Bitcoin’s inception, the financial and remittance sectors are taking a closer look at blockchain, its underlying foundation. The blockchain as an open public ledger of all Bitcoin transactions provides an open source global platform for payment and remittance companies to utilize.

While speaking about the new partnership Mohit Kalra, Coinsecure’s Co-Founder and CEO said,

“Remittance will work over the network created by OKCoin called OKLink. It will enable Indian citizens to send or receive funds either in Bitcoin or Indian Rupees from countries around the globe such as China, Hong Kong, Korea, Canada, Philippines and many more.”

“Coinsecure is the leading blockchain company in India and their commitment to our network is further validation for us and our shared vision of leveraging the trust of the Blockchain to improve the end remittance experience for the Indian people,”

The new service for Indian citizens will soon be made available on Coinsecure’s website, followed by its mobile application. Coinsecure will offer the services at an industry’s lowest fee of 0.5% as against tradition rates of 3-5% with a proof of work over the blockchain network.

Founded by Benson Samuel and Mohit Kalra with the mission of “Connecting India to Bitcoin”. Coinsecure works on educating and enabling individuals and businesses in India to leverage upon Bitcoin and blockchain technology. The company is responsible for the country’s first and only INR based blockchain explorer, an open order book exchange with REST API, mock trading platform/testnet, paper wallet services, an online wallet service and merchant payment gateway. Coinsecure has successfully created a strong foothold in India with the highest liquidity and volumes in India. Coinsecure’s head office in Delhi houses the banking, compliance, accounts, legal, management and advisory teams whereas the Development Center in Bangalore is responsible for building and managing all the company’s products.

OKLink is a blockchain money transfer network that gives every remittance and payment company the same cost advantage, global reach and speed of Western Union. Launched in August 2016, OKLink is growing rapidly with its services available at over 100,000 locations in five different countries. With new corridors being added weekly, the company expects to cover over 60 countries by the year end.


Learn more about Coinsecure at – https://coinsecure.in/

Coinsecure is the source of this content. Virtual currency is not legal tender, is not backed by the government, and accounts and value balances are not subject to consumer protections. This press release is for informational purposes only. The information does not constitute investment advice or an offer to invest.

Tags: bitcoinBitcoin IndiablockchainCoinSecure
TweetShare
BitStarz Player Lands $2,459,124 Record Win! Could you be next big winner? Win up to $1,000,000 in One Spin at CryptoSlots