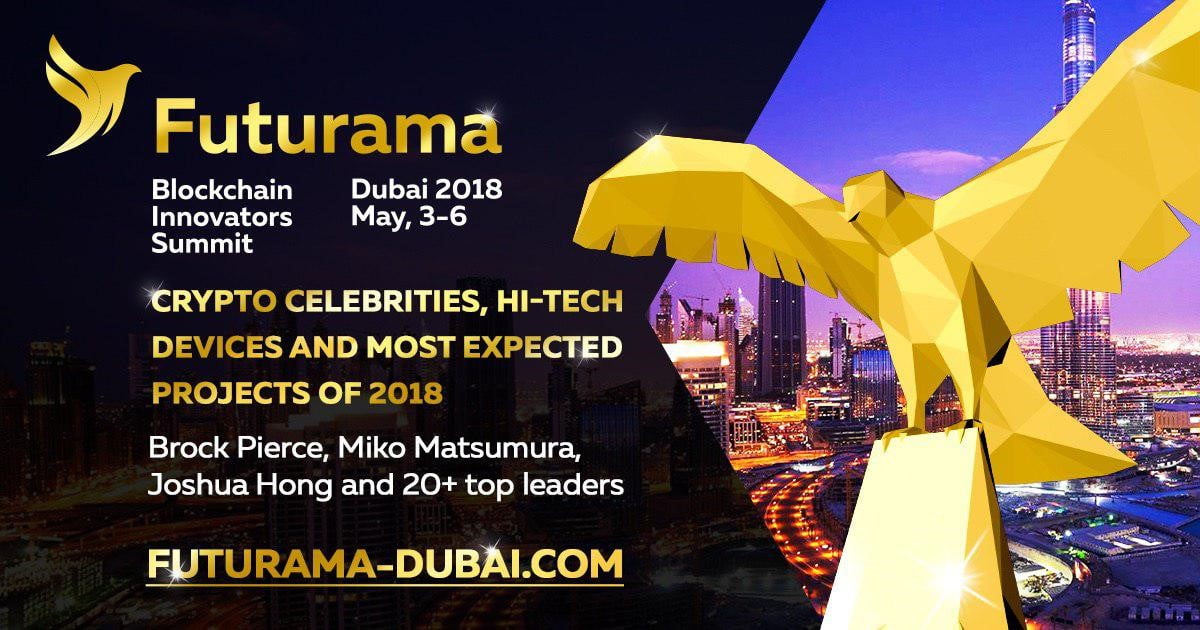 What kind of transport will we use to get to work in 30 years? What that seems crazy and improbable now, will enter our life and become its integral part? Do you want to know right now? Then buckle up for 3-days trip!

The Futurama Blockchain Innovators Summit – the most anticipated event of 2018 by Coinsbank, which will be held already next weekend in one of the most high-tech cities in the world, Dubai. You will be immersed in the exciting world of the future with its constantly evolving blockchain technologies, artificial intelligence, and virtual reality. World-famous speakers will show you that some of the episodes from the “Black Mirror” are much more real and realizable than one might think: learn all about the latest technologies, from the threats of social networks to the AI usage in health industry.

Among the speakers of the summit will be both top keynote speakers Brock Pierce (Bitcoin Foundation, Block.One founder) and Miko Matsumura (Evercoin exchange), as well as world financial funds and exchanges Stephen Stonberg (Goldman Sachs), Alex Lee (Bithumb), Roger Benites (BitInka, InkaPay), as well as popular YouTube bloggers and media industry leaders, like DataDash and AltcoinBuzz. Here’s what one of them says, Miguel (Francis) Santiago, American TV Host & Producer of “Cryptolium” currently airing on RT International:“Perhaps Futurama can set a new format on what it is to be a part of a blockchain community that can empower like minded spirits by gathering the creme de la creme of the industry in some pretty amazing settings. I am really looking forward to this both professionally, emotionally and as a blockchain media producer – visually!”.

The coverage of this event will be attended by the largest crypto media, such as CCN, Bitcoin.com and NewsBTC.

Such a futuristic atmosphere of the summit will be joined by the most daring projects that have already managed to conquer a wide audience all over the world: an unmanned convertoplane with the world’s first vertical take-off and landing technology – Vimana Global, and capsules hovering through a network of low-pressure tubes between cities and transforming travel time from hours to minutes – Hyperloop.

Evgeny Borisov, CEO of VIMANA, has plans to modernize the urban transport system with their Five element film-like device:

“We have a vision to provide a turnkey Urban Air Mobility solution to governments to alleviate traffic congestion in Smart Cities. This will provide a reliable, safe and innovative public transportation system that will benefit an entire city’s population.”

Vimana can serve the on-demand side of urban transit by offering fast, clean, efficient and safe UAVs. A team of aerospace engineers, led by Evgeny Borisov, is currently developing two and four-seater UAVs, which will be used for transporting passengers, in particular in Dubai. Vimana will use blockchain technology to enable the management of its fleet of UAVs. Each UAV will become a node on the blockchain, thus creating a worldwide, ubiquitous blockchain-based, air traffic control system across Class Bravo (ground to 2,000 meters) urban airspace.

Are you ready for the future? We are taking off!

Connect with the best. Network in the desert. Fly with the loftiest on a hot air balloon. Yacht like nothing can stop you with the most futuristic boat in the world. We will show you what the best blockchain innovators can do today.

Join the most exclusive blockchain event in the most technologically perfect place on the planet. Don’t miss the future! Join now – COINSBANK.COM/DUBAI

Only for NEWSBTC readers 25% discount is available for any of packages.
4 days left to pack your bags for a flight to Dubai.
Grab the last ticket and network with those who earn millions!
USE Coupon Code – NEWSBTC