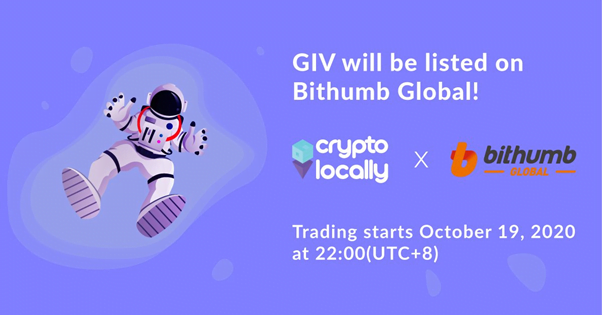 October 19th 2020: Peer-to-peer cryptocurrency trading platform CryptoLocally announced today that it has listed it’s native token, GIV, on Bithumb Global. CryptoLocally recently held a private sale for GIV, followed by the successful GIV Bonding Curve Distribution Event which allowed the public to purchase the token as well. In the near future, CryptoLocally plans to allow the CryptoLocally community to have more influence over the governance of the platform through GIVernance. The release of the Finance Wallet, CryptoLocally’s DeFi feature, has been the first step toward the company’s goal of bringing DeFi to the masses and making financial inclusion possible. Soon, in addition to earning interest on ETH, DAI, USDT, USDC, UNI and GIV which is already possible through the Finance Wallet, users who invest into vault pools will be able to optimize yield through CryptoLocally Vaults (CLVs), non-custodial smart contract-based algorithms deployed across multiple chains.

These recent developments and planned features related to GIV will be strengthened by GIV’s listing on more exchanges. For this reason, this first listing on a centralized exchange is important to the future growth of the token and the CryptoLocally platform. When asked about the significance of the partnership with Bithumb, Jae Chung, Co-Founder and Chief Engineer at CryptoLocally, stated:

“ We’re very excited to have Bithumb Global as our very first centralized exchange listing partner for GIV. Both CryptoLocally and Bithumb Global have been growing extremely quickly in the last year, and we hope this partnership will fuel this growth even further.”

It is clear that being listed on its first centralized exchange, and one that has a current cumulative transaction volume that has exceeded 1 trillion U.S. dollars, will help CryptoLocally and GIV grow faster. Trading GIV will now be much easier for the GIV/CryptoLocally community.

A DeFi feature, the Finance Wallet, was recently added to the platform, allowing users to earn staking rewards on ETH, DAI, USDC, USDT, UNI, and GIV.

As the first P2P exchange to integrate a DeFi feature, CryptoLocally is leading efforts to create a decentralized financial future that is inclusive and easily accessible to anyone.

Why Andre Cronje Believes DOGE Is Good For Crypto