EDDASwap is an ecosystem of DeFi and NFT platforms. The ecosystem consists of the flagship multi-chain DEX, an NFT platform, a Decentralized Launchpad, and a Decentralized Asset Management platform. EDDASwap has an all-star team and prominent partners, including Polygon (or Matic, as it was formerly known). EDDASwap has all the characteristics to be considered a blue-chip project in the making, and this article takes a deep dive into the EDDASwap ecosystem, each of the platforms, and the EDDA token.

At the core of the EDDASwap ecosystem is the EDDA token. Recently, many DeFi or NFT tokens have launched, but most offer almost no real benefits or functionalities to their holders. However, the EDDA token is designed to offer unparalleled utility, and accrues several benefits to token holders. 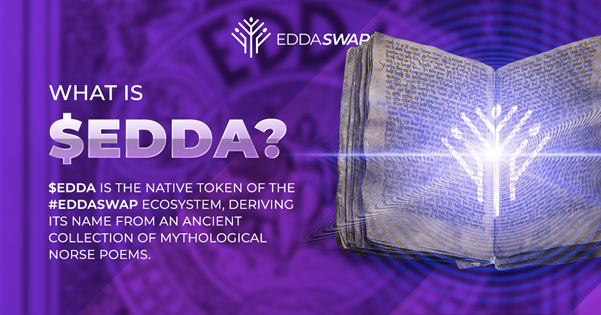 Essentially, buying and holding EDDA allows token holders to benefit from all of EDDASwap’s platforms in unique ways. Before delving into each platform closely, the following is a summary of the benefits each of the platforms accrues to EDDA tokenholders:

EDDA’s tokenomics are completely unique, and have been strategically designed to maximise value accrual to the EDDA token. EDDA will forever have a fixed supply of only 5000 tokens. Therefore, EDDA is an ultra-low supply token, positioning it as one of the most scarce tokens on the market.

Bitcoin’s success has reinforced one very fundamental economic concept. Put simply, provable scarcity is valuable. As an example, today a lot of people aspire to own one full Bitcoin. And just like how only 21 million people in the world can own one full Bitcoin, EDDASwap takes this several notches higher, as only an exclusive club of 5000 people will be able to own one full EDDA! 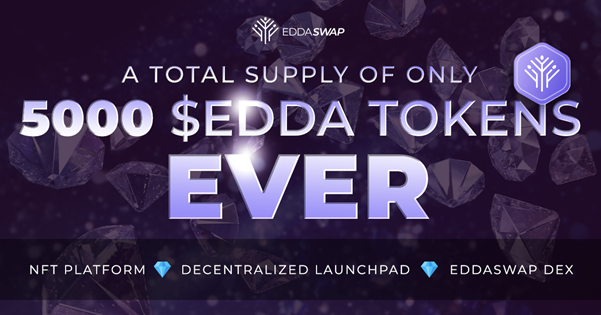 However, as a clarification for those less familiar with cryptocurrencies, unlike stocks, cryptocurrencies can be fractionally owned. You don’t need to necessarily own one “full” EDDA. So even a buyer that doesn’t have a significant sum of money to spare can still buy a fraction of EDDA and receive the exact same benefits. 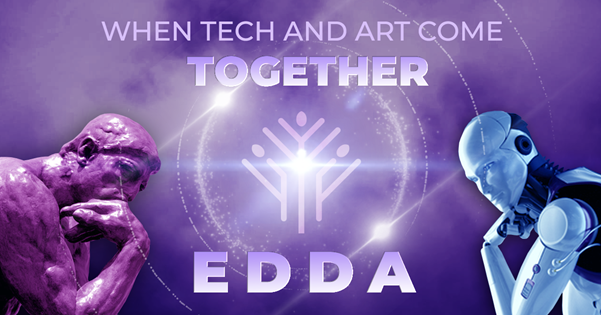 NFTs are one of the hottest trends in the world right now, and they have quickly become the gateway drug to enter the cryptocurrency markets. EDDASwap’s NFT platform, which is already live, combines the advantages offered by NFTs with the rapidly growing digital art and collectibles industry, creating innovative possibilities such as tokenizing works of art and real-world collectibles.

On NFT marketplaces like OpenSea and Rarible, top quality NFTs by such leading artists are commanding mouth-watering valuations. As an example, one of the limited edition NFTs from EDDASwap’s platform recently sold for over $14,000 on OpenSea. And the best part is, EDDA token holders that use the NFT platform are getting all of these NFTs for free!

The multi-chain DEX is EDDASwap’s flagship offering, supporting trading crypto assets on all leading blockchains such as Ethereum, Binance Smart Chain, and Polkadot. The Binance Smart Chain version of the DEX will be the first to launch, which will soon be followed by an L2 DEX, for which EDDASwap has partnered with Polygon.

An important takeaway from EDDASwap’s plans for their DEXs is the core focus on security. EDDASwap is implementing “Liquidity Lock”, an optional feature whereby anyone that lists their token onto the EDDASwap DEX will have the ability to lock in the liquidity for the token for a designated period of time. Every project that wishes to legitimize themselves will be able to make use of this feature to create trust, and provide token buyers some much-needed security.

Another important aspect is how the DEXs benefit the EDDA token holders. The answer lies in an elegant system, whereby a fraction of trading fees that are generated on all of EDDASwap’s DEXs will be used to automatically market-buy EDDA Tokens, that will then be distributed to EDDA Token holders that have staked their tokens. Therefore, as EDDASwap grows and trading volume increases, the EDDA Token holders will be the ultimate beneficiaries. 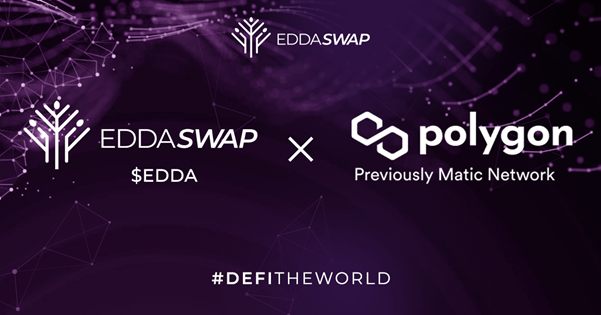 EDDASwap has secured several prominent and top-tier partnerships. The biggest one of these is EDDASwap’s partnership with Polygon. EDDASwap is going to implement Polygon’s L2 scaling technology to bring unmatched speed and scalability to EDDSwap’s platforms.

EDDASwap’s flagship DEX is the first platform EDDASwap is building on Polygon. Powered by Polygon’s scaling capabilities, transactions on the EDDASwap L2 DEX will incur almost no gas fees (less than $0.0001 per transaction), and transaction finality will be lightning-fast. With other major DEXs in the industry struggling with high fees, and delaying their L2 implementations, the EDDASwap DEX will have a huge competitive edge, by offering unparalleled scaling without compromising on decentralization. To bootstrap liquidity on the EDDASwap DEX, Polygon is going to run a liquidity mining campaign to incentivize liquidity providers after the DEX’s launch.

The extent of the partnership doesn’t just end there though, as EDDASwap is also going to make NFTs universally accessible and affordable for everyone, by expanding their NFT platform onto Polygon. In EDDASwap’s upgraded NFT platform, the process of minting and transacting with NFTs will be exponentially cheaper and faster. V2 of EDDASwap’s NFT platform is also under development, and will bring entirely new primitives to the NFT industry, including the merging of DeFi with NFTs. EDDASwap’s proven success in the NFT space, combined with Polygon’s scaling technology, will take NFTs to the next level.

The EDDASwap journey has just started

For a project that launched just about two months ago, EDDASwap has clearly achieved a lot already, and has been delivering on their roadmap and surpassing expectations at each stage. This article is merely an introduction to the project and doesn’t even begin to encapsulate the full scope of what EDDASwap is trying to achieve. To conclude, EDDASwap has all the potential to become one of the next major blue-chip projects, in both the DeFi and NFT spaces. As their tagline goes, are you ready to #DeFi the World?