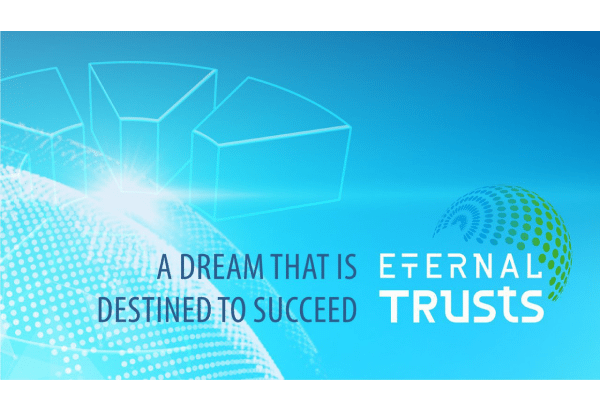 Eternal Trusts is the world’s first blockchain platform for deferred purchase of currently unavailable biomedical and other services. The platform allows you to program future transactions on smart contracts and perform them when it becomes available, legal and conforms to ethical standards.

Did you know that there are 16.5 million millionaires alive in the world today and at least 10% of them will go incredible lengths to radically prolong life and improve its quality? However, money can’t buy you services that have not been approved by regulators or are inaccessible due to imperfections in the legislative framework, or require additional research. This problem can be solved by using a platform where anyone can preset the goods and services necessary to them and pre-program an automatic purchase of future services via smart contracts. Computer algorithms designed to conclude and maintain commercial contracts using blockchain technology can exist for any length of time, which means that once the deal becomes possible, it will be completed, no matter how long it takes to make the service possible.

Such a platform is ideal for performing time-deferred actions with biomaterial. In the present day, with the development of cryoprotection technology and cryoprotectants, freezing has become safe for the biomaterial – the cells do not get damaged and can be stored in a dormant state for many years… However, no company can offer its customers cryofreezing or de-conservation in the time period that they require. And why enter cryosleep if you can’t leave it? The answer is obvious. The Eternal Trusts project allows us to ensure the contracts are fulfilled and makes it possible to restore the customer, rather than simply store his biomaterial for an infinitely long time…

In order to ensure the execution of transactions in the future, Eternal Trusts creates discretionary trusts for the clients – legally, these are structures that protect the assets stored inside from any claims from third parties. Money from trusts can be spent only for the needs and purposes of the client. Such assets are located in the most reliable banks and are managed with reliable long-term strategies. This is one of the main advantages of the trust: sooner or later, the amount of money contained in it will be sufficient to complete any transaction, provided it is feasible and a suitable contractor for it is there along with the necessary technologies. For a more colorful demonstration of this, here’s a quick example: in 1626, the American Indians of the Delaware tribe sold Manhattan Island to the Dutch for 60 guilders (about $30 at the time). This transaction is traditionally considered one of the most unsuccessful in the history of commodity-money relations. But if the Delaware were familiar with the banking system and received payment for the land in money and put them in the bank for at least 10 percent per annum, their deposit would now grow to about 504 quadrillion dollars. If a trust is used, it is only a matter of time before it is possible to purchase the required service or product in the future. Eternal Trusts automates this and other transactions necessary for the welfare of the client. That is, trust management of assets is carried out until the algorithm of autonomous fulfillment of objectives on the basis of an annual analysis of potential contractors issues a verdict that the goal designated by the client is achievable.

Integration of blockchain technology into the field of trusts allows the company to reform the industry that is more than 800 years old – after all, trusts appeared in the early medieval (XII-XIII centuries) in England. The use of decentralization technologies helps get rid of the human element, that is to create a perfect system potentially consisting only of a client and a computer, into which he will input his objectives, goals, dreams, and lay down a certain algorithm for their implementation. Then after pressing the proverbial “Start” button, an autonomous process of achieving the set goal begins. In this design Eternal Trusts acts as the creator of infrastructure, which will eventually realize someone’s dream of flying to Mars, or waking up filthy rich in a 1000 years.

To show the versatility of the project, the authors have already announced the launch of a bounty program, according to which tokens will be awarded to customers for successfully formulated and detailed fragmented goals, tasks and dreams.

And by the way, Eternal Trusts has already been presented at Coinagenda investment conference in Puerto Rico mid-March, where it was well received by the audience.