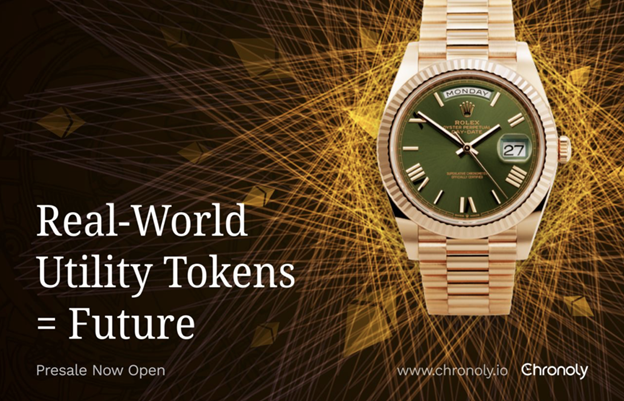 Amid the turmoil in the crypto market, many cryptocurrencies are coming up with new updates on their platform to sustain their presence. Ethereum (ETH) and Algorand (ALGO) are the major cryptocurrencies that have recently launched new updates to minimize losses and attract users and investors.

Then, there is Chronoly.io (CRNO) – a project that has displayed exceptional growth. Chronoly.io’S (CRNO) pre-sale has made the project prosper with a dream run appreciating by 690%. Investors are hopeful for the project’s further growth in the coming months.

One of the most anticipated events in the history of the crypto world, the Ethereum Merge, was successfully completed on September 15, 2022. With the Merge, the Ethereum Network (ETH) has successfully transitioned from the proof-of-work to proof-of-stake consensus mechanism. This update aims to reduce energy consumption and supply of Ethereum’s ETH token.

The Ethereum Network (ETH) underwent an upgrade to address the long-standing criticism it faced and increase its adoption. Since the proof-of-work consensus mechanism requires significant power consumption, several people, including dApp developers, have criticized Ethereum (ETH) for being an ecological threat. Therefore, to increase its adoption among dApps and metaverse developers, Ethereum (ETH) has opted for this Merge.

However, Ethereum (ETH) still needs to work hard to cover its gigantic losses. After the Merge, the price of Ethereum (ETH) rose for a short period before declining again. Cumulatively, Ethereum’s price has fallen by 17% in the past week. Currently, it is trading at $1337.88, which is 70.56% below its all-time high of $4891.70.

The growth of Algorand (ALGO) has followed a mixed path of red and green for many months. Though the overall market sentiment has revived in recent months, Algorand (ALGO) still has a lot to cover. Algorand (ALGO) aims to become a platform that offers faster transactions, using Proof-of-Stake (PoS) as the consensus algorithm.

To increase the trade volume on the platform and attract more investors, Algorand (ALGO) has also launched a new update, Falcon. The update aims to improve the usability and sustainability of Algorand (ALGO) in a post-quantum computing era. However, investors are still not convinced with the project, given that it has suffered heavy losses lately. At the time of writing, Algorand (ALGO) was trading at $0.3144, about 91% below its all-time high of $3.28.

Chronoly.io (CRNO) is a digital marketplace that enables retail investors to make a fractional investment in luxury watches from high-end brands like Rolex and Patek Philippe. Following a simple process, Chronoly.io (CRNO) procures luxury watches from multinational brands and mints fractional NFTs against the timepieces, allowing users to make investments for as low as $10.

These watch NFTs of Chronoly.io (CRNO) have the backing of physical watches stored in the real world’s secured vaults. It makes the price of CRNO directly proportional to the value of luxury watches, which have historically seen an appreciation. It grants Chronoly.io (CRNO) protection against any market crash.

Soon after its launch in May 2022, Chronoly.io (CRNO) became the apple of investors’ eyes as CRNO holders have received a return of 690% on their investment in just three months. CRNO holders are also allowed to stake their tokens in Chronoly.io’s (CRNO) lending pool to yield extra income. Given that several investors are dumping other cryptos to invest in Chronoly.io (CRNO), experts believe that CRNO can grow by 2,500%-5,000% in the coming months.