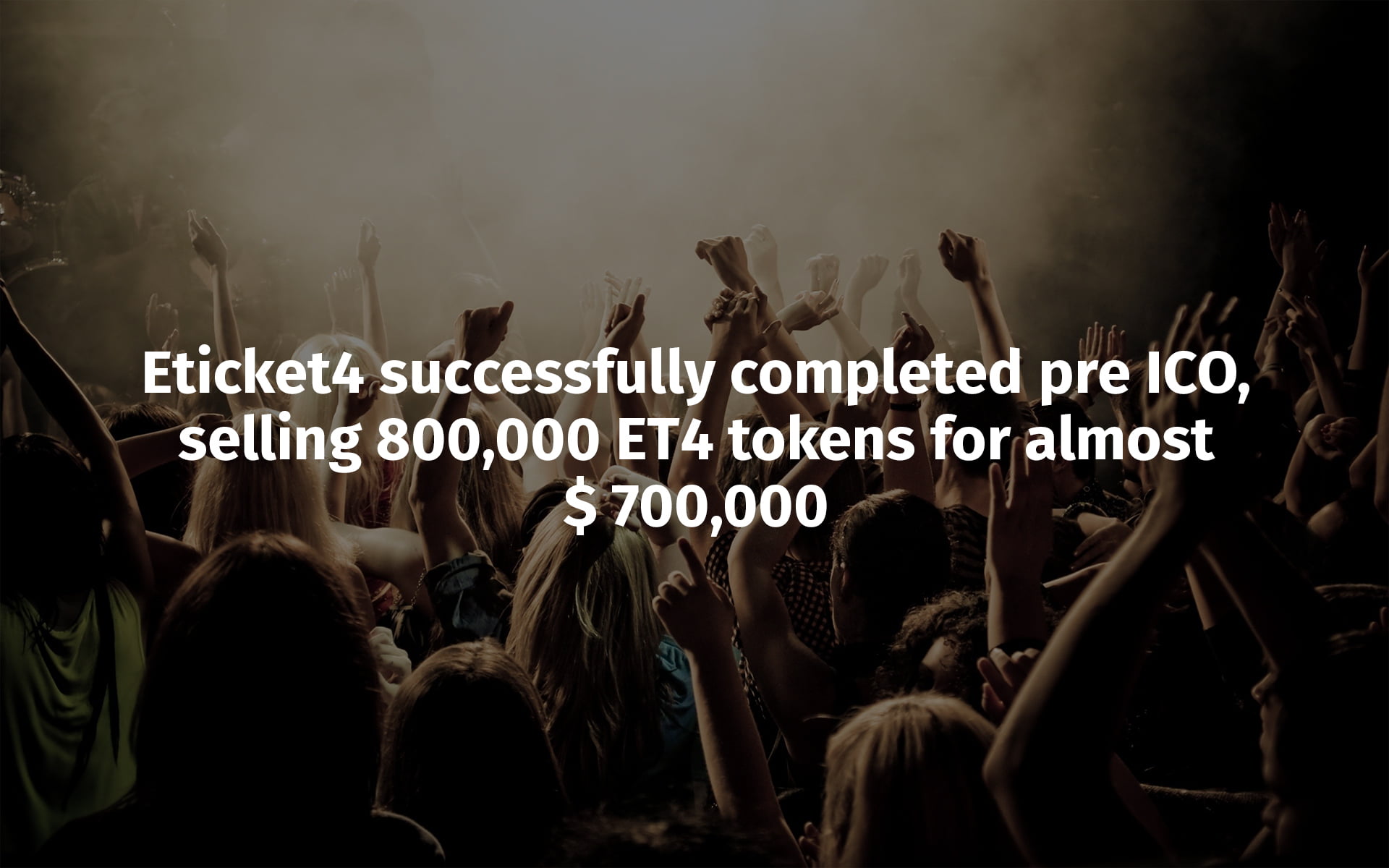 Eticket4, an international p2p-marketplace for buying and selling tickets for sports, music, theater and other events to secondary market participants, completed pre-ICO 9 days ahead of schedule, selling all 800 thousand tokens. At the current rate, the company managed to attract almost $ 700 thousand.

Eticket4 held a private sale on 30 and 31 January, and on 1 February began pre ICO. For two weeks, the company sold 799,540 tokens ET4 (excluding bonuses). It was planned that the pre-ICO would continue until February 21, but the hard cap – 800,000 tokens – was reached earlier.

Tokens ET4 were sold at a price of 1/1000 ETH. Buy ET4 tokens could be for BTC and ETH. During the pre ICO, 155 investors from all over the world invested in the project. For participants in the pre-sale of tokens bonuses were provided, which could reach up to 30%, depending on the volume and time of investment. During the private sale, all investors received 40% bonuses.

Now Eticket4 is preparing for the ICO, which is scheduled to start on February 27. All investors who register in the whitelist before the campaign will receive a bonus of 10% ICO’s soft cap – 100 ETH, hard cap – 13 800 ETH, maximum number of ET4 tokens – 30 million. The price of the token is fixed and equal to 1/1000 ETH. Under the terms of the smart contract, all unsold tokens will be burned after the completion of the ICO.

During 2018, the company plans to scale the platform to international markets. The first steps in this direction were made last year on the eve of the Confederations Cup, which took place in Russia: the p2p-marketplace Eticket4 earned in the CIS and Eastern Europe. To date, with the help of the platform, over 80,000 tickets have been sold for a total of over $ 2.3 million.

The ET4 Token is a utility-token with which buyers can receive discounts on tickets, sellers can access the expanded functionality of the analytical cabinet and conclude forward contracts, and event organizers through smart contracts regulate the secondary ticket market for their events, and receive a commission from secondary transactions.