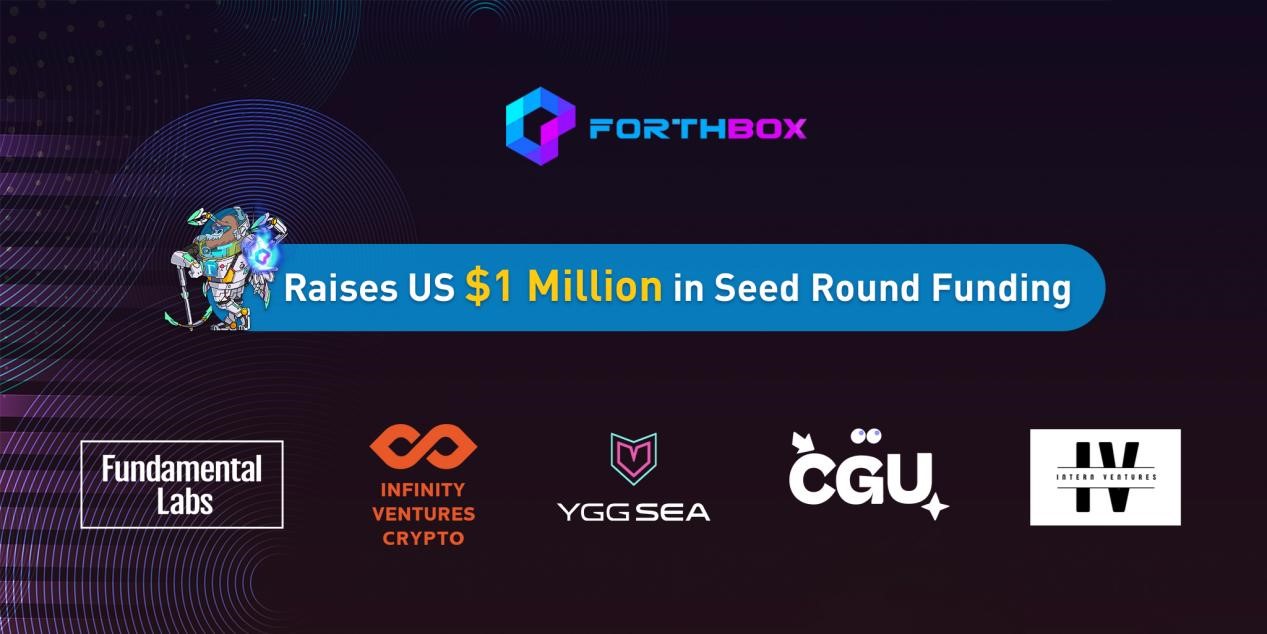 ForthBox Closes US $1 Million Seed Round, funded by Fundamental Labs and other VCs

ForthBox, a Web 3.0 GameFi aggregation platform, today announced that it has raised US $1 Million in Seed funding, backed by renowned venture capitalists and institutions like Fundamental Labs, Infinity Ventures Crypto (IVC), YGG SEA, Crypto Gaming United (CGU) and Mr. Block. Fundamental Labs is an Early-Stage Investor of well-known blockchain projects like Coinbase, Avalanche, and Polkadot. Earlier this month, Fundamental Labs was the lead investor of Binance.US seed round financing. The raised funds will be allocated to accelerate the process of product development, scale up the marketing and technical team and build a more complete ecosystem for all the users on the platform.

The mission of the ForthBox team is to build the first GameFi+NFT+ SocialFi aggregation platform in the world and ultimately, users, developers, and game guilds can find their places in the ForthBox ecosystem.

For game users, ForthBox offers an all-in-one app that is tailored for game players and helps them seamlessly experience various blockchain services, like game center, game Dapp browser, and multichain wallet. These features will help traditional game users easily access the blockchain game. Also, 15 self-operated games will shift players from one game to another and give more choices for them.

For game guilds, they could adopt the smart management system developed by ForthBox team. With this system, guilds could have access to many smart features, like automatic reward distribution, game data visualization panel, One-click management of scholar accounts etc.

ForthBox has established a strategic partnership with YGG SEA and Crypto Gaming United (CGU). They will work together to bring more P2E games to global users.

YGG SEA, the first subDAO of Yield Guild Games (YGG), is a decentralized autonomous organization for acquiring and managing NFTs used in the Metaverse. Its mission is to create the biggest and most sustainable play-to-earn virtual economy in Southeast Asia. It has attracted more than 5000 active scholars and over 40 supported games.

YGG SEA will purchase a total of 1500 game NFTs of the very first blockchain game Space War launched by the ForthBox platform, in batches, with a total value of $650,000. YGG SEA will invite its guild members to participate in the game and promote ForthBox in 8 Southeast Asian countries and regions.

Crypto Gaming United (CGU) is a platform that brings people from developing countries together to build a new virtual economy and earn a sustainable income while learning new digital skills and engaging with the global blockchain gaming community. Since first exploding into the Philippines and Russia, CGU has expanded into emerging markets across Africa, Asia, Europe, and the Middle East with sights set on the democratization of earnings for people across the globe.

Up until now, ForthBox has attracted users from more than 10 countries such as South Korea, Japan, and the Philippines. The average daily traffic of its Dapp is over 2 million. ForthBox has an extreme burning mechanism for its tokens and now more than 72 million tokens have been burned (accounting for 55% of in circulation).