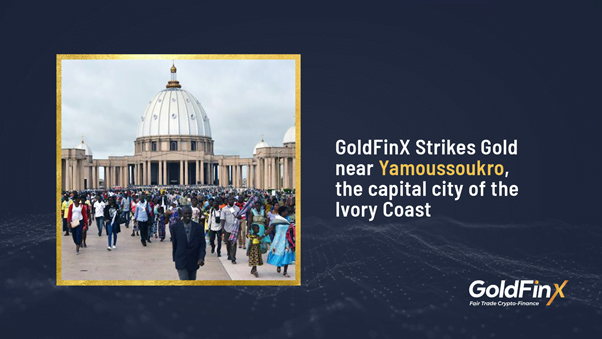 GoldFinX Strikes Gold near Yamoussoukro, the capital city of the Ivory Coast

GoldFinX  – A digital asset powered by Goldmines and Blockchain draws a favorable strategic partnership and collaboration by landing itself into a goldmine deal with a brand new concession at Yamoussoukro, near the Ivory Coast’s capital city.

The new partnership implies GoldFinx is literally sitting on a goldmine. With travel restrictions further easing out, the influx of the vaccine, and an expectation of a resumption to normalcy, GoldFinX expects a revival in mining prospects worldwide.

“All our hard work in 2020 has led us to this great opportunity”, says CEO Philippe Bednarek. “The new area is a highly coveted region of the country, and our team diligently secured the rights to begin operations there next month.”

The novel deal is already showing promising figures. An archetypal yield of a typical artisanal gold mine hovers between 0.5 – 0.8 per metric ton. But with the new concession in the picture, the concentration of gold in this area is forecasted to be as high as 4 times the typical concentrations. The GoldFinX team is optimistic about the new concession, and their team is already on site.

After reviewing its detailed research and due diligence, GoldFinX estimates an increase in equipment is needed if they want to fast-track production immediately after the monsoon season concludes in January. As such, their lab, with a diverse team of professional experts, has decided to install two new gravity separators during this month. This will help them rev up and accelerate the production of dry flakes and extracting impurities. It will pave the way towards better and methodical production planning for Doré bars.

With blockchain technology gradually becoming omnipresent and the recent rise of cryptocurrency as the latest financial assets class, GoldFinX believes it will go to great unimaginable heights in the years to come. Its blockchain solution also ensures that there is complete transparency of all financial transactions relating to GiX. The technologies at GoldFinX are oriented towards ensuring that Gold production is trackable right from the extraction stage to its sale to any corner of the world.

The new concession is an excellent turn towards a new-age disruption in the Gold-mining scene. The area had been struggling of late with chronic political troubles. The Ivory Coast Presidential elections in the fall of 2020 were filled with uncertainty as the parties did not agree with the final election results. Also, their neighbors in Guinea were witnessing protests over their national elections as well. Last year was indeed challenging for GoldFinX, considering the surging tensions in the region. And with the rising cases of the Coronavirus and new variants coming up, uncertainty was looming in the air.

But as things are settling down to normalcy and finding a point of equilibrium, GoldFinX hopes that this year, which has already started on a great note, continues to bring great news amidst the challenges that lie ahead.