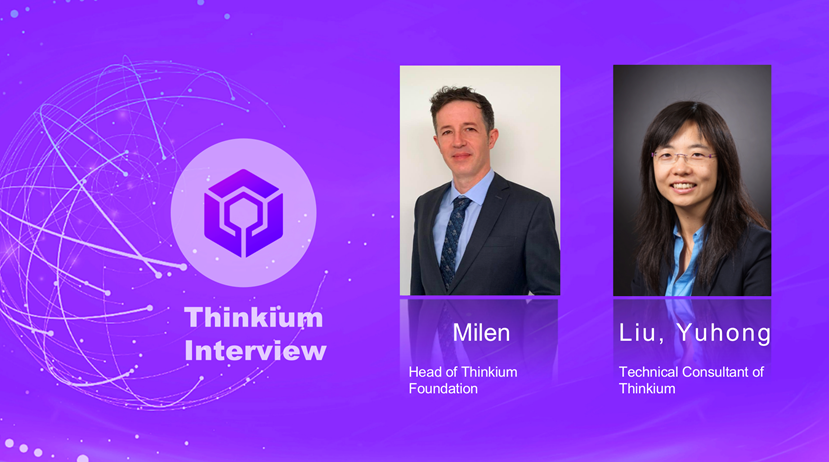 Given BTC’s current drawdown from its all-time highs and the sharp shift from greed to fear, investors seem to have overreacted to this month’s crash, as is usually the case when leverage and speculative sentiment reach similar extremes. In this case, the call for rationality and value return should be paid more attention to.

Thinkium is an all-around public blockchain network, which achieves unlimited scalability at a linear cost by running through a multi-layer multi-chain structure and integrating Layer1 + Layer2 technologies. When hype and fraud causing a temporary clamour, Thinkium concentrates on technology for five years, and has come up with a number of significant innovations. Recently, Thinkium has attracted high attention on communities and medias.

In the conversation with Thinkium, we focused on analyzing the pain points of the current public chain industry, in-depth discussion of its technology and how to achieve it, and why Thinkium was able to achieve amazing price and market value performance against the current.

One fundamental challenge is system scalability

According to Professor Liu, Yuhong’s opinion, one fundamental challenge is system scalability. The existing public chain products are incapable of supporting the implementation of large-scale Internet-level applications, and the limited basic capability of blockchain seriously restricts its ecological development.

Various projects have attempted to address this issue from different angles, while most of them are not very successful. This is because the scalability of the public blockchain, as a fundamental infrastructure, cannot simply rely on the development of a single technology or some special ad hoc treatments. The feasible solutions should focus on technical development path and architectures that can be universally applied. Only such solutions can achieve stability and efficiency in comprehensive systems to allow diversity, complexity and scalability. Furthermore, improving the scalability of the underneath layer includes not only high TPS, but also the balance between high TPS and the corresponding cost increases, and flexible extensions to facilitate massive complex upper layer applications.

Emerge as the times require, Thinkium born. “High level speaking, Thinkium aims to build a public blockchain infrastructure to facilitate Internet level large-scale applications and bridge the physical world and the digital world to launch the era of Web 3.0.”

What we highly concern is in the technical aspect, how could Thinkium realize its vision. Professor Liu has made a thorough understanding of Thinnium with several innovations.

The first one is its unique design of a multi-layer multi-chain structure, which can theoretically achieve unlimited scalability through the separation of subchains from the main chain, inheritance of child-chains from their parent chain, intra-chain sharding, and cross-chain communications.

The second innovation is the Aplati tree, a flat tree structure that enables unlimited logical layers via the implementation of two types of chains: the main chain and subchains. Logically, both the main chain and a subchain, as a parent chain, can create arbitrary number of child-chains to share related businesses. Physically, the parent and child-chains can be implemented as independent chains, with their relationship recorded and maintained only on the main chain, which simplifies the management. The Aplati tree significantly improves cross-chain efficiency.

The third innovation is a four-layer stack architecture with each abstract layer focusing on its own logic tasks and consensus mechanism. Such design makes it easy and flexible for future system extension and upgrade.

The fourth innovation is the Actor-based parallel processing model, which greatly improves the execution efficiency of tasks, enables Thinkium to carry large transactions more efficiently, supports the operation of complex applications with large numbers of users, and paves the foundation for the business projects of blockchain, which were originally limited by technical maturity. In particular, the Actor-based parallel model enables asynchronous messages for the execution of complex logic and avoids low-efficiencies caused by different locking mechanisms in conventional parallel models. In this model, transactions involving a set of accounts are divided into multiple steps in the form of messages. Each message is received by a unique main subject and executed by the corresponding chain. A transaction is completed only after all the messages have been executed.

Last but not least, a fair community environment can be established through the Themis network, a comprehensive governance mechanism involving votes from all network users.

When hype and fraud causing a temporary clamour, Thinkium concentrates on polishing technology for five years, and has come up with a number of significant innovations. Furthermore, Thinkium’s price and market value are stable compared to a great many projects in this tough market situation, and it even hit a historical high in early days.

Milen, Head of Thinkium Foundation, tell us that after the reaching the peaks of 65K , Bitcoin just recently tested 30K levels for short time. This means, that market is still immature and major manipulations are still possible.

The current crypto market needed this correction, in order to create new sustainable support for future growth.  “There too many new crypto project without sustainable tokenomic model use literally no cases.  Speculative elements cause high volatility, which is not a suitable option for traditional finance investors. I am still bullish in long term , but market needs to identify quality blockchain projects, before moving forward.”

In this light, Thinkium blockchain seems one of those projects , who is making solid step forward a long term sustainable blockchain ecosystem. Recent increase if TKM price is just logical reflection of very professional backstage work from the team and community.  Only few project can claim the prize of being very low correlated to BTC and going to regular and stable growth. This growth is based on high security, scalability and timely transactions. As Thinkium ecosystem expands, we can expect more positive news and moves for TKM token in the future.

Thinkium currently has 23 data nodes, 198 consensus nodes (including 155 mine pools), and more than 10000 monthly active users. In the near future，the independent single chain will open to the outside world, providing the ability to build an independent single chain, helping users to use Thinkium blockchain quickly at low cost and docking with wallet, game, DeFi, business and other decentralized applications.

Narrated by Milen，although Thinkium’s TPS exceeds 100,000, which is currently higher than any public blockchain, Thinkium firmly believes that Thinkium’s biggest competitor is itself, so only if it is good enough can it attract users.“Although BTC and ETH are very powerful, they also have major shortcomings. Its path cannot be copied and is growing dynamically. What we need is comprehensive transcendence and target the next stage of blockchain rather than compete others to a single weakness. Fortunately, the world is open enough, assets can circulate freely, and so is the ecology.”

Nowadays, people still focus on currency. However, the connection between the digital world and the physical world is not taken seriously. Public blockchain ecology is a hierarchical system, which mainly focuses on the bottom and middle layer that remains a elatively closed world. At present, it needs a more scalable bottom layer and enough middle layers to connect with the outside world and solve problems. How to integrate the digital world and the physical world is the next stage of the public blockchain and Thinkium itself aims at the next stage. It may take times but that’s the value.