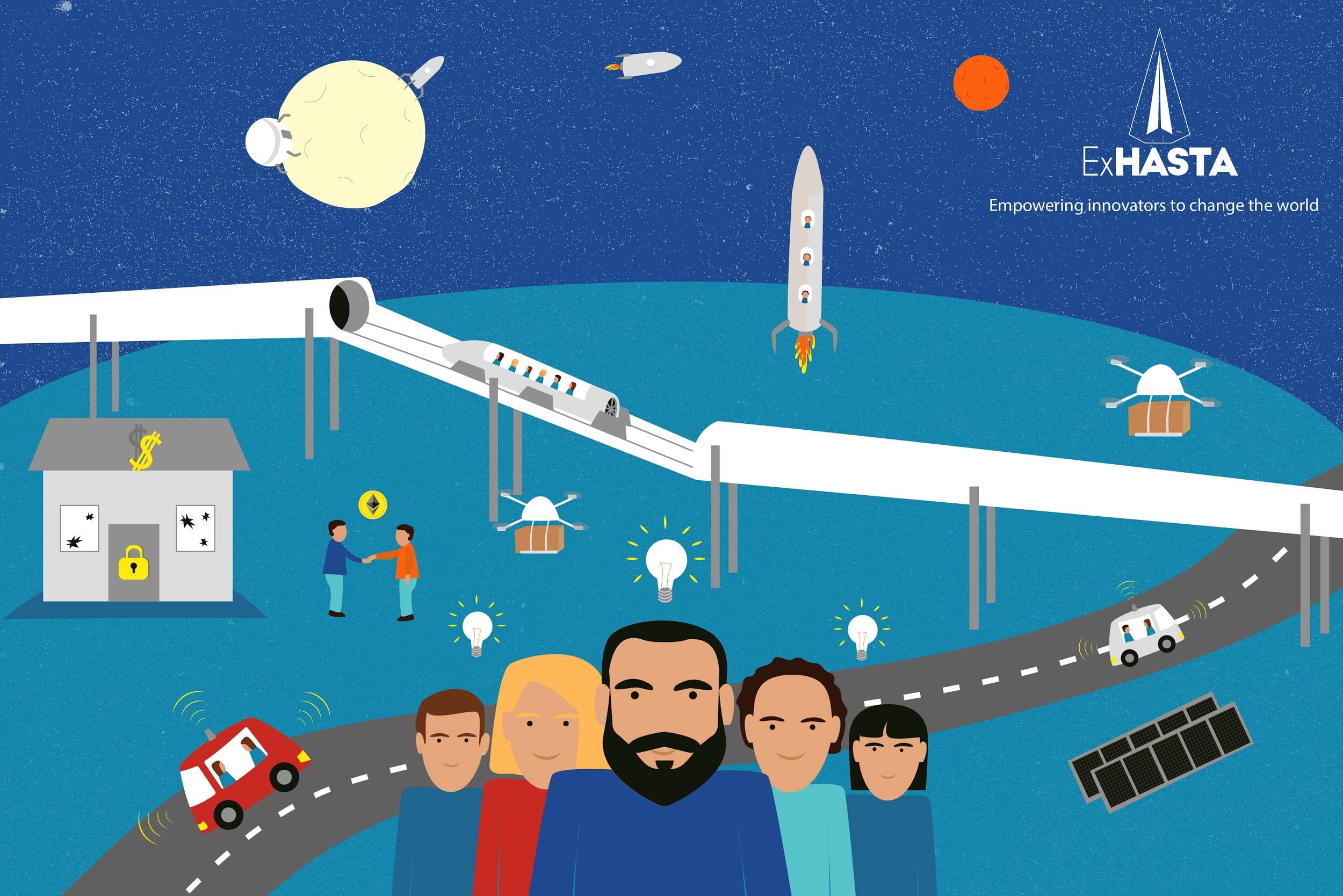 We all daydream about the future.

About AI – controlled cars, humans living on the Moon, robotic pets; about the end of fossil fuels and of centralized data storage. These all imply high – impact technological projects. Let’s call them Moonshots, and they sure sound great.

But who’s funding them?

Governments or universities? Not anymore. Big corporations? Scarcely. We all know Elon Musk and his Hyperloop project, but little else. Big venture capital? Sometimes, but with many restrictions.

Here’s the thing: through Blockchain, some of the world’s sharpest innovators have just changed this game.

Meet ExHasta, a platform to develop Moonshots, distribute their key elements (all intellectual property: source code, hardware specs, patents) and train innovators around the world to use them.

And you can invest in their ICO today.

A three-step plan to revolutionize the future

To change the world we need technology.

But not just that. This technology has to be applied to a specific problem. And that problem must first be identified (and its solution too).

But it’s much more than that. Why do you think there are few Moonshot projects being worked on a big scale?

It’s because most businesses have to focus on ordinary, dull development. They hardly find time (much less budget) to fund radical, high-impact projects.

ExHasta aims to change that.

What about a complex and ever-evolving public transit system based on artificial intelligence? ExHasta is the team to make that a reality.

And in the process of developing this ambitious solutions, high quality intellectual goods are produced, such as:

But they don’t plan on keeping these.

When ExHasta claims it wants to change the world, it means just that. That’s why they are obsessed with the future.

But there’s a problem with changing the world: it’s just too big to do it alone.

This is where ExHasta Catalyst (one of the two components of ExHasta) comes in.

ExHasta Catalyst is an intellectual property marketplace. An environment where all those intellectual goods from the Moonshots will be auctioned, sold and finally distributed.

But the IP won’t be traded for money (at least not directly). Remember this is a Blockchain platform, so it uses their own currency: EXH Tokens.

With them, businesses and innovators can acquire the tools ExHasta has produced and use them to create change in the world.

Will they be ready to use them?

ExHasta Meridian has their backs.

Meridian is a month-long, all expenses paid training summit. 20 people attend each, selected and voted by members of the community (EXH Token users, mainly).

At these summits, innovators will:

How will ExHasta pull this off?

The four key qualities of the team behind it

The people behind ExHasta form a transdisciplinary and international collective called function(core). Their main drive is purpose.

And they are very serious about being transdiciplinary.

They’re led by Elburz Sorkhabi, a musically trained global futurist and tech entrepreneur and count in their ranks an awarded science communicator – engineer (with a PhD), a business analyst with a Master’s degree on particle physics, a biologist/architect serial entrepreneur, and we could go on with seven others.

And that’s not counting their top-notch, pioneer advisors.

What do you get when you mix all these brilliant people?

And where do these people work?

They behave like non-newtonian fluids. That means they’re liquid when they can, and solid when they need to.

Spread around the globe, they work remotely in a round-the-clock schedule.

There are no seniors and no juniors. No corporate pyramid structure. They all work at unison to solve the puzzle.

Depending on needs, they also gather (spatially) to form units, called cores (hence the name). And flexibility breeds creativity. Versatility allows them to confront all kinds of Kevinchallenges.

What do they have to show for it?

They have more than 20 years of effectivity working for big, demanding clients.

Want to see their work? Before ExHasta, their more creative and artistic projects were channeled through nVoid, an art-tech symbiont company. Here’s a video of their jaw-dropping achievements.

How will they approach Moonshots?

They have developed (with time) a framework to achieve their more challenging goals. They are masters in their multiple trades, and this framework is the path to their victories. Elburz (ExHasta’s CEO) has explained it in length, and with two real examples of Moonshot projects.

As he has also showed, the main fuel that makes Moonshots fly is a clear and profound understanding of current capabilities and trends in technology.

Well, that, and deploying a world-class team.

And who will benefit from all these?

What’s in ExHasta for users and investors?

Obviously, the general beneficiaries of Moonshots are ordinary citizens from around the world.

But the main players in the ExHasta platform will be its users.

Members of their community can use EXH Tokens to purchase Moonshot intellectual property. With it:

And of course, attend ExHasta Meridian’s Summits and overhaul their skills and networks.

Well, EXH Tokens are currency, so they are also meant to be traded.

That means their value is not determined by their initial sale price, but by the value of the platform itself. They get their value from the intellectual property generated, and the empowering capabilities of the summits.

How much valuable can intellectual property be? Well, answer this: Do you think a section of Google’s search algorithm is valuable? Or the specs to build an iPhone?

Here’s the link to their website:www.ExHasta.com/

Until October 26th, 19:00 UTC, a VERY limited amount of Tokens will be available. And at a 30% discount.  All purchases are in Ethereum, through a smart contract address.

You can get all the details on ExHasta by reading their Whitepaper, or learn more from Elburz in his Ask Me Anything Thread or listening to the interview he just gave.

And don’t forget to follow ExHasta’s official social media platforms, where you can ask any questions as well.