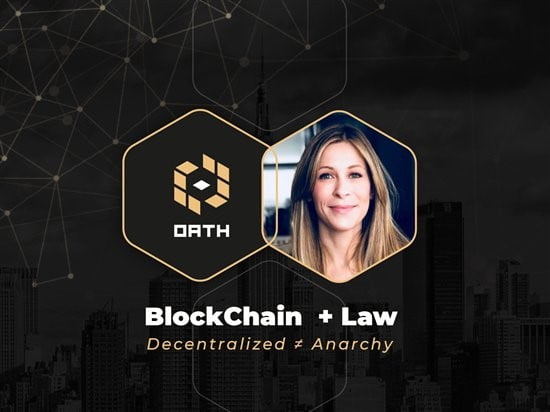 Jenny Vatrenko, an experienced high-stakes commercial litigator and former assistant district attorney in Brooklyn, New York, is joining the Oath team as co-founder and head of their US office.

The Oath Protocol is a blockchain dispute resolution and governance protocol.  It is a cross-chain infrastructure layer between chains and dApps that uses a decentralized juror community to provide a just, efficient, transparent, and extensible community decision-making mechanism on the blockchain.  By providing a mechanism to challenge undesirable counterparty behavior, Oath adds an additional layer of security to public chains and dApps, acting as an insurance protocol to protect users’ rights and assets.  The Oath protocol may also be used in a variety of scenarios and on any public chain that requires community input, such as governance and oracle services on the blockchain.

Jenny joins Oath’s founding team from Heyi Blockchain Advisory Group, where she advised blockchain startups and established companies in the US and Asia on business and legal strategy.  Prior to Heyi, Jenny spent six years at Boies Schiller Flexner – the most prominent litigation firm in the US – working on some of the most high-profile disputes of the past decade, including the valuation of AriZona Iced Tea company, Bill Ackman’s pyramid scheme allegations against Herbalife, and the Sony Pictures hack.  Her experience encompasses all stages of litigation, from inception to trial, across state and federal courts as well as alternative dispute resolution programs. She has also spent one year at the District Attorney’s office in Brooklyn, NY, where she prosecuted misdemeanor offenses in the sex crimes bureau, leading several cases through successful jury trials.

At Oath, Jenny will focus on building strategic relationships and growing Oath’s team and community in the US, as well as working with the founding team to fine-tune and perfect Oath’s protocol.  Here is what she had to say about her new endeavor:

Jenny Vatrenko: I am thrilled to begin this journey and use my legal background and experience to work on Oath’s much-needed protocol for resolving simple smart contract-related disputes that also has a much broader application to any kind of community decision-making on the blockchain.

Our protocol is based on the common-law jury system, meaning that a group of peers (the jury) gets to decide the outcome of a dispute. Our settings and algorithms ensure that the jurors are selected randomly from a diverse jury pool (within certain parameters that can be set by the parties) and do not serve on more than one jury together; that the jurors’ identities are concealed from the parties to preserve objectivity and eliminate external influence; and that judges are rewarded for making the right decision, building up their reputation level in the community.

There are many other use cases and implementations for the protocol aside from dispute resolution, namely, any instances that involve the need for community decision-making on the blockchain, such as public chain governance or oracle input.

I am excited to be working alongside our brilliant and remarkably global team – we all have international backgrounds and experience and are located around the globe – to make Oath the dispute resolution and governance protocol of choice for public chains and dApps. We just made a step in that direction by partnering with QuarkChain, and we look forward to building more strategic relationships in the months and years to come!