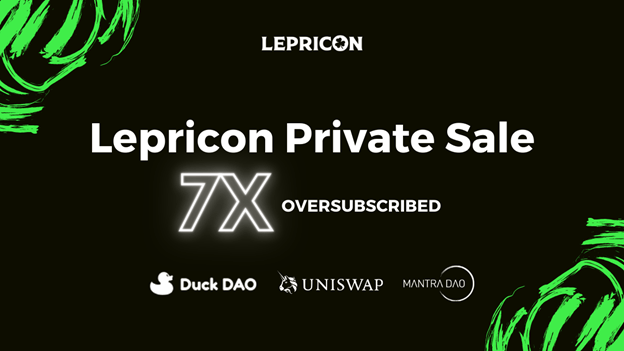 Hong Kong – March 08, 2021 – Lepricon Technologies, a community-governed prediction games platform, announced that it had closed all seed and private token rounds and that the total amount of tokens applied was seven times that which was available. Lepricon also announced the dates for their two upcoming public token sales and planned listing on Uniswap.

The public sale dates are:

Lepricon’s L3P token will open for trade on Uniswap on Wednesday, March 17th at 5 pm UTC.

“We are an entertainment company that believes gaming is the first killer app that will take Decentralized Finance mainstream,” said Joshua Galloway, Founder& CEO of Lepricon. “Mainstream gamers understand in-app purchases, in-game currency, and rare and unique game items. Lepricon will present crypto-currency and NFTs to them in that way, so they encounter them in a context they find meaningful.”

Lepricon will launch its first game, KQJ, a simple card prediction game that offers the chance to buy bitcoin at a discounted price at the end of March 2021. In the second quarter of this year, Lepricon will release Bitpool, a bitcoin price prediction game. The next quarter, the company will release FansPredict, which will focus on real-world events and esports.

Lepricon has entered into several strategic partnerships to enable the rollout of its gaming and DeFi services. One is with RioDeFi, a company developing a Polkadot Parachain that allows high-speed transactions with significantly reduced gas fees. Another is with MANTRA DAO to provide Lepricon’s first staking platform so that holders of L3P can begin to earn yields ahead of the gaming platform’s launch later this year.

Lepricon is a community-owned and governed prediction games platform that allows stakers, developers, and gamers to enjoy the benefits of DeFi in a gamified way, backed by a vibrant community in which all participants receive rewards for positive contributions and interactions.

Lepricon is a Decentralised Autonomous Organisation (DAO) – an organization represented by rules enshrined in computer code; transparent and controlled by the network participants and not by a central authority.