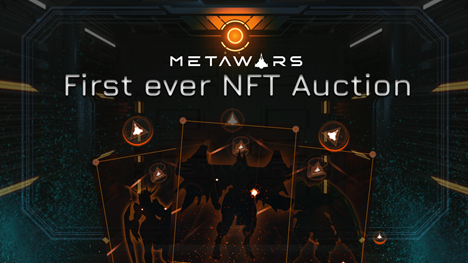 MetaWars is a play-to-earn online game where players are able to compete with the universe or each other. The in-game items are all NFT backed, meaning that everything in the game can be tracked and traded via blockchain technology.

The game aims to revolutionize the online gaming industry via the use of NFTs and blockchain technology. As such, MetaWars will be hosting an auction for in-game items prior to the launch of their online game.

MetaWars is a futuristic sci-fi online game using the play-to-earn model where all in-game items are backed by NFTs. Players focus on space exploration, to discover different galaxies, unlock mysteries and grow an intergalactic empire.

Players will be able to explore an entire galaxy to collect resources for personal gains or trade. Through MetaWars, everyone can create a powerful industrial base and control the game’s metaverse.

MetaWars will support different game modes. Offer in-game rewards backed by NFT technology that will give players the chance to collect unique items or trade for real monetary value.

The economy is supported via $WARS token. This token will allow players the ability to trade in-game, stake to generate yield, and vote on the burn rate of the token. Metawars also incorporates the use of in-game tokens $GAM, providing players with the ability to level up their equipment to assist in combat.

The project has also scheduled their upcoming TGE to be on the 27th of October, further details can be found on Metawars’ official social media channels.

The gaming industry is thriving, and as a result, investors are on the hunt for blockchain-based games that allow them to earn rewards while simultaneously learning about cutting-edge technology. They should keep an eye out for the MetaWars NFT auction, which begins on 21th of October and runs until 27th of October 2021. Players can earn NFTs that will drastically boost in-game experience. The NFTs are divided into two types, each with three tiers containing rewards ranging from mechs, to weapons and blueprints. Moreover, a bonus lucky draw is set up joining by tickets, selecting 6 random winners who are not in the top 40% and top 10.

Crates are rewarded by bidding and there are three available tiers for bidders to win.

Legendary Mech Crate has the most valuable reward. The top ten bidders who invest a minimum of 6.5 BNB will receive the Legendary Mech and additional resources (such as weapons, gems and blueprints), which enables early advantages. Bidders who fail to get this mech and fall out of top 40% will receive 11 lucky draw tickets.

The next 15% of bidders who place an order of at least 2 BNB will receive the Mythical Mech Crate. The crate includes a Mythical mech with resources practically similar to the Legendary Mech Crate.  Bidders who fail to get this mech and fall out of top 40 % will receive 4 lucky draw tickets.

The Epic Mech Crate will be given to the next 25% of bidders who submit a bid of at least 1.5 BNB. Containing an Epic Mech and additional resources.

Resources play a vital role in the world of MetaWars. The Blueprint Crates include exclusive resources for the game and can be used to redeem Mech. By bidding up to a certain amount, any bidder who bid above the minimum requirement can reward the crate.

Bidders can receive the Epic Supply Crate at 1 BNB. Containing an Epic blueprint and an assortment of resources such as weapons, gems and elements. With 6+1 lucky draw tickets in addition.

The Ultra Supply Crate can be received by bidding more than 0.5 BNB. The crate contains an Ultra-rare blueprint and similar resources as the Epic Supply Crate. With 2+1 lucky draw tickets.

InReceived by bidders bidding more than 0.2 BNB. Containing a Rare blueprint and other resources with 1 lucky draw ticket.

There is less than a week before the auction ends, to read more about the auction, see here. To know more about Metawars’ updates and developments, visit their social media channels below.

MetaWars is a play-to-earn next-generation blockchain-backed gaming experience. Explore and battle throughout the universe. Fight, trade, and earn robots, ships, and planetary terrain backed by NFT in-game items. The $WARS token will become the anchor of an entire universe up for grabs.