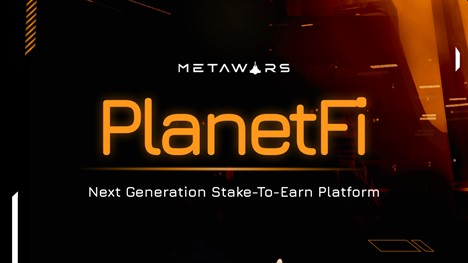 MetaWars sets up to combine the Metaverse and GameFi and introduce PlanetFi in this billion-dollar industry, allowing players to move assets freely between different blockchain games.

The project is using the Meta (rebranded from Facebook) blueprint to expand on its business model. Under PlanetFi, users can gain tokens from different game projects and maximize their earnings, breaking the barriers between blockchain investing, gaming, and mainstream culture.

PlanetFi is fulfilling a crucial role in the new GameFi ecosystem. It’s set to introduce new projects, attract users, and create an economy of interlinked platforms.

MetaWars aims to propel itself to the next stage by evolving the metaverse ecosystem, providing more value to the industry. For this reason, the platform decided to start a next-generation stake-to-earn platform.

The platform will be there for those great GameFi projects in the future. MetaWars will help them with various support including community assistance, marketing promotion and ICO strategies.

MetaWars has already secured the first project for MetaGods, the first action RPG to be designed as a play-to-earn blockchain game. “MetaGods is excited to launch on Metawars. We believe the community is extremely strong, and by combining forces… we can conquer the metaverse. The in-game economies will be massive! What’s better than becoming a god of a planet?” — Jack, the Co-founder of MetaGods. The plans for  MetaGods are already underway. The platform is already securing future deals with:

MetaWars journey opens a new phase with the first ever stake-to-earn platform and could not wait for more exciting announcements from the project.

MetaWars is a play-to-earn next-generation blockchain-backed GameFi ecosystem. Players can explore and battle throughout the metaverse to make a fortune. $WARS, NFTs and in-game token $GAM can be earned by staking which can be used to earn across the metaverse and in the upcoming strategic RPG.