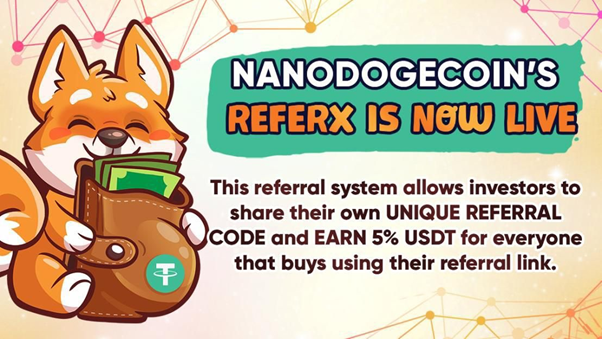 Today, Nano Dogecoin – the cryptocurrency project with a passion for giving back to its community through passive income rewards, has successfully launched a new service they have named “ReferX”.

A simple referral system that is set to entice a stream of new investment opportunities, while also increasing their already large community. ReferX has launched and is set to give their followers another option to make additional USDT passively.

The most recent update to be included in the INDC platform that has the community talking, is their brand new approach to rewards, that encourages not only further passive income potential but community growth at the same time.

ReferX is the brand new referral service that aims to further excel the statement that Nano Dogecoin is the number one crypto passive income project.”

By using this simple referral system, community members and holders of INDC can now use their own unique referral code, to then share with family and friends, or post throughout social media, on pages like twitter, facebook, telegram and discord. This unique referral code enables the referrer to earn real USDT rewards passively, for each and every person that invests into Nano Dogecoin, without any extra steps or effort required.

5% Bonus For Every Successful Referral

At the time of launch, the current rate for the rewards that are available can be rather significant. A 5% portion of every single investment made via their unique referral code, is then rewarded directly into the referrer’s wallet in real USDT.

The more people that an INDC holder can refer to Nano Dogecoin, the more USDT they will earn through the ReferX referral system. The reward potential is only limited to how far a user can share this unique link.

The objective of the INDC community is to make this process as simple as possible, with anyone who currently holds INDC, being able to participate in ReferX.

By giving each holder their own unique code, they are then able to share this wherever they like, to earn the referral bonus on anyone who participates.

The idea of earning passive income through INDC is something the team have kept at the forefront of each development decision made, and are continually adapting their token and project to maximise this potential for their community.

At present, all Nano Dogecoin holders are earning USDT rewards through nothing more than holding their INDC, and it is moves like this that have contributed to their ever-growing community numbers and support.

Holders, investors and their community are seeing the real benefits of passive income through Nano Dogecoin and are taking advantage of the rewards on offer.

For holders that want to increase this earning potential, or would like to earn more than USDT, Nano Dogecoin have also released a revolutionary new Dashboard feature that offers a new array of staking and pooling options that aim to do exactly that.

“Dual Staking” is one feature that has been released recently on the dashboard, that allows stakers to earn INDC rewards and USDT reflections while at the same time, compounding INDC and USDT with zero fees. Simply through staking.

NanoDoge Coin holders who make use of the new dashboard feature will also be able to take advantage of the “INDEX-NDC” feature. Investors now have the option through one pool, to earn multi token rewards like INDC, BTC, ETH, ADA, DOGE & USDT with more options being made available in the near future.

NDC have had a tremendous run over recent weeks with the large amount of community support, as well as the attention they received over recent price action, is evidence that the community team are doing something right.

They have been continuously pushing out update after update, with each one only strengthening their position as the number one charity coin that rewards its investors, unlike any other in its category.

ReferX is just one example of how they separate themselves from the rest.

The non-stop stream of updates are not slowing down anytime soon, and it will pay to keep an eye on where this project is going next. INDC is here to stay, and its current roadmap shows their ever growing community has no desire to be second best.

You can now buy altcoins like $INDC on Altbase – the mobile app for iOS and Android.