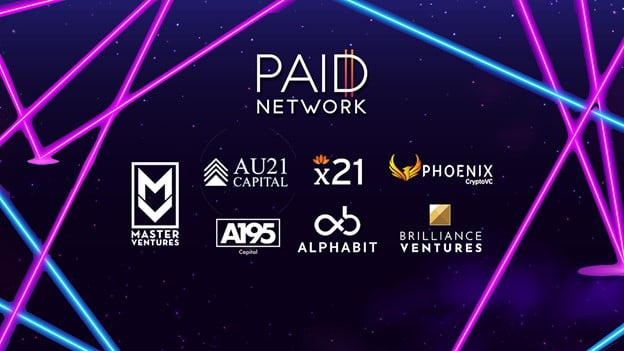 PAID Network (PAID) has closed a $2 million funding round led by the Alphabit Fund & Master Ventures.

Other investors and partners include A195, AU21, Brilliance Ventures, Phoenix VC, and X21.

PAID’s private sale has been oversubscribed, with more than $21 million committed already. According to PAID’s spokesperson, the value of allocation requests is growing by $1 million daily.

PAID Network is using the funds from the recent funding round to continue to build the world’s first decentralized SMART Agreement DApp powered by Polkadot. After successfully launching the PAID Network MVP in December, allowing parties to sign Agreements on the PAID Network, the team has set their eyes on their upcoming TGE (token generation event) coming January 2021. Currently operating on the Rinkeby testnet, anyone can create and sign contracts that are saved on the IPFS/Ethereum network ledger forever and access it via connecting their Ethereum wallets.

“All industries are currently working to migrate their business functions onto the blockchain. Trust in the smart contracting process, at the nexus of transaction management on the blockchain, will be the key enabler of permissionless secure transactions. PAID Network’s SMART customizable contracting solutions make distributed digital contracting trustless and secure. They will allow the deployment of credible self-executing contracts in any use case,”  said Saeed Al Darmaki, Managing Director of the Alphabit Fund.

The close of the fundraising acknowledges PAID’s early mover advantage as one of the first legaltechs using digital ledger technology (DLT) to make business on the blockchain more secure for everyone. The powerful e-signature is backed by negotiation, arbitration and DeFi services — providing an end-to-end contracting solution. The smart contract executes all functions on the blockchain and because the market for blockchain platforms and services is forecasted to grow at a CAGR of 67.3 percent to $39.7 billion by 2025, the PAID team has a headstart.

The PAID Network was launched as a blockchain incubator project by Master Ventures — a venture studio focused on building and funding blockchain projects with a focus on driving mass adoption of the industry. Some notable investments from the venture studio include Coinbase, Kraken, Bitfinex, Elrond, Reef, and Ultra.