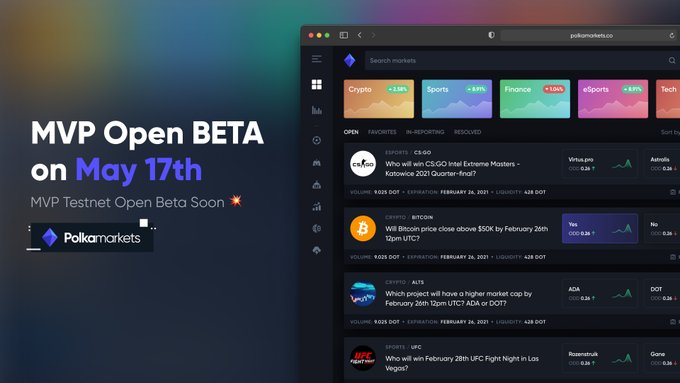 Lisbon, Portugal: Polkamarkets is now opening up its MVP beta platform for testing to the general public. The prediction market company and protocol says that it is looking forward to seeing how well its MVP will perform under greater load and user interaction. Polkamarkets is a decentralised prediction market platform and protocol built for cross-chain information exchange and trading. Its current MVP is now live on the Ethereum Kovan Testnet for any user to test, while previously being closed to whitelisted users only. The company plans on deploying its prediction markets to other chains in the near future, namely Polkadot and Binance Smart Chain.

Building on a successful Closed Beta

Polkamarkets launched as a prediction market project in late February 2021, when it conducted its token sale. Just a few short months later, the team behind the prediction market company has released its testnet MVP. To contrast this, competitors such as Augur, Gnosis and others took years to release any viable release candidates to the general public for testing. The company says that it is confident that the feedback it will gather will further help to polish and refine its mainnet launch product, which is due out this year.

Statistics from the Polkamarkets Closed Beta:

The whitelist-only closed beta for Polkamarkets was able to attract more than 300 simultaneous users to test the platform under load. Those users made more than 2,500 transactions with a total prediction market trading volume of over 1,000 testnet ETH. Polkamarkets’ liquidity provision function was also tested, with users depositing over 200 testnet ETH to the forecasting markets. The team reported that the most popular categories for prediction markets were unsurprisingly Crypto Prices and Esports.

Interested parties who now wish to test the Polkamarkets Open Beta, where there are several open markets in crypto prices and Esports,  can do so at: app.polkamarkets.com

“Today marks a special day in Polkamarkets’ history. Since we launched just a few short months ago, we’ve been working non-stop to get our product out as fast as possible with as much quality as possible.” Says Polkamarkets CEO, Ricardo Marques. “Our team has worked incredibly hard to release iterations of our prediction market technology, and to gather feedback from real users. Today, with our Open Beta release, we are excited to get Polkamarkets out there to a greater audience. We hope that their feedback and input will help us to bring an even better product to market when we release it on the mainnet.”

Polkamarkets is a DeFi-Powered Prediction Market built for cross-chain information exchange and trading where users take positions on outcomes of real-world events–in a decentralized and interoperable platform based on Polkadot.