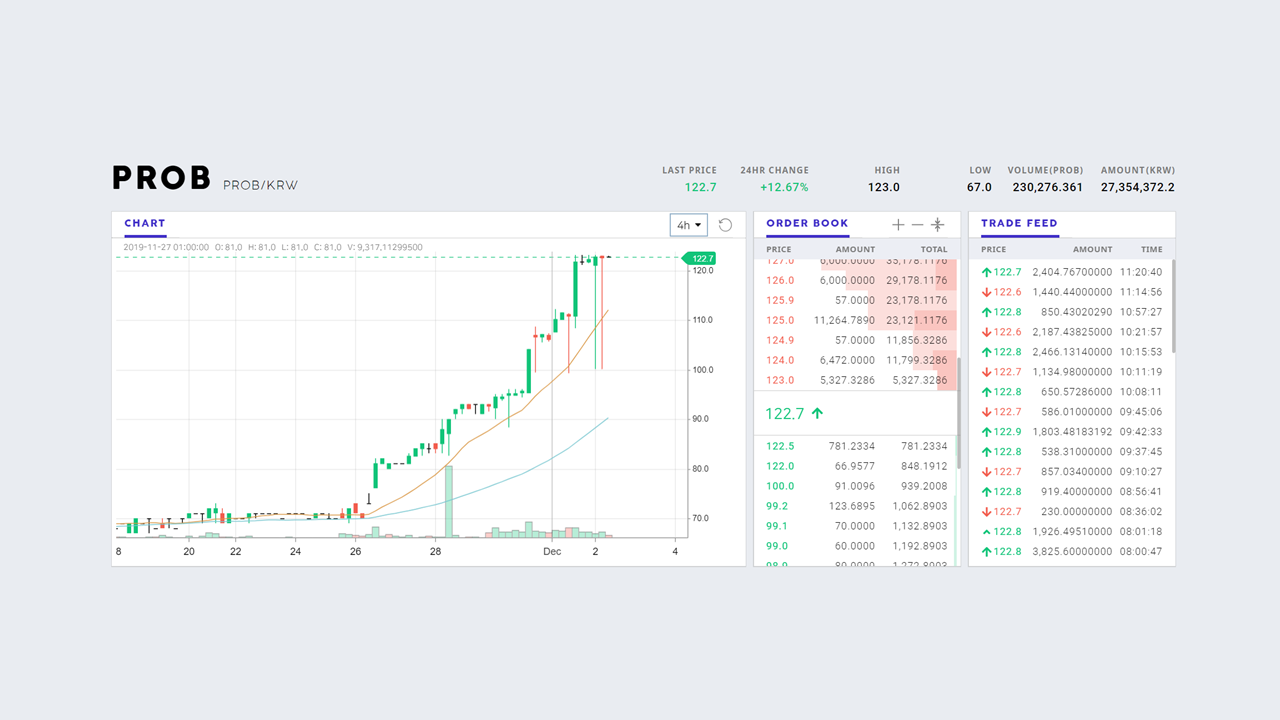 As ProBit Exchange continues to assert its dominance in the IEO scene both locally and globally, the massive growth that has catapulted the comprehensive crypto asset platform has also delivered rapidly growing ROI for the users holding their native token PROB.

While PROB was priced at 67.2 KRW on November 18, that number has vaulted up to 123 KRW at press time. This marks a strong 82.7% increase in ROI for PROB, which is a critical component of the exchange as it provides top IEO bonuses and transaction fee discounts along with other user rewards including trade mining and stake mining.

The spike in the PROB market during the last two weeks would strongly indicate increased endorsement of the platform as inadequate security continue to plague other exchanges such as the recent Upbit hack. ProBit remains the only top Korean exchange to remain impervious to hacking attempts due to its superb security measures and cold wallet implementation.

ProBit has also proven without a doubt that they are the fastest-growing exchange in Korea and the figures help substantiate this claim to fame. They have catapulted to a top 25 exchange when considering traffic metrics and currently have over 215,000 monthly active users. The exchange also boasts a combined 41,000,000 visitor traffic from the top coin market cap raking sites Coinmarketcap and Coingecko.

ProBit Exchange also showed the highest growth rate in the freshly published monthly average visitor growth rate report conducted on the top 20 exchanges in Korea by crypto marketing group Etherlab. ProBit leaped 4 spots over the previous month’s rank, a 25% mark and only 1 of 2 exchanges to show growth in a somewhat latent market.

This incredible growth has been fueled by aggressive campaigning through their IEO and listing services with over 130 total rounds of IEO conducted and delivering healthy liquidity and ROI for the many tokens who have endorsed their secondary market offerings.

Many generous user events such as airdrops, trading competitions, and even IEO rewards events have also helped capture considerable traffic and establish a healthy userbase with ProBit rewarding early adopters for their support.

In celebration of it’s 1 year anniversary and to cap off it’s firm establishment as one of the top exchanges worldwide, ProBit is holding a USDT trading competition and giving away 10,000 USDT to the top 25 traders to thank the community and celebrate the momentous occasion while continuing to ride the wave of momentum into global markets.