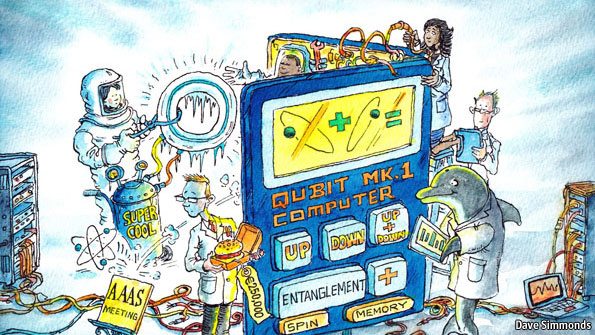 There had been times where the HTTPS protocol was deemed secure. Now gone. We live in times where Bitcoin’s blockchain is deemed secure, and unless 51% attack happens it is safe haven to store wealth in Bitcoin. Yet, in a very near future, that is about to change.

In the last decade, the scientists from US, Canada and Australia have progressed by leaps and bounds in the field of quantum comping. First quantum computers are already being built by Canadian D-WAVE. These luckily have one defect — cannot kill Bitcoin. Yikes!

Worse threat to Bitcoin however is the cooperation of NASA, CIA (read NSA) and Google. The three are building a special 50-qubit strong quantum computer of their own, which will kill Bitcoin. Have they succeeded yet? Unfortunately we will get to know after it’s too late. Google, however is deploying their 49-qubit (weak) version by the end of 2017

We will know after it’s late. Like with the NSA’s exploit ETERNALBLUE leaked by ShadowBrokers hacker group, which gave birth to a massive cryptocurrency botnet in May 2017.

Losing all our cryptocurrency holdings in a brink of the moment is something that can happen. Why is this possible? 50-qubit quantum computers can use Shor’s Algorithm and Grover’ Algorithm to polynomially reduce the difficulty of all of the commonly-used public-key algorithms. This includes RSA, DSA, DH, and all forms of elliptic-curve cryptography. Instead of taking years to break the cipher, it will take hours.

When quantum computers come, you will welcome them with an open hug.

Droplex develops a Public-key blockchain that is secure against QC. Their team together with most Bitcoin experts have agreed on using Lamport signatures. The question however was in deploying it. Because reaching consensus for a much smaller disruption such as blocksize change is a heroic task, the Droplex team has decided to save the day on their own! Developers are creating their own cryptocurrency running on a quantum resistant blockchain.

Droplex team includes experts from the field of Quantum Computing from the US and Australia. In whitepaper, they explain how Lamport-Diffie and Winternitz one-time-signatures can be leveraged to create quantum resistant blockchain.