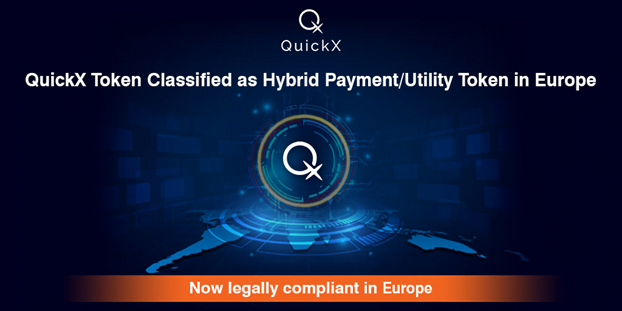 QuickX is an accredited token that has been listed on four globally renowned exchanges and is currently one of the top mid-cap currencies across the globe. The partnership between QuickX and the team of acclaimed legal attorneys was entered into to ensure that QuickX is legally compliant in Europe as well.

Upon the partnership with the third party law firm to attain the legal classification of the QuickX Token as per the final synopsis shared in accordance to the local European laws, QuickX is not a Financial Instrument and is a Hybrid Payment/Utility Token. The final outcome was based upon a thorough and resolute process following analysis of the QuickX’s whitepapers, associated social accounts and in depth research of the company associated personnel.

QuickX has been in the crypto currency market from over a couple of years now and from every time to time it ensures that the legal compliances are met globally as well as specific to various countries. This time the initiative was taken to attain the classification in Europe. QuickX is currently in talks with many top exchanges and soon the QCX token will be listed on many more global exchanges.